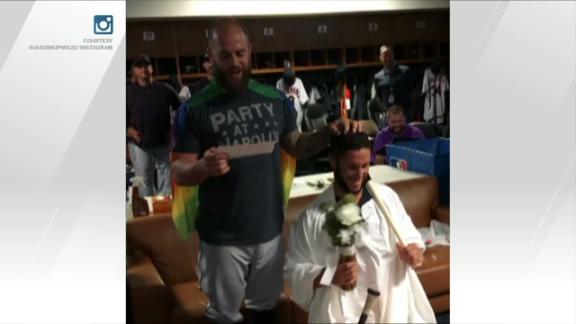 With catcher Yan Gomes mired in a season-long slump, the Cleveland Indians went to extra lengths Saturday to help their veteran catcher.

And they took a page from the movie "Major League" to do it.

The Indians held what second baseman Jason Kipnis described as a "sacrificial ceremony" for Gomes in their clubhouse before their game against the Minnesota Twinsin Minneapolis.

It included a chicken offering to the baseball gods and "Jobu."

A blessing, with veteran Mike Napoli asking Jobu to "absolve Yan Gomes of any wrongdoings he may have committed to thee."

And it concluded with Yomes slicing a store-bought chicken in half with a knife.

Kipnis told reporters that Friday night's game, in which Gomes went 0-for-4, was the "line in the sand" for the catcher's struggles.

"We bought a chicken from (Target)," Kipnis told reporters, according to MLB.com. "We bought a little blade and we had him chop it in half. We sacrificed a chicken to the baseball gods and Jobu. We gave them gifts and peace offerings. Hopefully, they'll accept them and turn the tide on our catcher."

Cleveland will have to wait and see if it worked; Gomes was not in the lineup for Saturday night's game.