Iowa walks off court without shaking hands with North Dakota 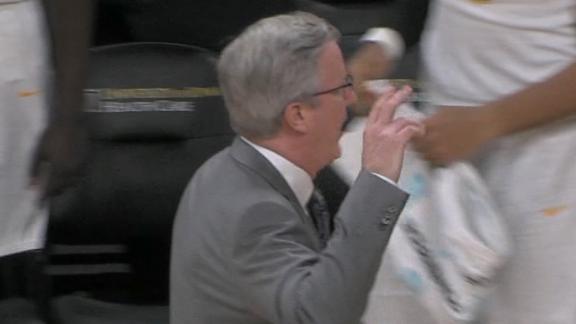 The tipping point was the game's final sequence with Iowa leading by the final margin. UND senior guard Corey Baldwin turned the ball over attempting a pass with five seconds remaining. Iowa'sNicholas Baerheld the ball and appeared content to stand and run the rest of the clock out, as players from both teams headed toward their respective benches.

Baldwin stripped the ball from Baer with three seconds left and passed to Drick Bernstine for a layup. The basket didn't count, but the damage was done as McCaffery turned and headed to the locker room, waving his players along as he walked away.

"I wasn't pleased with how the game ended and the things that happened," McCaffery told reporters after the game. "I'll say this, I have a lot of respect for [North Dakota head coach] Brian [Jones] and [assistant] Jeff Horner. I don't think they teach that stuff. But I was not having it. That's not the way to play."

It was supposed to be a joyful homecoming for Jones, who was an assistant at Iowa from 2001 to 2006, and Horner, a Mason City, Iowa, native who played for the Hawkeyes from 2002 to 2006 and is still the program leader in assists.

McCaffery hinted he was not pleased with several rough plays late in the game that Iowa led for all but 41 seconds and by as many as 19 points. But it was still physical down the stretch, culminating with Iowa's Jordan Bohannon being given a dead-ball technical with 37 seconds left.

"I told my players I was proud of them," McCaffery said. "You can't get caught up in that. The game was over. We don't needPete [Jok]getting knocked to the floor. We don't need guys getting up in Jordan's face, Nicholas Baer's head getting chopped off. We don't need it. Game's over. Move on."

McCaffery told ESPN's Jeff Goodman on Wednesday morning that he regretted what happened after the game and that he texted an apology to Jones afterward.

"I feel bad about it. I have a lot of respect for Brian Jones," McCaffery told ESPN. "I wish it didn't happen. I wish I shook hands.

"It was a hard-fought game, and I was being protective of my players. Peter Jok has been getting beat up, and it was just a few plays in the last minute that I was frustrated about. But again, I think Brian Jones is a high-character guy and a heck of a coach. Assistant Jeff Horner is one of the best players ever to play here. I shouldn't have done it. I feel terrible about what happened."

After the game, McCaffery said he was leery of a potential confrontation in the handshake line. Horner had words with some Iowa players and assistant Kirk Speraw, according to The Cedar Rapids Gazette, in what remained of the line.

"I worked here for eight years, that's why I was frustrated -- Coach Horner played here," Jones said in his postgame remarks to reporters. "We want to come here and play well. We want our family and friends to be proud of what we're doing and be respected. I get the heat of it. It's just the heat of the moment. Coach [McCaffery] is a high-character guy. I'm not blaming that. There were some things down the stretch that both teams could have cleaned up. We have to learn from those situations."

As for Baldwin's final play, Jones said he would address that as well.