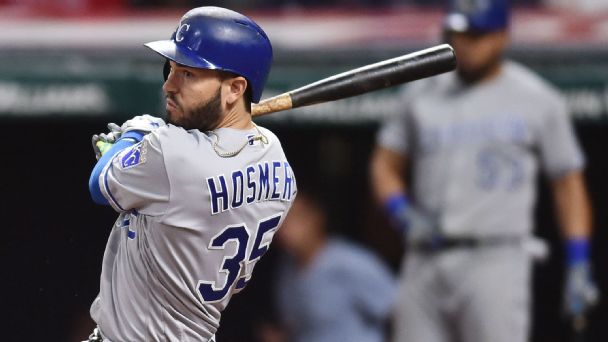 Early in the 2017 season, Eric Hosmer questions were popular whenever the topic of the current free-agent class came up. Where would he go? For how long and for how much? The answers tended to be all over the place.

At the time, there was a wide disconnect between what the mainstream sectors of the baseball industry thought Hosmer would get, and what metrics-slanted analysis thought he was worth. Then Hosmer spent most of the rest of the season producing at a higher level than he ever had before and finished with career bests in all of his slash stats: .318/.385/.498. As a result, when Hosmer entered the offseason, it seemed the mainstream perceptions of his value would prove to be more reflective of his market worth than his sabermetric portrait.

That may still be the case, but in baseball's game of high-stakes musical chairs, Hosmer is fast running out of places to plant his derriere.

At MLB's winter meetings last week in Orlando, Hosmer's agent, Scott Boras, waxed poetic about Hosmer's "premium value," which he abbreviated to "P.V." as if it were an objectively-based metric. Boras was referring to Hosmer's value-added qualities such as clubhouse leadership and proven ability to produce in high-stakes moments, such as he did while helping the Kansas City Royals to consecutive AL pennants. Those are valuable qualities and Hosmer has them, but in an age of analytics, it's tough to market a player on that basis.

Besides, as it turns out, the few teams with first-base holes have been filling their needs with lower-value commitments in terms of both money and contract length. The list:

The Red Sox were long thought to be a good match for Hosmer, though he would not have necessarily filled Boston's need for a bona fide slugger. In Moreland, the Red Sox should get a reasonable portion of Hosmer's production at a fraction of the cost, leaving them to pursue power from another position.

The Phillies' acquisition of Santana was a bit of a shocker, but if Rhys Hoskins can hold up defensively in the outfield, it may prove to be a worthy gamble. In theory, that signing should have helped Hosmer's situation. Santana was the other top first baseman on the free-agent market, and Philadelphia wasn't a likely landing spot for Hosmer anyway.

So where does that leave Hosmer? Well, it should be emphasized first and foremost that he remains the top available first baseman on the market, and with Santana signed, it's not particularly close. However, his situation nonetheless is clouded by the presence of other quality options, all of whom will sign for far less money and years than Boras is reportedly seeking for Hosmer (reportedly seven years and up to $200 million). Those players include Lucas Duda and Logan Morrison, with some buy-low candidates out there as well in Adrian Gonzalez, Pedro Alvarez and Danny Valencia.

Hosmer is coming off his age-27 season. Steamer has him projected for 2.6 WAR in 2018, though he's coming off a career-best mark of 4.1. If teams believe he's somewhere between those figures, that's a good player who should hold that value over the first three or four years of his next contract, especially given his athleticism and record of durability. He'll likely hit his decline phase during the contract, if Boras gets the contract length he's supposedly seeking, but Hosmer should remain better than replacement on even a long deal of six or seven years.

The question for every team looking to upgrade at first base: Would Hosmer provide enough marginal value over the lower-cost players to justify making such a huge commitment to fill what is generally the easiest position on the field to fill? With so few open slots, and Hosmer being locked into first base, it's a tough time for him to be seeking a life-altering deal.

With a cursory scan of the first-base situations for all 30 teams as they stand today, you can safely cross off 23 teams out of hand. Sure, some team that we just dismissed may see it differently -- certainly few thought of the Phillies as a likely destination for Santana and that's where he ended up. Still, chances are Hosmer is dealing with a pool of seven suitors. And four of those can quickly be written off as well:

Angels: The money doesn't work here, but Hosmer would be an upgrade at a 1B/DH mix that includes Albert Pujols, C.J. Cron and Luis Valbuena. But, let's face it, the Angels are going to keep playing Pujols even if his feet turn into literal cement blocks instead of just figurative ones.

Mariners: The M's looked like they were going to be one of the more aggressive teams of the offseason, but after missing out on Shohei Ohtani, Seattle has taken a more measured approach. They acquired Healy as a low-cost power source early in the offseason, and he's got several years of team control remaining. Seattle will also likely carry a Rule 5 first baseman in young Mike Ford. The Mariners seem to be sensibly focusing their resources on stabilizing their pitching staff.

Mets: Hosmer would be a splashy signing for a team that could make a run with good rotation health. However, the Mets have a long-term first-base prospect in Dominic Smith, and even if they don't want to hand the position over to him right now, one of the low-cost options would make more sense to stop the gap. Earlier this week, there were reports that New York was eyeing Gonzalez.

Rockies: Colorado is a sneaky-good fit for Hosmer, whose presence would allow the Rox to use Ian Desmond in a jack-of-all-trades role. However, Colorado has a high-level infield prospect in Ryan McMahon, not to mention a need to spend on a closer. As with the Mets, someone of the Duda/Morrison class makes more sense on a shorter deal, as would last year's first baseman, Mark Reynolds.

That leaves us with three possibilities for Hosmer. And to be frank: None of those three are slam dunk fits, either:

Brewers: The Brewers got tremendous bang-for-the-buck production in 2017 from their first-base duo of Eric Thames and Jesus Aguilar, and right now they are slated to bring back that tandem in 2018. Milwaukee has been rumored to be in the market for a free-agent splash, but most typically in relation to starting pitchers. The Brewers also need to fill out their setup staff in the bullpen now that Anthony Swarzak has signed on with the Mets.

Nevertheless, Hosmer is a sleeper fit in Milwaukee. He would stabilize a position for years to come on a team that should continually transition players to the majors over the next years, even as a solid current roster continues to compete. Hosmer's ability to hit situationally would be a godsend to a Brewers offense that is heavy on power -- but also on strikeouts.

Still, if the Brewers spend big on someone, it'll probably be a pitcher.

Padres: The Padres seem to be in the process of upgrading their big league roster even though their highest-ceiling prospects in a deep minor league system are a few years away. Because of that, Hosmer is not an obvious fit. In lieu of investments elsewhere, especially in starting pitching, San Diego would likely remain a second-division team during Hosmer's best remaining seasons. On top of that, San Diego has already made a pricey long-term commitment to incumbent first baseman Wil Myers, though he's a good-enough athlete to play on an outfield corner for a couple of years.

San Diego keeps coming up in the rumor mill as a contender for Hosmer, and, to be sure, they are Hosmer-curious. If San Diego sees Hosmer as a cornerstone piece, along with Myers, around whom they can construct a competitive lineup that will gradually be upgraded by prospects transitioning to the majors, then the Padres make as much sense as anyone.

But the question remains: Is the apparent lack of synchronization between Hosmer's remaining peak and San Diego's competitive timeline too much to justify such a large expenditure?

Royals: We end up where Hosmer started: in Kansas City. The Royals are embarking on a rebuild, though to call it a "wholesale" rebuild would be to overlook the ongoing presence of productive veterans like Salvador Perez, Danny Duffy, Kelvin Herrera and Whit Merrifield.

As Hosmer's situation lingers, along with that of teammates Mike Moustakas and Lorenzo Cain, it complicates the rebuilding plan in one sense. That is, if any of that trio ends up dangling long enough that a short-term deal becomes the only course of action, then the draft pick compensation that Kansas City is counting on could take a hit.

The magic contract value is $50 million: If Hosmer, Moustakas and Cain all land deals of at least that total value, then KC could end up with three first-round compensatory picks. But if those players end up on short-term deals, then the quality of the draft compensation dwindles.

Would that be enough reason for the Royals to pay an extra premium in their effort to retain Hosmer, as they've been anxious to do all winter? In a marketplace that, for Hosmer, currently has little clarity, that might make as much sense as anything.
Report a correction or typo
Related topics:
sportsespnroyalsmlberic hosmerkansas city royalscolorado rockiesnew york metsmilwaukee brewerslos angeles angelshot stovewinter meetingsfree agentsan diego padres
Copyright © 2022 ESPN Internet Ventures. All rights reserved.
TOP STORIES
19 children, 2 adults killed by gunman in TX school shooting
Uvalde school shooting: What we know about 19 kids, teacher killed
Jersey City police fatally shoot man after report of shots fired
Fleet Week New York returns to the Big Apple
AccuWeather: Sun and clouds with a cool breeze
'People are getting numb': Texas mom reacts to mass shoot at school
A look at some of the deadliest US school shootings
Show More
Biden to sign policing order on anniversary of Floyd's death
Biden addresses nation on 'horrific' Texas school shooting
Alleged shooter in unprovoked subway murder surrenders
DA: Gang members taunted rivals in rap videos, beat bird to death
Senator begs for gun compromise after Texas school shooting: VIDEO
More TOP STORIES News