Islanders GM: John Tavares 'has earned every right' to listen to pitches from other teams 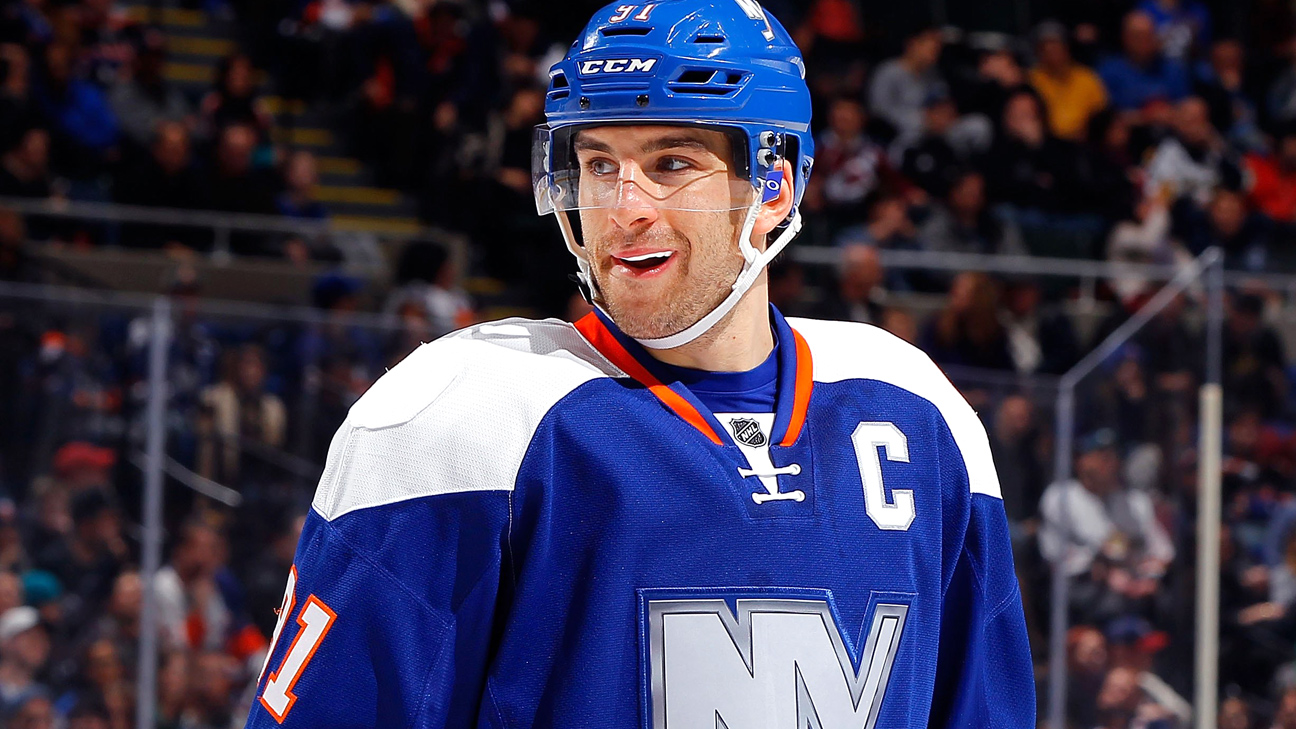 DALLAS -- New York Islanders general manager Lou Lamoriello said he's not discouraged that star center John Tavares will listen to pitches from other NHL teams ahead of unrestricted free agency, rather than re-signing with the team before the process plays out.

"I have no disappointment. No discouragement," Lamoriello said after Day 2 of the NHL draft in Dallas. "He's earned every right to make whatever choice he has. The most important thing is that we hope in the end that he's an Islander,"

Pat Brisson, the agent for Tavares and the co-head of CAA Hockey, announced on Saturday that his client would listen to pitches from at least five teams during the lead-up to July 1, when Tavares is free to sign anywhere. The field is expected to include the San Jose Sharks, who have over $20 million in cap space after trading forward Mikkel Boedker and buying out defenseman Paul Martin; the Toronto Maple Leafs, Tavares' hometown team; the Tampa Bay Lightning, home to Tavares' close friend Steven Stamkos; the Vegas Golden Knights, who have over $30 million in cap space; and a surprise entrant, the Dallas Stars.

Vegas GM George McPhee said his team would add a significant free agent if it made sense: "There's no urgency for us to do anything. We like the team we have, we like the model we have. If we can make it better by doing something that makes sense, then we'll do it."

Sharks GM Doug Wilson added: "The interview process obviously doesn't open up until tomorrow. And when that comes, we'll be prepared and see what opportunities and what conversations we'll be able to participate in."

The pitches are expected to take place at the CAA offices in Los Angeles. Would Lamoriello head out there to pitch the Islanders?

If he hits the market, Tavares would be one of the most coveted free agents in NHL history. He's 27 years old and a franchise center, with 621 points in 669 games, all with the Islanders. That includes 272 goals, as Tavares scored 37 last season. He's a two-time Hart Trophy finalist for league MVP.

Was Lamoriello surprised that Tavares, who has expressed a desire to remain with the Islanders, is listening to other teams?

"I don't look at it like it's a surprise," he said. "I respect him. He has a right to do that. The important thing is that he's an Islander at the end."

It's a process that Lamoriello saw while with the Maple Leafs in 2016 as the team courted Stamkos, a franchise player who like Tavares listened to pitches before deciding to remain with the Lightning.

Lamoriello was hired by the Islanders after the season to help entice Tavares to stay and as a stabilizing force in management for a struggling franchise. That enticement also now includes coach Barry Trotz, whom the Islanders hired after Trotz and the Washington Capitals parted ways over his contract terms after their Stanley Cup championship.

Have the Islanders done enough to keep him?

"That's a question you need to ask him,"Lamoriello said. "There's been a commitment from ownership. They want us to be the best team in the NHL, and they gave me the authority to do that. The first decision was to get a coach, and in my opinion, we got one of the best ones in the NHL. Now we have to convince our player that this the best decision for him."
Report a correction or typo
Related topics:
sportsespnlou lamoriellotoronto maple leavesnhljohn tavarestampa bay lightningdallas starssan jose sharksvegas golden knightsnew york islanders
Copyright © 2022 ESPN Internet Ventures. All rights reserved.
TOP STORIES
Police shoot driver after vehicle strikes officer in Brooklyn
AccuWeather Alert: Spotty storms
Bethpage Air Show cancels remainder of Saturday lineup due to weather
NYC beaches officially open to swimmers this Memorial Day weekend
Police inaction moves to center of Uvalde shooting probe
Texas gunman threatened rapes, shootings on Yubo app, users say
VP Harris expected at last Buffalo shooting victim's funeral
Show More
Woman gets 15 months in prison for punching flight attendant
Jersey Shore, businesses prep for busy Memorial Day weekend
Texas survivor apologized to dad for blood on clothes, losing glasses
Massacre survivor says gunman told them: 'You're all gonna die'
16-year-old arrested after social media threat to shoot up NY school
More TOP STORIES News