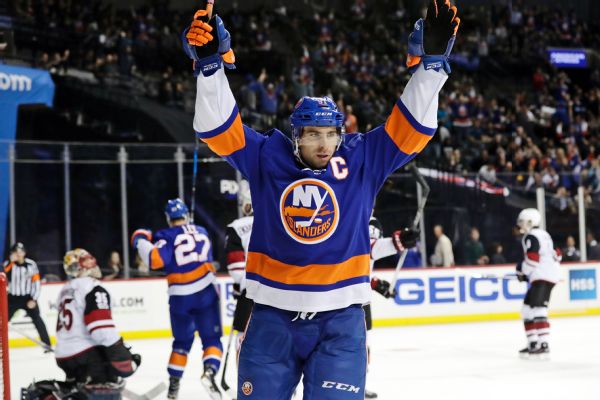 ELMONT, N.Y. -- It's hardly the Dodgers going to Los Angeles, but another major sports franchise is leaving Brooklyn.

The New York Islanders, who moved from their suburban home to Brooklyn in 2015, have won a $1 billion development bid to build a new 18,000-seat arena, hotel and other amenities on the grounds of Belmont Park, east of New York City.

Some details about the project remain unclear, including when the team will begin playing in the new arena, and whether it will have to find a temporary home after it leaves Brooklyn's Barclays Center after the 2018-19 NHL season.

Team owner Jon Ledecky was confident those issues would be resolved; he, fans and elected officials focused primarily on what they saw as a positive turning point for the team that won four straight championships in the 1980s but has failed to match that success in ensuing decades.

"We're just beyond happy," said Claire Harding, president of the Islanders booster club following an announcement at the track that plays host to horse racing's Triple Crown each June. "It will be great. It's a great location and we'll have our own building."

She and others said the team's move to Brooklyn's Barclays Center just didn't work out. That arena was designed for the NBA's Nets and required hockey fans who live on Long Island to commute an hour or more each way to Brooklyn to see games.

"The Islanders are back where they belong," Gov. Andrew Cuomo said from a stage that included Ledecky, NHL Commissioner Gary Bettman, players John Tavares and Cal Clutterbuck, and for good measure, Long Island native Billy Joel. The Rock n' Roll Hall-of-Famer did not speak at the event, but was lobbied by several speakers to consider playing the first concert at the new arena.

The National Hockey League team beat out a bid from the New York City FC soccer team, which envisioned building a stadium on the site. NYCFC said it was happy to be a finalist and will continue to look for a site for a new soccer-specific stadium.

The Islanders played at the Nassau Coliseum from its inception in 1972 until 2015, winning the Stanley Cup every year from 1980 to 1983. Since the move, the team has failed to gain traction with fans in Brooklyn and is last in average attendance this year in the league.

The Islanders submitted a development bid for a portion of the Belmont complex in September with several partners, including owners of the New York Mets and Madison Square Garden.

"This will be more than an arena," Ledecky said. "This site will be the home of economic development." He said the project will be completely financed privately.

After the Islanders leave Brooklyn, the team may be able to temporarily return to the Nassau Coliseum while the new facility is being built, Cuomo has suggested. Bettman reiterated Wednesday that a full-time return was never an option.

The coliseum, about 15 miles (24 kilometers) east of Belmont, reopened last year following a $165 million renovation. It currently has no major sports teams playing there regularly and fills its calendar with concerts and other events.

Belmont Park, which opened in 1905, attracts crowds approaching 100,000 or more when it plays host to the Belmont Stakes, but sees far fewer attendees on most days during the racing season. The new arena will be situated in one of the track's parking lots, not far from a Long Island Rail Road station.