It's MLB draft day! Here's what you need to know 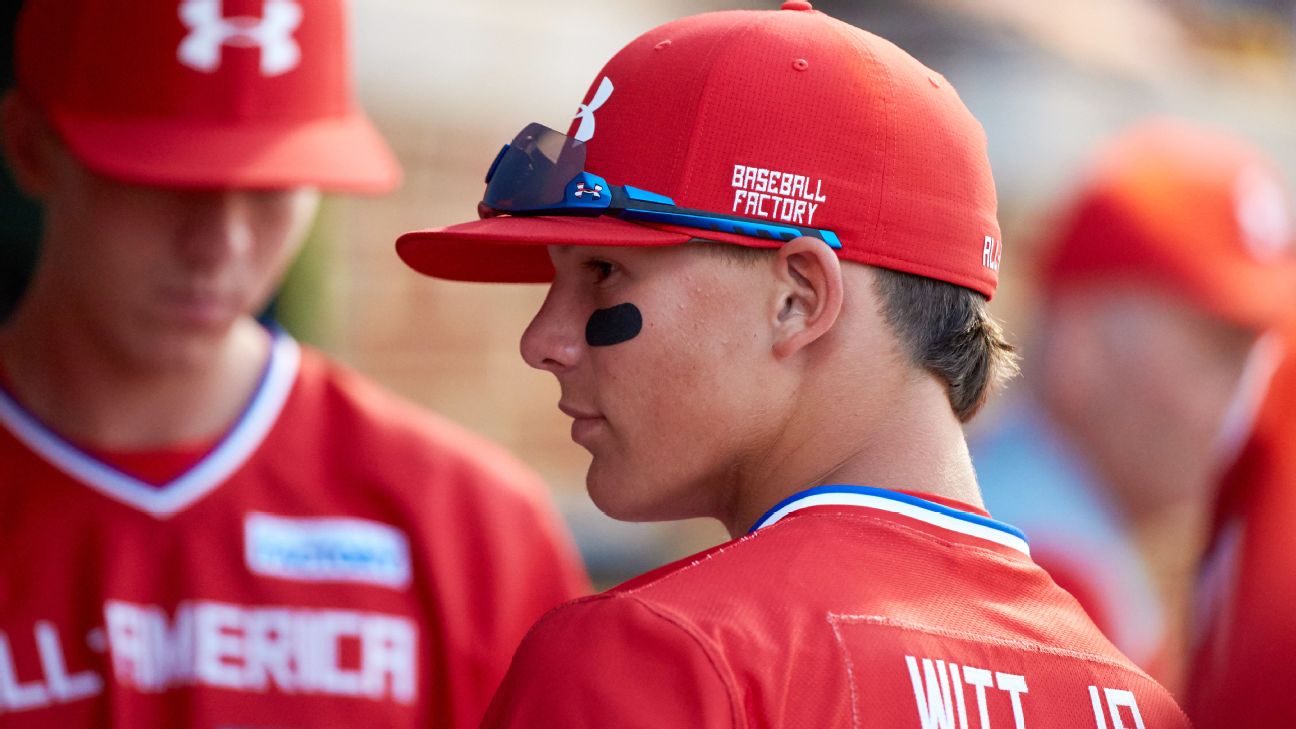 Somewhere out there is the next great star. Maybe it will be the first player taken in the MLB draft or another first-round pick. Maybe it will be somebody buried deeper in the draft, like second-rounder Nolan Arenado or fourth-rounder Cody Bellinger. It could be a college player or a 17-year-old kid. It's part scouting expertise and part luck.

Here are some questions and issues heading into Monday's first round, the first of three days of drafting:

Will the Orioles draft Oregon State catcher Adley Rutschman No. 1?

Some have called Rutschman the best top overall prospect since Bryce Harper in 2010. He's a switch-hitting catcher with defensive skills, power potential and huge numbers with the Beavers: .427/.584/.772 with 16 home runs in 171 at-bats and nearly twice as many walks as strikeouts. The stat line backs up the scouting reports that he's an elite-level talent, and as Keith Law wrote on his big board of the top 100 prospects, Rutschman's floor is that he'll be a longtime big league catcher because of his defense, and the ceiling is an All-Star catcher because of his power.

If the Orioles take him first, Rutschman will be the fifth catcher taken first overall:

Goodwin is a great trivia question, the only player to be drafted first overall twice (he ended up playing just 252 games in the majors, none of them at catcher). Chilcott and Ivie were high school catchers. Chilcott, famously drafted one spot ahead of Reggie Jackson, never made the majors, and Ivie had to move to first base. Mauer has the second-most career WAR of any catcher drafted in the first round, behind only that of Craig Biggio, who moved to second base after four seasons behind the plate with the Astros.

The Giants took Georgia Tech backstop Joey Bart second overall last year, the first catcher selected that high since Mauer. In comparing Rutschman with Bart, the obvious difference is control of the strike zone during their junior seasons:

Even factoring in that the ACC might be a tougher league than the Pac-12, that's a big edge for Rutschman. Bart struck out a lot for an elite college hitter -- similar to Mike Zunino, the third overall pick in 2012, who has struggled to hit for average in the majors -- adding some risk to his profile. I see no such risk with Rutschman.

So why wouldn't the Orioles draft him? They could draft Cal first baseman Andrew Vaughn or high school shortstop Bobby Witt Jr. to save money in their bonus pool allotment that they could then use later in the draft to give an over-slot bonus to a high school player.

Will Witt go second overall to the Royals?

In a year in which Fernando Tatis Jr., Vladimir Guerrero Jr. and Cavan Biggio have made their big league debuts, it's fitting that one of the top prospects is the son of a former major leaguer. Bobby Witt Sr. won 142 games in a 16-year career and was the third overall pick in 1985, so if Witt Jr. goes this high, it would make them the highest-drafted father-son duo, surpassing Tom Grieve (the sixth pick in 1966) and Ben Grieve (second in 1994).

Two of the most famous No. 1 overall picks were 17 on draft day: Ken Griffey Jr. and Alex Rodriguez. Carlos Correa was 17 when the Astros drafted him first overall in 2012. Mike Trout didn't turn 18 until August of his draft year. Rany presented a list of examples, concluding that "young draft picks are a MASSIVE market inefficiency."

This doesn't mean that Witt and Baty aren't worthwhile first-round picks or that Witt doesn't deserve to go second overall. It's just another data point that teams will throw into their evaluations, and their statistical models won't like that these players are older.

In the other direction, shortstops Gunnar Henderson (No. 41 on Keith's board) and Kyren Paris (No. 49) are two players who could outperform their draft slots, as they don't turn 18 until later in the year.

When will the first pitcher go?

Keith Law has said this is the weakest draft class in his 18 years of scouting the draft for the Blue Jays and ESPN, and is especially weak in college pitching.

Keith's top eight players are position players, and he projects the first pitcher to go to the Reds at No. 7. The mock drafts at MLB.com, The Athletic and FanGraphs predict the same scenario (Keith, The Athletic and MLB.com have the Reds going with TCU lefty Nick Lodolo, while FanGraphs predicts West Virginia righty Alek Manoah). If the first six picks end up being position players, it would be a draft first. The first five picks in 2005 were all hitters: Justin Upton, Alex Gordon, Jeff Clement, Ryan Zimmerman and Ryan Braun. (That was a legendary first round that also included Troy Tulowitzki, Andrew McCutchen, Jay Bruce and Jacoby Ellsbury.)

This is one of the longest-standing draft debates. Eno Sarris recently reported at The Athletic that the average age of first-round pitchers has dropped in recent seasons. Indeed, when I checked the number of high school and four-year college players selected in the first 30 picks, the trend is away from college pitchers (though the trend is toward a few more position players in the first round, not necessarily toward high school pitchers):

Those numbers don't answer the question, however, of whether high school or college pitchers are the better bet. I recently wrote an article asking "Where do the best starting pitchers come from?" I created a list of the 75 best starters, 60 of which came via the draft. The breakdown:

That would seem to point to favoring college pitchers, but of the 35 first-round picks out of those 60 pitchers, 18 were college guys, and 17 were high school players. It doesn't seem like there is any obvious trend here or reason to focus on one group.

Who is the most interesting pitcher in the draft? Elon right-hander George Kirby is fascinating because of his 107-to-6 strikeout-to-walk ratio, and Keith Law has him No. 24 on his board, and two of the mock drafts have Kirby going at No. 14 to the Phillies. He has size (6-foot-4) and hits 95 mph, but Keith writes that he wouldn't be a first-rounder in a typical year. He's also from a small college -- Elon plays in the Colonial Athletic Association -- and you don't see many first-round pitchers from non-power conferences. (The Mariners took Stetson righty Logan Gilbert last year, hoping he follows in the path of late-round picks Jacob deGrom and Corey Kluber.)

Who is the most interesting hitter in the draft?

Vanderbilt outfielder JJ Bleday had six home runs his first season but broke out with 25 home runs this year and will be one of those hitters to go in the top six. His 45-to-45 strikeout-to-walk ratio is good, but it pales in comparison to that of Rutschman, and elite college hitters usually have more walks than K's, so Bleday might have swing-and-miss issues as a pro.

Arizona State outfielder Hunter Bishop, a potential top-10 pick, is the younger brother of Mariners outfielder Braden Bishop and broke out with 22 home runs. He has some swing-and-miss concerns as well, however, with a 22 percent strikeout rate.

Baylor catcher Shea Langeliers is a first-rounder based on his stud defense and leadership, and while there are questions about his bat, he suffered a broken hamate bone early in the season (returning after missing just three weeks), and on Saturday, he had a record-setting three-homer, 11-RBI game in the NCAA tournament.

Which team has the most to gain from this draft?

Obviously, the teams at the top of the draft have to hit their picks -- young, good players are more important than ever, and if you're going to tank, you better take advantage -- but this could be an important day for the future of the Diamondbacks. The Diamondbacks don't pick until 16th, but after losing Patrick Corbin and A.J. Pollock as free agents, they have the most bonus pool money and also pick 26th, 33rd, 34th, 56th, 74th and 75th -- that's seven of the first 75 picks. This is somewhat reminiscent of 2011, when the Rays had 10 of the first 60 picks. The Rays almost flubbed that entirely, though they did end up with Blake Snell. The Diamondbacks hope to find their own Snell -- and two or three other future major leaguers. 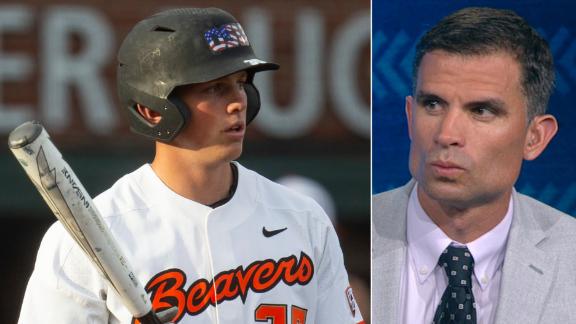 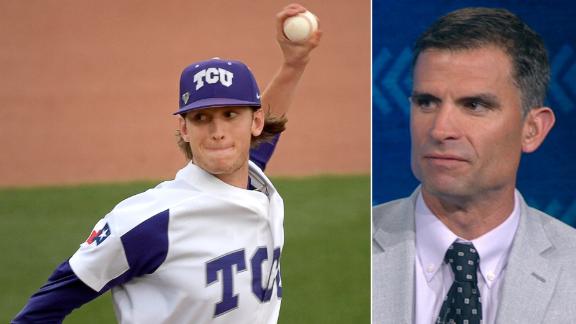 Is Lodolo an MLB starter or reliever?
Chris Burke likens Nick Lodolo to Andrew Miller and questions whether he will be a major league starter or be in the bullpen. 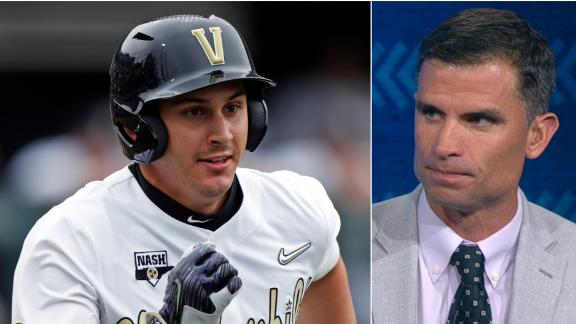 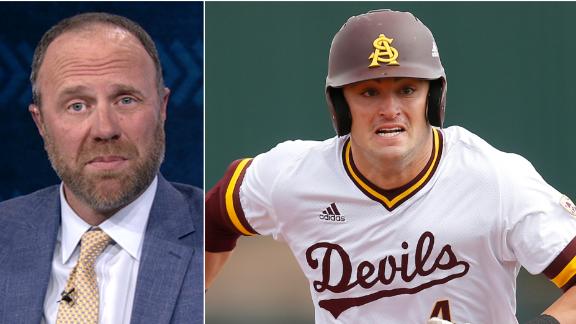