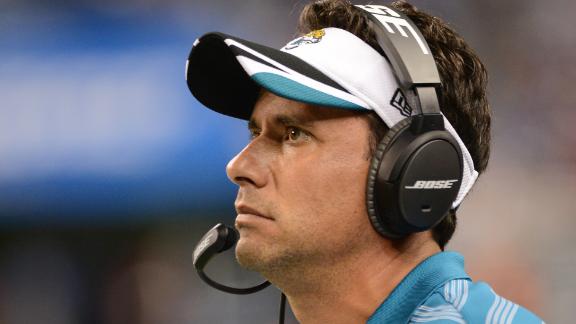 JACKSONVILLE, Fla. -- The Jaguars have fired offensive coordinator Jedd Fisch because of what coach Gus Bradley said were philosophical differences related to how much the team asked of quarterback Blake Bortles, which came as a surprise to the rookie.

Bradley felt Fisch was overloading Bortles with too much of the offense at once and would have instead preferred an approach in which Bortles was given measured doses and had the package expanded only as he grew comfortable with the offense.

"There is a lot of truth now to philosophical differences as far as we want to put on Blake's plate to do a lot," Bradley said. "Let's throw a lot at him and then let's see how much he'll be able to carry that over to next year. Or, no, let's not put a lot on his plate and let him grow through this. Which way is best? I don't know. I know the way we kind of want to do it.

"I just think we want to help him get better every day and not overwhelmed. I think you know my philosophy enough of be careful of how much you put on a guy to create a lot of anxiety that might keep him from being his best."

Bortles was caught off guard by the firing, telling the Florida Times-Union on Tuesday night that he had an "awesome" relationship with Fisch.

"I took the mindset [Monday] that Jedd was going to be my offensive coordinator next year," Bortles told the Times-Union. "I told Jedd from day one that I wanted him to coach me hard, and that was what I was accustomed to from playing for George O'Leary at UCF.

"Jedd treated me very fairly and, when we did have disagreements, we were able to talk through them, work things out and get a solution or compromise."

The Jaguars averaged 15.6 points per game in 2014 and ranked 31st in the NFL in passing and 21st in rushing with a rookie quarterback, three rookie receivers and two rookie offensive linemen as starters.

The Jaguars didn't finish with more than 288 yards in any of their final six games.

The team finished 31st in total offense, 31st in rushing and 22nd in passing in 2013 with veteran quarterbacks Chad Henne and Blaine Gabbert.

The Jaguars scored more than 20 points just four times and never scored more than 25 points this season. They scored just two offensive touchdowns in the team's first four games after the bye week and only five in the final six games.

Bortles started 14 games and threw for a team single-season rookie-record 2,908 yards and 11 touchdowns. He also threw 17 interceptions but threw just three in the final six games.

The quarterback told the Times-Union that he "definitely" hopes the Jaguars retain quarterbacks coach Frank Scelfo.

"I love Frank, and I thought me, Frank, Jedd, Chad and Stephen [Morris, a Jaguars backup quarterback] all had a great relationship," Bortles told the Times-Union. "I hope Frank gets to stay and I get to continue working with him."

Bradley hired Fisch in 2013 away from the University of Miami, where he spent two seasons as the Hurricanes' offensive coordinator and quarterbacks coach.