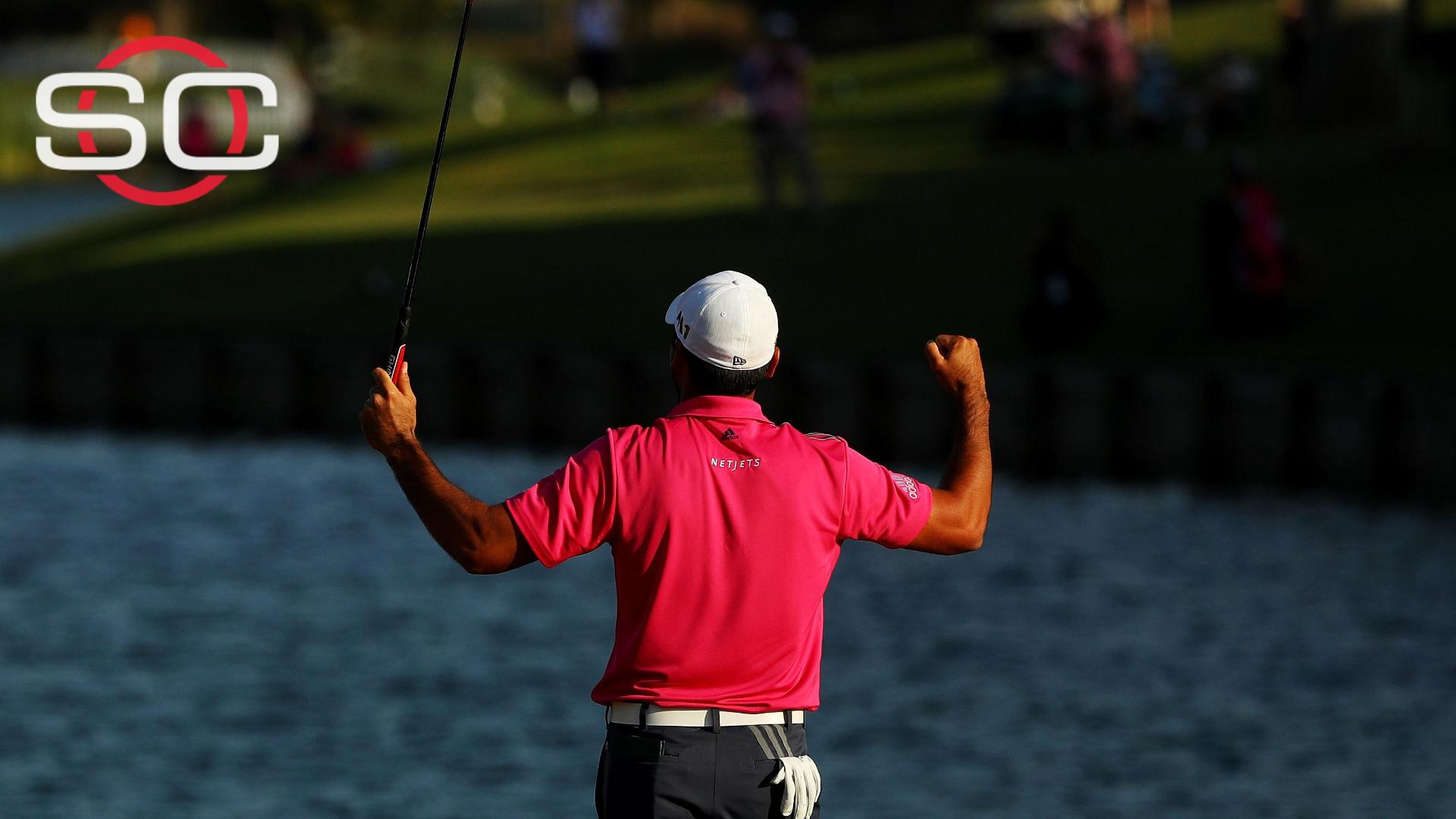 PONTE VEDRA BEACH, Fla. -- Jason Day wanted to win The Players Championship so badly that he wasn't going to let anything stop him.

Not the super-slick greens that nearly derailed him Saturday. Not the three muffed chips that turned potential birdie into an unsettling bogey as he made the turn Sunday. Certainly not the best field in golf.

With another commanding performance, Day put his stamp on No. 1 in the world by never letting anyone closer than two shots in the final round, playing bogey-free on the back nine of the TPC Sawgrass for the fourth straight day and closing with a 1-under 71 for a wire-to-wire victory.

It was his seventh title in the past 10 months. The 28-year-old Australian wants to win a lot more.

"I want to be able to be looked back on and know that 'He was one of the greats in the game.' If I have the opportunity to do that, I'm going to try my best," Day said after his 4-shot victory. "And I have the opportunity to do that right now, try and work as hard as I can to really leave my footprint in this game. I'm very motivated to win as much as I can right now."

He stomped his way all over everyone at The Players Championship, even though he had a few nervous moments. Day made bogey on No. 6, had to make a 15-foot par putt on the next hole and really looked out-of-sorts from just 40 feet right of the green on the par-5 ninth. He muffed three straight chips and had to make a 6-foot putt just to escape with bogey, which dropped his lead to two shots.

"If I walk away with a double-bogey there, I let everyone [back] in the field," he said. "I was right there next to the green in two and felt like an amateur chopping my way to the pin. That putt was probably the most crucial putt of this tournament for me."

Two 15-foot birdies over the next three holes restored his margin and sent him on his way. The last hurdle was finding land on the island-green 17th, and he cleared the water with about 10 feet to spare.

Day's seven victories dating to the Canadian Open include the PGA Championship, The Players, a World Golf Championship and a pair of FedEx Cup events, all some of the strongest fields in golf. Day became the first wire-to-wire winner in 16 years at Sawgrass, and he joined Tiger Woods, Johnny Miller and Tom Watson as the only players to go wire-to-wire twice in the same season, dating to 1970.

Kevin Chappell, who finished one shot behind Day at Bay Hill, was 5 under over his final 10 holes for a 69. He picked up a consolation check of $1,134,000 and moves just outside the top 30 in the world, which gives him a spot in the next two majors.

"That's getting a little old," Chappell said of his two runner-up finishes to Day. "I'm not sure what Jason's scrambling stats were, but they were much better than mine on the week."

Day got up-and-down 85 percent of the time this week, the best at Sawgrass. He now has won 10 times on the PGA Tour. Only Rory McIlroy,with 11, has won more among players in their 20s.

"It's no coincidence he's No. 1 in the world," Justin Thomas said after closing with a Sunday-best 65 to tie for third. "He drives it extremely far, extremely straight. He hits it to the moon, so he can access pins that most people can't. His short game is ridiculous. I think I've pretty much covered it all there when it comes to the golf."

Hideki Matsuyama, playing in the final group with Day, was 3 over after three holes and quickly out of the mix.

The pressure didn't come from anyone else. Day brought it on himself. He hit only three greens on the front nine and let evil thoughts of blowing the lead creep into his head until he steadied himself with the bogey putt on No. 9 and two birdies on the 10th and 12th holes.

In the world rankings, Day now has a large lead over Jordan Spieth, who missed the cut, and McIlroy at No. 3, who was never a factor on Sunday at Sawgrass. Dating to his 81 to miss the cut last year at The Players, Day has finished out of the top 10 only seven times in his past 20 starts.

Adam Scott referred to his run as "Tiger-esque."

"That's one of the hardest things to do: when you are hot like that, to keep pushing," Scott said. "But he has a very strong desire to achieve so much, and I think probably his goals are changing throughout this period, and he's expecting more and more of himself. He's got that ability to push himself and accomplish." 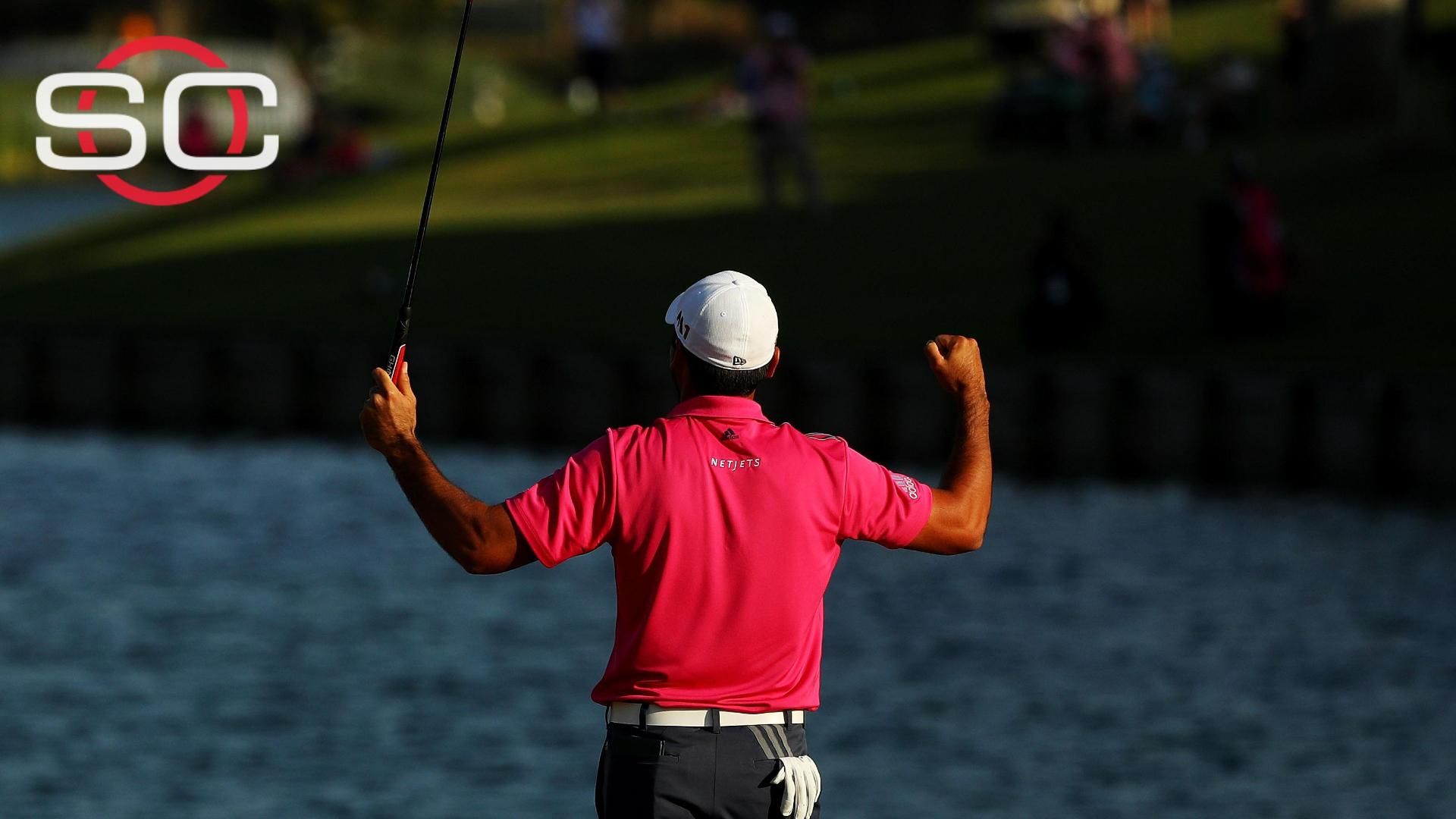