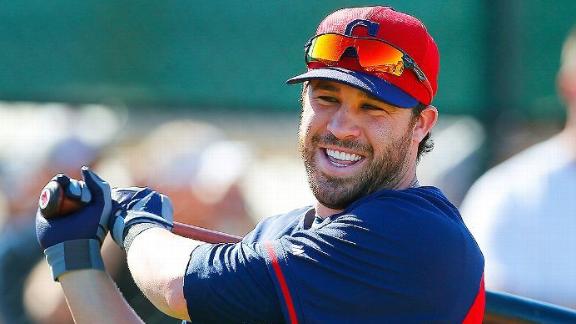 CLEVELAND -- Only hours before this season's home opener, the Indians guaranteed Jason Kipnis will be around for more than a few more.

The All-Star second baseman agreed to a $52.5 million, six-year contract Friday, binding him to the Indians through the 2019 season. The deal includes a club option for 2020.

Kipnis signed the contract a day after turning 27, giving him a birthday gift of wealth and security he'll never forget.

"It's an amazing feeling to get something done," Kipnis said. "I wanted to stay here. I'm excited about being here. "

Kipnis is the latest core player to be signed to a long-term deal by the Indians, who reached agreements with outfielder Michael Brantley (four years, $25 million) and catcher Yan Gomes (six years, $23 million) in the past two months.

"It's the ownership, the top, showing us that they believe in us, that we've got the guys who can win games now and we want them to stick around," Kipnis said. "I'm excited about being a part of that."

Kipnis previously signed a one-year deal worth $554,900 in the major leagues and $305,700 in the minors. The new deal covers this season, all three of his arbitration-eligible years and extends through at least the first two seasons after he could have become a free agent.

The Indians and Kipnis' agents had been negotiating a deal for months.

"This was our third attempt at it, so it's good to finally be able to get it done," general manager Chris Antonetti said. "It's a complicated thing. You have to figure out what the right value is, what the appropriate way is to share risk, and this was the time we were able to do it."

Kipnis developed into one of the American League's rising stars last season, batting .284 with 17 homers and 84 RBIs in 149 games. He also stole 30 bases, scored 86 runs and led the Indians in runs, hits, RBIs and steals.

Kipnis has endeared himself to the Indians, manager Terry Francona and Cleveland fans with his hustling, win-at-all-costs playing style.

That grit was on display Wednesday night in the ninth inning in Oakland, when after twice failing to move two runners over with a bunt, Kipnis beat out a fielder's choice, stole second and scored the go-ahead run as the Indians rallied for a 6-4 win in the second game of a doubleheader.

"That was Kip in a bottle," Francona said. "That's the way Kip plays. You'd see a lot of guys maybe not get the bunt down, strike out, get mad because we asked him to bunt and we lose."

After going 92-70 last season and making the playoffs for the first time since 2007, the Indians have shown a strong commitment to winning now. That hasn't always been the case in Cleveland, where fans have seen the front office trade star pitchers CC Sabathia and Cliff Lee before they could leave as free agents.

These new deals, coming a year after the Indians signed free agents Nick Swisher and Michael Bourn to multiyear contracts, are signals that the club intends to compete for a championship.

"It's so awesome," Swisher said. "This is not a one-and-done organization anymore. The moves that we're making are all the right moves."

The signings, too, have changed outside perception of the Indians, who haven't won a World Series title since 1948.

"When I was on other teams in coming to Cleveland, if you didn't sweep, it was a bad road trip," said Swisher, who previously played with the Yankees, White Sox and A's. "For us now, people are realizing that when you come in here, we're going to fight for it. I think last year's record speaks for itself, but that wasn't our goal, to go out and have one great, amazing season and then just fall off. Everything is going in the right direction."