Jay Bruce homers in return from DL; Mets to try him at first base 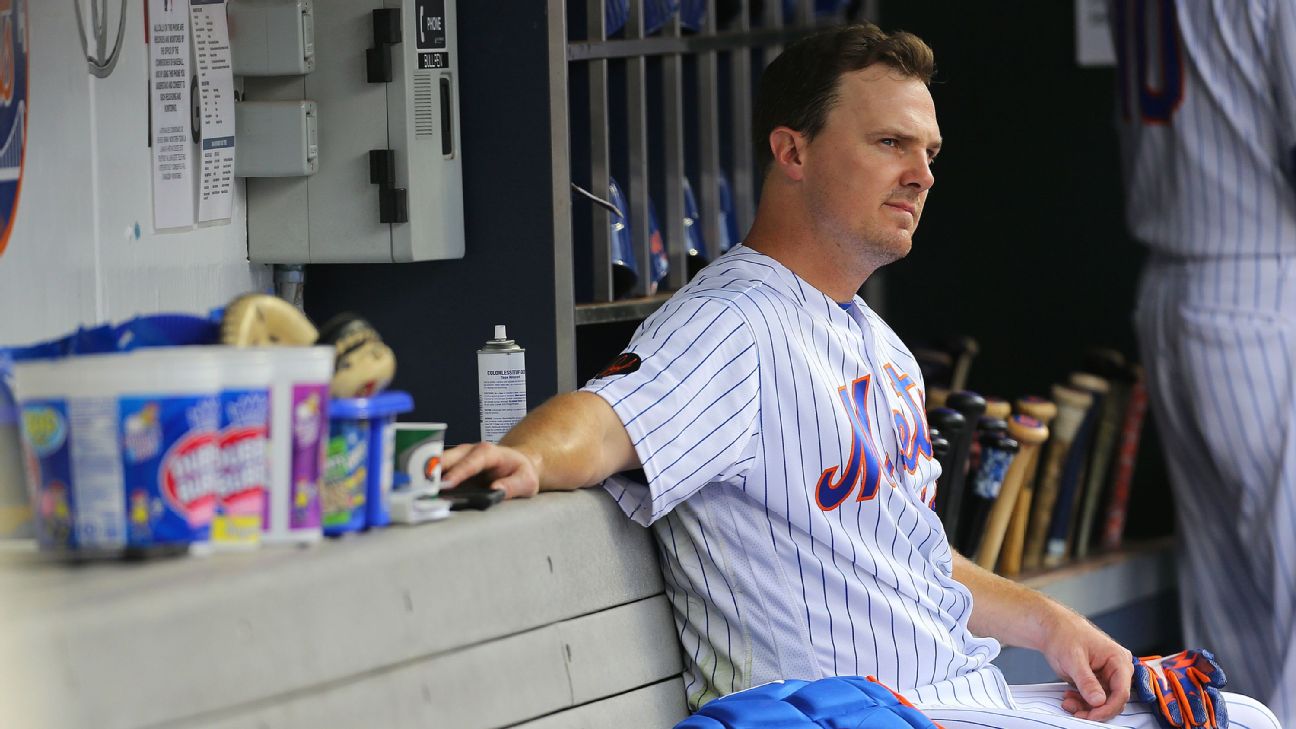 NEW YORK -- Veteran outfielderJay Bruce is back in the lineup for the New York Mets and ready to try something different.

Bruce was reinstated from the disabled list Friday after missing more than two months with an aching right hip, and the Mets plan to audition him at first base down the stretch.

A three-time All-Star, Bruce, 31, returned to the Mets as a free agent last winter and signed a $39 million, three-year contract. Also bothered by plantar fasciitis in his feet, however, he batted only .212 with three homers and 17 RBIs in 62 games before going on the DL. His paltry .613 OPS was well below his career mark of .783 in 11 major league seasons.

"Obviously, I've been injured and I've underperformed," said Bruce, who homered in his return to help the Mets beat the Washington Nationals 3-0. "Neither of those things were on my list of things to do coming back to New York. So it's not something I'm happy about or proud of, but I can only move forward.

"I have a little over a month this year and I have two more seasons to right the ship and be the player I've been pretty much my whole career. I think people know that, and I think people are going to see that."

Bruce started in right field, his regular position, during his first big league game since June 17 -- just in time for his bobblehead giveaway Saturday at Citi Field. Batting fifth, he finished 1-for-4 with a two-run homer in the eighth inning.

"One thing that I've never kind of lacked in my career, regardless of how well or how poorly I was playing, is power. And this year, it just wasn't there. So it's obviously raised red flags for me, and hopefully I'm out of the woods with that," he said.

The fourth-place Mets intend to play Bruce at first base fairly often as they attempt to determine the best fit for next year. He has made 16 career starts at first base, including 10 last season and three this year.

"I've got both gloves in my locker, and whatever they tell me I'm doing, I'll do. That's all there is to it," Bruce said. "I'm ready for whatever. ... I feel confident about it."

Michael Conforto and Brandon Nimmo, both 25, have been productive in the corner outfield spots. Each has played center field in the past, but manager Mickey Callaway said the Mets would prefer to keep them in the corners -- especially with left fielder Yoenis Cespedes' status uncertain early next season following surgery on both heels.

That could leave first base as a landing spot for Bruce, if he looks comfortable there.

"I definitely think that's a possibility," Callaway said. "I think that's one of the things we need to find out in this last part of the season."

It's not that simple, though.

Power-hitting prospect Peter Alonso, who was leading all minor leaguers with 32 homers and 109 RBIs this season, is the first baseman at the Mets' affiliate in Triple-A Las Vegas. First base is also Dominic Smith's natural position, though the touted 23-year-old has mostly been a disappointment during his major league stints the past two years.

Wilmer Flores, with experience all over the infield, has received the majority of playing time at first this season. He is batting .278 with 11 homers and 48 RBIs and is under contractual control next year.

So if Bruce shifts to first base, it could create a bit of a logjam.

Bruce did say that if the Mets decide to move him primarily to first next year, he would like a heads up ahead of time.

"I would appreciate them letting me know so that I have an offseason to prepare," he explained. "And I think they would have every intention to do that. I definitely don't doubt that. They've been pretty transparent with the whole idea so far."

Bruce wouldn't call himself 100 percent healthy necessarily, but said his hip and feet feel good. He said the injuries affected him "a lot" earlier this year and he wasn't really able to drive the ball.

"I feel like I'm moving around better, first and foremost, with my feet. That was kind of secondary when I went on the DL. But, got an opportunity to rest that, and it feels really good now," Bruce said. "Got out of the orthotics, which was a big goal for me. And just taking some swings in the cage a minute ago, there were swings and passes with my bat, my barrel, that just wasn't there prior. So, I was out there playing. I wasn't performing. Obviously, I'm not a guy to make excuses, as you guys I think know, probably. But I look forward to having kind of a full quiver, if you will."

Bruce went 9-for-25 (.360) with a home run and a double in seven rehab games at Class A St. Lucie, playing both first base and right field. To open a spot for him on the active roster, the Mets optioned utility man Jack Reinheimer to Las Vegas.