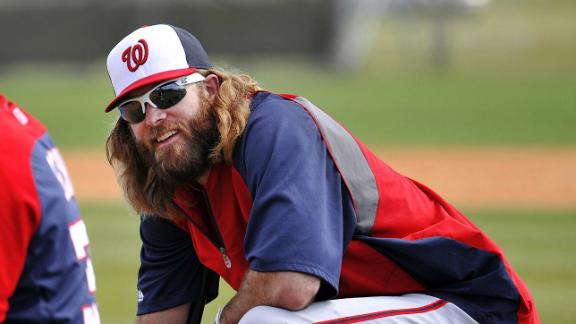 FAIRFAX, Va. -- Washington Nationals outfielder Jayson Werth was convicted Friday of reckless driving and sentenced to 10 days in jail for driving his Porsche over 100 mph on the Capital Beltway earlier this year.

"I-495 is not a racetrack," Azcarate said in imposing the sentence. She added that her sentence would be the same regardless of "what a person does for a living."

Werth, wearing glasses and a conservative suit, briefly took the stand in his own defense. He conceded that he may have been going 90 mph, but disputed that he ever broke 100. He immediately appealed his conviction to Fairfax County Circuit Court.

It is not unusual in Virginia for defendants to receive short jail sentences on reckless driving convictions where the speeds exceed 100 mph.

Werth's lawyer, Rod Leffler, sought unsuccessfully to have the case tossed out, questioning the reliability of the trooper's pacing of Werth. Leffler also asked the judge to take into account that the speeding occurred at 9:30 a.m. on a Sunday morning, when traffic was light. Leffler did not return a call Friday seeking comment.

While the judge imposed a 10-day sentence, in reality Werth would likely serve only five days because of rules and procedures at the county jail.

During the trial, state trooper P.L. Green testified that on July 6, he followed Werth for about half a mile on the beltway at 105 miles an hour before pulling him over on the exit to the George Washington Parkway. Green said he drew his weapon as a precaution as he approached Werth, though he quickly holstered it and said the conversation they had during the stop was cordial. Green said he asked Werth what he was doing and Werth said "he was pushing his luck."

Nationals general manager Mike Rizzo said in a statement Friday that Werth "has cooperated fully with the authorities throughout this process" and declined further comment.