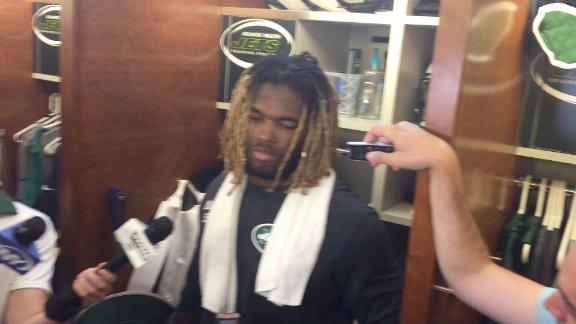 ESPN
By Rich Cimini
FLORHAM PARK, N.J. -- New York Jets linebacker Lorenzo Mauldin, who is being sued by a Queens, New York, man for assault, said Tuesday he was "shocked" by the lawsuit.

"Of course I was shocked, but with everything going on right now, it's pending," Mauldin told reporters at the start of the team's mandatory minicamp. "You don't know what the outcome is going to be, so I'll just refer everything to my attorney for questions."

In the suit, first reported Sunday by the New York Post, Jean Lopez, 22, said he suffered multiple facial fractures after being attacked April 2 at a nightclub in Manhattan. The incident occurred when Lopez accidentally spilled champagne on Mauldin, according to the suit.

No criminal charges have been filed, according to a New York Police department spokesman. The NYPD and the Manhattan district attorney are investigating.

Another man, Reginald Cook, also is named in the suit. He "acted in concert" by "pushing, grabbing and/or restraining" Lopez, the Post reported.

"The lawsuit as it relates to Lorenzo Mauldin is completely without merit," Mauldin's attorney, Mitchell Schuster, told ESPN. "He looks forward to defending himself against these frivolous charges and we're confident he will be cleared.

"His only involvement was that he was a witness to someone striking the plaintiff. There are multiple witnesses that will confirm that Lorenzo Mauldin had nothing to do with this."

The plaintiff was unable to identify Mauldin in the police report as one of his attackers, according to Schuster.

No trial date has been set.

In another off-the-field incident, linebacker Darron Lee declined to comment on the NFL's investigation into an incident that occurred June 3 at a music festival in New York. Cell-phone video from an eyewitness, posted on Twitter, showed Lee being forcibly removed by teammate Leonard Williams during a verbal dispute with an unidentified woman.

Coach Todd Bowles spoke to Lee about the incident, later telling reporters the former first-round pick "had an argument with his girlfriend." He wasn't disciplined by the team, Bowles said.

"I knew you guys would probably ask questions about that, but the NFL still has an investigation going on, so I can't really answer anything right now," Lee said.