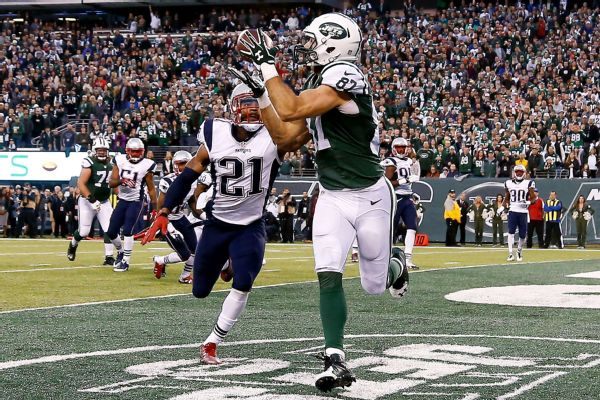 Unable to facilitate a trade, the New York Jets followed through Monday on their plan to part ways with Eric Decker, announcing the wide receiver's release.

The Jets received trade interest for Decker, but his salary was a stumbling block. He had two years, $14.75 million remaining on his contract, none of it guaranteed. The Baltimore Ravens, who showed interest in a trade, agreed to sign veteran wide receiver Jeremy Maclin on Monday.

"I want to thank Eric Decker for his contributions to the New York Jets over the past three seasons," Jets owner Woody Johnson said in a statement. "While with us, he was a competitive, productive, and dependable receiver who represented the team well both on and off the field. On behalf of the organization, I wish him the best as he continues his career."

Decker's departure was only a formality, as general manager Mike Maccagnan indicated last Tuesday that Decker no longer fit their plans.

"We think very highly of Eric, and our focus right now is seeing our young players, how they do," Maccagnan said.

A day later, Decker said goodbye to the Jets and their fans in a series of tweets.

All told, the Jets have released or traded 11 veterans this offseason, a total of $68 million is savings. They released popular linebacker David Harris last week on the same day they informed Decker of his imminent departure.

With Decker gone, the Jets' top two receivers are Quincy Enunwa and Robby Anderson, who have a combined total of 122 career catches. Rookies ArDarius Stewart and Chad Hansen -- drafted in the third and fourth rounds, respectively -- figure to see significant playing time.

Decker was limited to only three games last season because of a torn rotator cuff and a torn labrum in his hip, both of which required surgery. He returned ahead of schedule and had been practicing throughout OTAs.

His best season with the Jets came in 2015, when he teamed with Brandon Marshall to form one of the most prolific receiving tandems in Jets history. Decker finished with 80 catches for 1,027 yards and 12 touchdowns.

In seven years, including four with the Denver Broncos, Decker has 383 receptions, 5,253 yards and 52 touchdowns.