Jets: Too early to tell if Eric Decker needs surgery 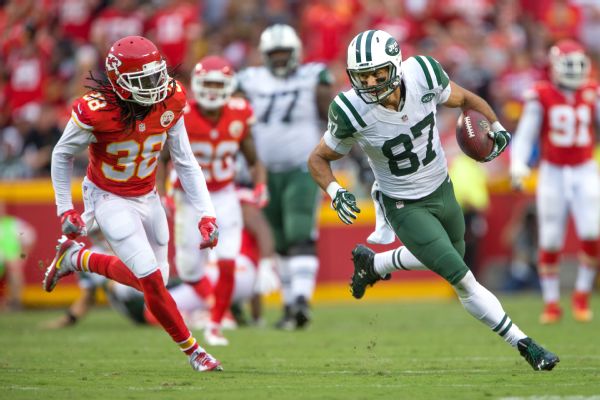 Coach Todd Bowles called it a "week-to-week" injury, indicating that surgery isn't planned at this time. The team's hope is that Decker can get back on the field with rest and rehab, although Bowles didn't rule out surgery down the road.

"It's too early to tell, from what I'm told," Bowles said, on whether Decker will need surgery. "It's just week to week right now, if it gets to that point later on we'll make that decision."

Decker was injured in Week 2 against the Buffalo Bills, but he played in every offensive snap last Sunday against the Kansas City Chiefs. He caught only one pass in the game. On Tuesday, he told team officials he had aggravated the injury.

Decker didn't practice this week, eventually going for an MRI exam that confirmed the partial tear.He said he is hoping to avoid surgery.

"Yeah, for sure," Decker said. "That's why at this point it's just, see how much strength and range of motion I get back. We've got a plan, with the training staff and the coaching staff. We'll stick to the plan and see what happens."

The timing couldn't be worse for the Jets, especially quarterback Ryan Fitzpatrick, who threw six interceptions last week. Quincy Enunwa will move in the No. 2 role, alongside Brandon Marshall. Rookie Robby Anderson will be the No. 3.