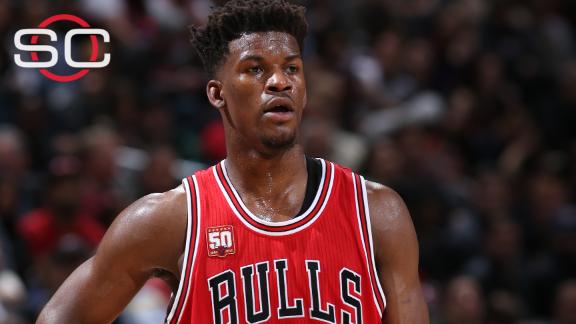 Chicago Bulls star Jimmy Butler did not fly with the team Sunday to New Orleans for its game Monday night, according to league sources.

One source with the Bulls said Butler had a family commitment and would fly to New Orleans later Sunday night and that he will play against the Pelicans.

"It's the first time he hasn't flown with the team,'' one source said. "But he will play tomorrow for sure.''

Neither Butler nor Bulls general manager Gar Forman could be reached for comment, but Butler's agent, Happy Walters, told ESPN.com that he was unaware that his client was not on the team plane.

"Maybe he had stuff to take care of,'' Walters said. "Whatever he's doing, he'll be at the game.''

The outcome of the game will have no bearing on the postseason, after theIndiana Pacers'victory over theBrooklyn Netson Sunday eliminated Chicago from playoff contention. This is the first season since 2007-08 that the Bulls have not reached the postseason.