Joe Haden on Browns' laughingstock status: 'Nothing you can do but go win' 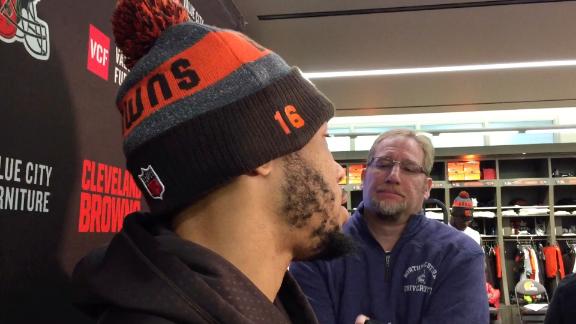 BEREA, Ohio -- Joe Haden reached his limit when he saw that a computer simulation this week had the University of Alabama beating the Cleveland Browns 34-0.

The simulation, run by Bleacher Report, was funny to some.

It wasn't to the defensive back Haden or any of his Browns teammates, who have struggled through a winless season in Cleveland.

"Comparing a college team to an NFL team -- it's disrespectful," Haden said Friday.

Late-night talk show hosts Jimmy Fallon and Stephen Colbert are having fun at the Browns' expense, and a fan is planning a "Perfect Season Parade" if the team finishes 0-16.

"I've never been in a situation like this where we're literally the laughingstock of every joke," Haden said.

Haden voiced the frustration felt by every player and coach in a long and difficult season. The Browns are trying to avoid becoming the second team in NFL history to go 0-16, and every loss takes a piece out of everyone.

A Browns fan named Chris McNeil has planned the parade around FIrstEnergy Stadium. McNeil has met with the city of Cleveland about permits and as of Friday, 4,500 accounts had checked "going" on the parade's Facebook page.

"It's terrible," Haden said. "You're talking about an 0-16 parade. ... It's very, very tough. It hits you right between the eyes. Because I'm on the team, there's something I can do about it."

The simulated game, to him, was "the worst thing I've ever seen."

"That's a smack in the face," Haden said. "It makes you very upset. That's just a slap in the face. It doesn't make any sense. Alabama is great. They've got amazing players. They've got players who are going to play in the NFL. We've got a team full of NFL guys."

Players have seen coach Hue Jackson nearly break down at a postgame news conference when he called being 0-12 "the hardest thing ever."

Running backDuke Johnson merely shook his head and said there was no way to put into words what it's like to be 0-12. Andrew Hawkins tried.

"It's different," the receiver said.

Hawkins doesn't pay attention to the external noise. He said he wasn't aware of the late-night jokes or the parade.

"Appreciate the update," he said with a smile.

Once he heard of the simulated score against the Crimson Tide, Hawkins simply said, "Sweet."

Haden said he can't watch sports highlights or almost any game without hearing a Browns joke.

"And you're hearing it from everywhere," Haden said. "Everybody is giving it to you. There's nothing you can do but go win. There's nothing that can change this but winning. Until we get that changed, we're going to be the laughingstock."

Haden has made Cleveland his home and is well-liked in the community, but he said he's not going out in public these days.

"Why would I go out?" Haden said. "Everybody in Cleveland, they recognize me. I'm a professional athlete in the city of Cleveland. When it's not the season, I'm hanging out. It's just so much easier to be able to talk. But now, there's really nothing to say."

Sunday will make 364 days since the Browns last won a game, a 24-10 victory over theSan Francisco 49erson Dec. 13, 2015. That victory came with Johnny Manziel at quarterback. The only way to avoid going winless for a full year would be to beat the Bengals on Sunday.

But Haden does not see that as motivation.

"There's no more sources of motivation, bro," Haden said. "We keep losing all the games. You have to win a game. No other ulterior motivation can make you go harder, play harder, do anything.

Being winless is all the motivation Joe Haden needs
CB Joe Haden thinks it is disrespectful for the Browns to be compared to a college team and talks about his motivation to win a game.
Related topics:
sportsespnhue jacksonnflstephen colbertjoe hadenduke johnson jrlaughingstockparadecleveland brownsandrew hawkinsjimmy fallon
Copyright © 2020 ESPN Internet Ventures. All rights reserved.
More Videos
From CNN Newsource affiliates
TOP STORIES