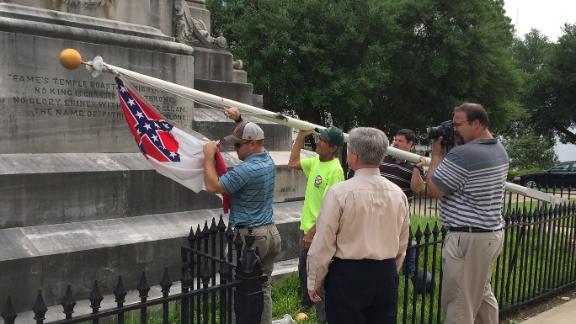 During an SEC coaches conference call Monday, Calipari said that "obviously, it offends a portion of our society, so people are deciding to take them down. That's how I feel. It may offend, so I'd say do it."

Calipari's comments came a day after Martin joined other athletic leaders at his school in saying the Confederate flag should be removed.

Martin made his thoughts on the issue known via Twitter,calling the flag an antiquated symbol that represents "hate and oppression to so many people."

Calipari asked a reporter if Kentucky uses the flag -- it doesn't. He was told that a statue of Confederate President Jefferson Davis stands inside the state capitol in Frankfort. Statues of two other Confederate leaders stand in downtown Lexington.

The seventh-year coach deferred to the "powers that be" on that and added, "I'm not running for public office. ... I was thinking about running for president, but was discouraged from that."

Calipari later took to Twitter to make it absolutely clear to fans that he feels the flag should be removed.