Jose Altuve is a magician whose brilliance should be treasured 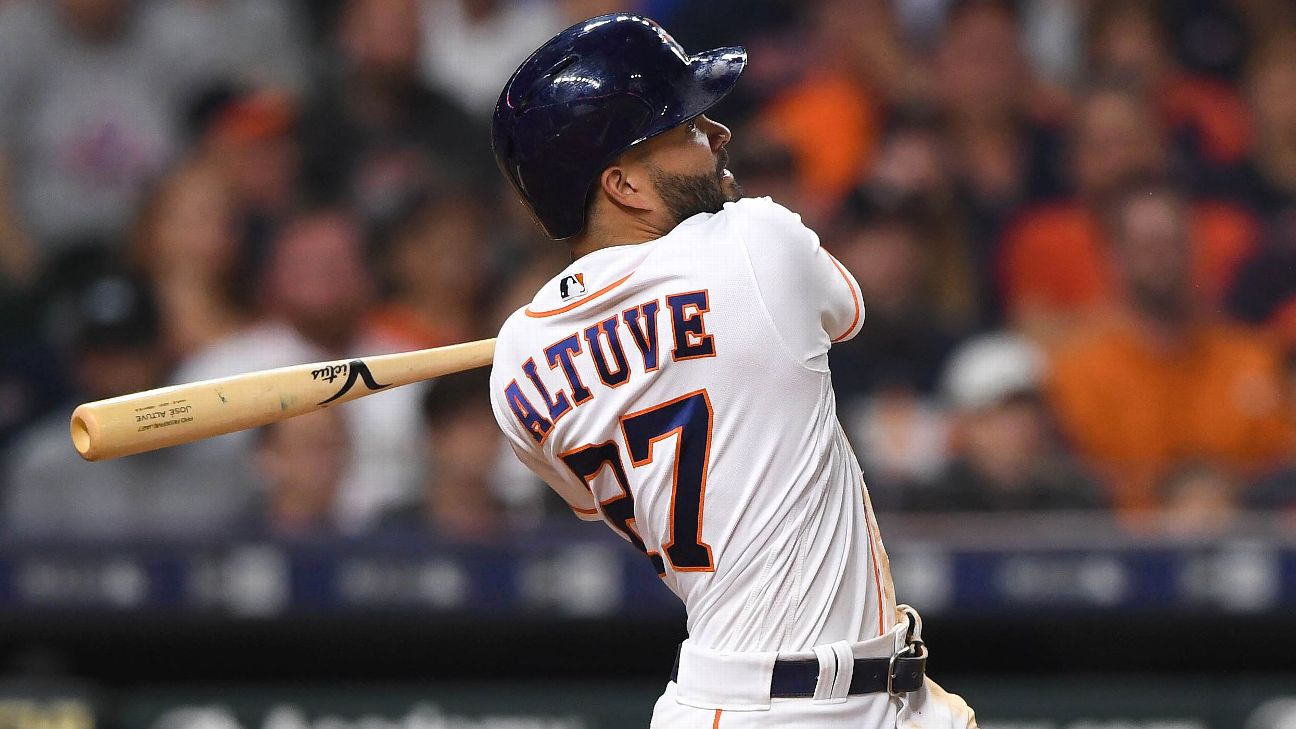 Jose Altuve is the reigning American League MVP, he leads the majors with a .343 batting average, theHouston Astrosare having a terrific season ... and yet we've hardly talked about him and that seems a little weird. After all, the man is a baseball treasure and we should always remind ourselves of that.

Altuve went 3-for-4 with two home runs off Nathan Eovaldi in the Astros'5-1 win over the Tampa Bay Rays on Wednesday. Here's the first one, and it reminded me of an old-school swing by Joe DiMaggio or somebody like that, in part because Altuve stands way off the plate like batters used to back in the day, rather than crowd the plate like so many of today's sluggers:

If you pause the video right at the end of Altuve's swing, notice how far off the plate he is. He's just so quick through the zone, however, that he can turn on those inside pitches. Here's a weird Altuve stat, his home/road splits over the past two seasons, including this two-homer game:

On the road, he's Rogers Hornsby. At home, he's still pretty good, but more like 2018 Jed Lowrie. I'm not sure what's going on here. It could just be one of those things, but in 2016 he hit .376 on the road and .299 at home. He was much better at home earlier in his career. The stat that pops out is that strikeout-to-walk ratio. It's even on the road, but more than 2-to-1 at home.

I don't know if he just doesn't see the ball as well at Minute Maid Park, or maybe he's more aggressive at home trying to hit home runs. His swing rate is basically identical at home and on the road (48.0 percent at home versus 47.8 percent), but his miss rate jumps from 14.8 percent on the road to 19.2 percent at home.

It's worth noting, however, that the entire team has hit worse at home over the past two seasons, with a .782 OPS at home versus .832 on the road. Indeed, despite its reputation as a hitter's ballpark -- and there's no doubt some cheap home runs can be hit into the Crawford Boxes in left -- Minute Maid actually rates as a pitcher's park. ESPN's park factors rate Minute Maid 27th in 2018, ahead of only Dodger Stadium, Oakland Coliseum and Citi Field. It rated last in 2017 (although average in home runs).

Anyway, Altuve is now hitting .347 with seven home runs. The power is down a bit from last season, but this guy is still a magician at the plate and could be on his way to his fourth batting title.

Stanton becomes a True Yankee: The Mariners and Yankees were tied 5-5 in the bottom of the ninth when Giancarlo Stanton came up with two outs and a runner on. Yankees broadcaster Michael Kay mentioned that Stanton was still looking for his signature Yankees moment. Two pitches later, Ryan Cook hung an 0-2 slider and Stanton delivered his 453-foot moment of baseball joy:

Stanton had a quick smile during his postgame interview but answered in team-first mode about his best moment in a Yankees uniform. "We came from behind. Not worried about my own personal signature moment," he said. "We all battled back, we grinded, we knocked some off the board one by one; just happy to get it for us."

The Yankees rallied from a 5-0 deficit, including Gary Sanchez's two-run homer off Alex Colome to tie the game in the eighth. The Yankees lead the majors in runs per game and home runs. With 120 homers in 71 games, they're on pace for 274, which would break the record of 264 set by the 1997 Mariners.

The scary thing for the AL: What if Stanton heats up?

Jason Heyward has a cannon: The Cubs beat the Dodgers 4-0 as Jon Lester won his fifth straight start, even though he recorded just one strikeout in seven innings. That was the first game this season a starter made it through seven innings with one or fewer strikeouts. Lester did get help from Heyward with this throw:

Bradford Doolittle writes from Chicago that the Cubs have served notice: They're the team to beat in the National League.

Best night for hyphens in MLB history: The Rangers beat the Royals 3-2, but they made history in a unique kind of way:

This was the first game behind the plate for Isiah Kiner-Falefa, who started three games there at Triple-A before his call-up and 67 over his minor league career. He's a pretty interesting player, as he can play shortstop and has posted outstanding defensive metrics at third base with plus-7 defensive runs in just 288 innings. He has hit .255/.332/.363 and looks like he's going to carve out a nice career as a utility guy -- especially if he adds catcher to his versatility.

Best night for Josh Smiths in minor league history: The Pawtucket Red Sox beat the Buffalo Bisons 10-2. The winning pitcher: Josh D. Smith, who allowed one hit in six scoreless innings. Getting the three-inning save: Josh A. Smith. Josh D. is a 28-year-old lefty who has never pitched in the majors but has a 2.51 ERA as a swingman for Pawtucket. Josh A. is a 30-year-old righty who pitched for the Reds in 2015 and 2016 and made 26 appearances with the A's last year.

Random tweet of the night: This is pretty funny:

Neshek parlayed that minor league contract with the Cardinals into an All-Star appearance in 2014 -- and he made another All-Star team in 2017. He has missed all of 2018 for the Phillies with a shoulder strain and then a forearm strain.

The true madness of Max Scherzer: Check out Eddie Matz's story on the Nationals ace and his obsessive quest for a third straight Cy Young Award.