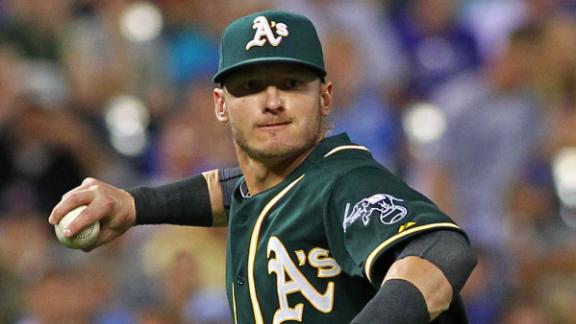 TORONTO -- Josh Donaldson has good memories of playing in Toronto. He made his major league debut there in 2010, striking out as a pinch-hitter. The following day he smacked a game-winning, two-run homer for his first career hit.

More memories are on the way. Next season, Toronto is his big league home.

"Toronto is a great place, a great city," the All-Star third baseman said during a conference call Saturday morning. "Every time I've been there it's been very beautiful."

Now, Donaldson will try to see what he can do about the ballpark. The Blue Jays went 83-79 last season and finished out of the playoffs for a 21st straight year, the longest active drought in baseball.

"I definitely think the elements are there to win," he said.

Donaldson is the second major acquisition of the winter for the Blue Jays, who signed catcher Russell Martin to a five-year, $82 million deal on Nov. 18.

Donaldson said he's excited by what he and Martin might bring to a lineup that already boasts shortstop Jose Reyes in the leadoff spot and sluggers Jose Bautista and Edwin Encarnacion in the heart of the order.

"You start looking at the capability of this lineup and the potential that it brings," Donaldson said. "I'm going to venture to say there's probably not going to be another lineup as potent as this in major league baseball."

He expects his power numbers to rise in hitter-friendly Toronto, saying he figures he lost at least 14 home runs last season to Oakland's spacious outfield.

Before he was called up to the A's in April 2010, Donaldson was participating in a fantasy baseball league with several minor league teammates at Triple-A Sacramento.

"I remember I had about three of four Blue Jays in my lineup and then I was catching (against them) the next day," Donaldson recalled. "I was like, 'This can't happen anymore.'"

Donaldson was at home in Alabama on Friday night when he found out he'd become a Blue Jay himself.

"I was up in my man cave playing some old school Mortal Kombat and watching The Golf Channel at the same time," Donaldson said. "I looked down and my phone just started exploding. I decided to check it out. The first text I see is 'Blue Jays?' I was like, 'Yup, I just got traded.'"

Less than 24 hours later, Donaldson said he was "still a little shocked" by the deal, but also finding new things to look forward to.

"Somebody on Twitter had put me in one of those Toronto Blue Jays uniforms, the all whites," he said. "I tell you what, those uniforms are pretty sexy."