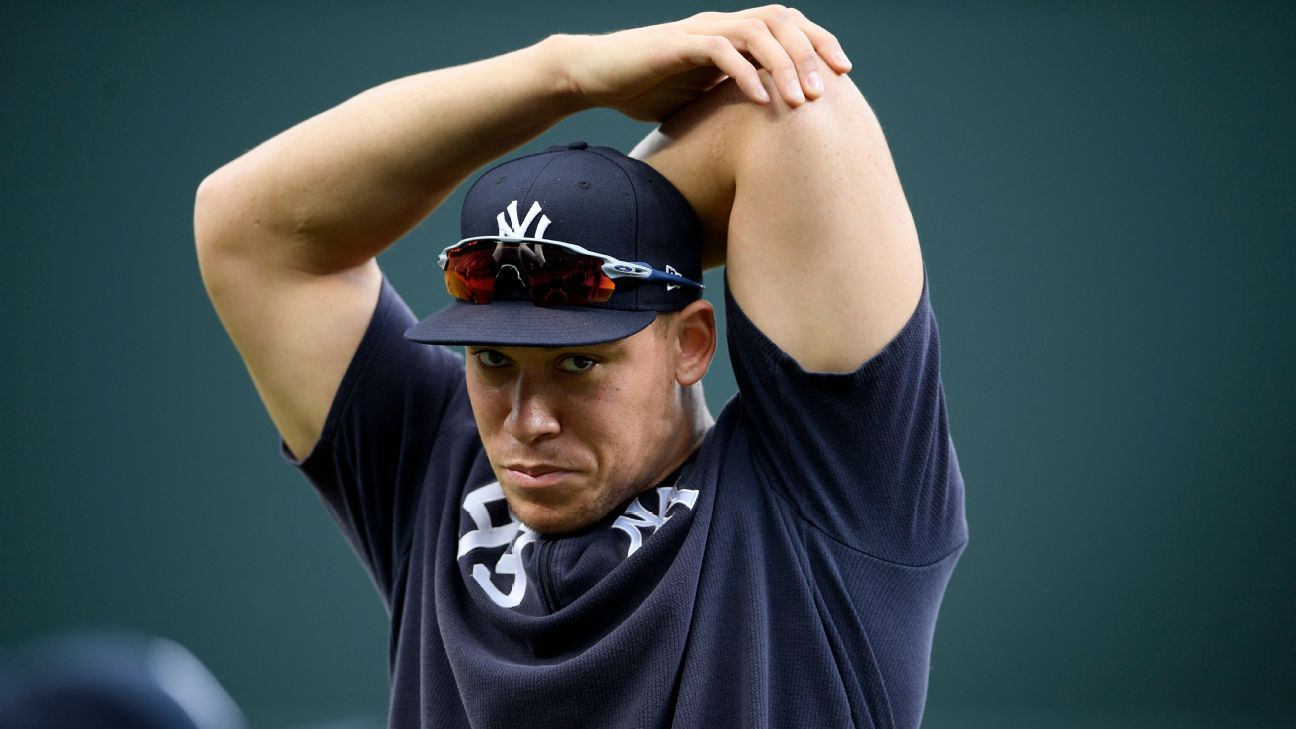 Several hours before Monday's series opener against the Baltimore Orioles, Judge was out on the field at Camden Yards going through running exercises and playing catch. It was the first time he had been observed playing catch since he suffered a left oblique strain on a swing in a game on April 20.

Judge also stretched with his teammates and carried a glove to the outfield as the Yankees started batting practice. He wouldn't be out there long, nor get to do much fly-ball shagging. Less than five minutes after starting batting practice, the Yankees were forced to cut it short when a brief, midafternoon downpour chased them from the field.

The one thing Judge still has yet to do in his rehab is hit, Boone said. Because of that, he couldn't give an updated timetable for when his powerful slugger might return.

"This is something that once he starts swinging the bat and hitting, we're going to know the injury's out of there and moved on," Boone said. "Then it's just about building him up. He's made steady progress, but not at that point yet.

Early Monday, Rookie of the Year runner-up Miguel Andujar underwent surgery to help fix a small labrum tear in his right shoulder. According to Boone, it went well.

"Now the road to recovery starts back, and should be fully good to go come spring," the manager said. "By the end of this year and hopefully into the offseason, he'll be doing a lot of things that are baseball-related that'll start working toward being good to go for spring training."

Andujar shared a picture of himself in the hospital after the surgery on social media.

Another injured Yankees star took a major step in his own recovery from injury Monday. For the first time since undergoing offseason Tommy John surgery, Gregorius played in a game.

Specifically, Gregorius took part in an extended spring training game at the Yankees' complex in Tampa, Florida. There, he faced members of the Detroit Tigers' organization. He went 2-for-4 with two singles and a walk. Gregorius also fielded three ground balls at short and recorded a throwing error.

Perhaps by the end of the week, Gregorius will begin a rehab assignment with the High-A Tampa Tarpons, the manager added.

"Got through [the game]. Hot day down there," Boone said. "Now a couple more days down there, and then hopefully gets transferred over to the Tarpons."

The Tarpons are already hosting one rehabbing Yankee. Outfielder/designated hitter Giancarlo Stantonwent 1-for-3 with a home run and two strikeouts Monday night in his first rehabilitation assignment as he continues his recovery from biceps/shoulder injuries that first shelved him April 1.

"It's just him getting reps and getting comfortable," Boone said. "He'll, in a lot of ways, let us know how he's feeling."

If Stanton feels well after the games he plays in this week, the Yankees will begin conversations to determine what's next. He's already spending at least a couple more games with the Tarpons. It's possible the Yankees decide to send Stanton elsewhere to finish his rehab process and face better pitching.

They could also call him straight up to the Yankees.

Also in Tampa, Tulowitzki, sidelined since April 3 with a strained left calf, has resumed batting practice and is taking ground balls at shortstop and third base. When the Yankees were in Tampa last weekend taking on the Rays, Tulowitzki came to coaches and asked about beefing up his defensive tool belt.

"When we saw him in Tampa, he proactively came to me and said, 'I'll do whatever I need to do.' If that means taking ground balls at different spots to add to his versatility a little bit," Boone said. "That was something that he wanted to make sure he initiated with us."
Report a correction or typo
Related topics:
sportsespndidi gregoriusaaron judgemlbmiguel andujarnew york yankeestroy tulowitzki
Copyright © 2020 ESPN Internet Ventures. All rights reserved.
More Videos
From CNN Newsource affiliates
TOP STORIES