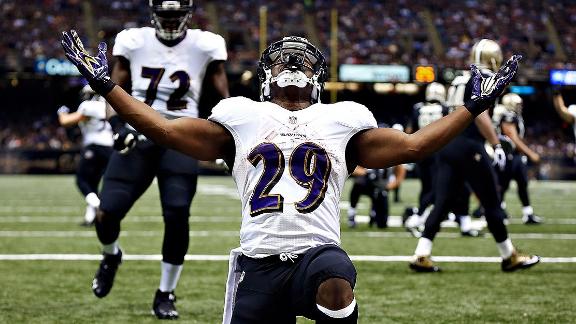 Forsett put a large screen television in the locker of every starting offensive lineman as well as tight end Owen Daniels. The total bill came to around $9,000, which is a hefty sum for someone who is earning the veteran minimum $730,000 this season.

"To say you ran for 1,000 yards, that's something I've wanted to do since I started and it's been a big goal of mine," Forsett said. "I know a lot of guys have bought Rolexes and more lavish gifts, but my bank account doesn't work that. So, I did what I could and those guys appreciated it."

Forsett, who is playing for his fourth team in four seasons, has been among the biggest surprises of the season. Replacing Ray Rice as the Ravens' starter, Forsett is sixth in the NFL with 1,147 yards rushing.

"I think from the first time I heard him speak, you knew he had a great head on his shoulders," Pro Bowl guard Marshal Yanda said. "He's a great dude."

In a similar move of gratitude, Packers quarterback Aaron Rodgers rewarded his linemen and backup quarterbacks with 55-inch Samsung curved smart TVs, tablets and Beats headphones earlier this week. Rodgers, unlike Forsett, makes a lot more than the veteran minimum.