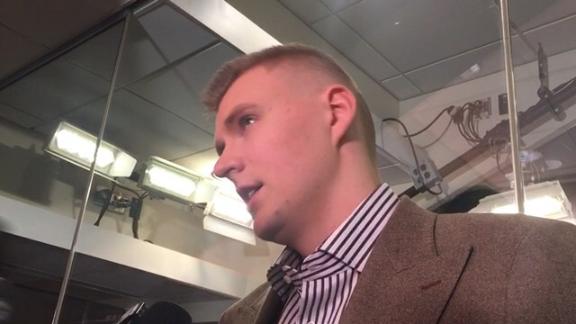 ESPN
By Ian Begley
NEW YORK -- Injured New York Knicks star Kristaps Porzingis has no specific timetable for his return from ACL surgery, but he's confident that he'll eventually return to All-Star form once he gets back on the court.

"I believe that I'm going to come back better and stronger," Porzingis said Tuesday in his first public comments since he suffered a torn left ACL in early February.

Porzingis said he has been progressing well since undergoing surgery on Feb. 13.

"[I've] been having a positive mindset this whole time and just going day by day, doing whatever I need to," he said. "Every day is a little progress, a little something, and just moving forward and getting better every day with my knee."

The 22-year-old said it was too early in his rehab to provide a specific timetable for return. He is expected to be out at least 10 months from the date of surgery, per ESPN sources.

Porzingis said he was 'shocked' when he first learned that he'd torn his left ACL.

"I couldn't believe that it happened to me. And then about 30 seconds later I said, 'Ok what can I do now? Now it's just time for me to make a comeback and focus on the next thing,'" he said.

Porzingis, who was walking without a noticeable limp on Tuesday, said he will use his time off the court to strengthen his entire body while healing his knee.

"Not only just getting bigger and stronger but just my movement, my body, the way my body moves and all those things. That's going to be big for me also because of how long I am," the 7-foot-3 Porzingis said. "So I think I don't know how many months I have, [but] I'm going to use it as efficiently as I can to come back as a better player and also work on my mind ... and come back sharp."

The injury is a brutal development for a Knicks team that is hoping to build a young core around Porzingis, who was named to the All-Star team for the first time this season.

He was averaging a team-leading 22.7 points and an NBA-high 2.4 blocks per game at the time of the injury, which occurred when Porzingis landed on Giannis Antetokounmpo's foot after converting a dunk during a loss to Milwaukee in early February.

His injury had a ripple effect for New York this season. Before Porzingis went down, the Knicks remained hopeful of making a playoff run. With Porzingis out, the Knicks recalibrated and have been playing younger players such asFrank Ntilikina, Emmanuel Mudiay and Trey Burke more over the remainder of the season.

They had lost 15 of their past 16 games entering Tuesday's game against Dallas and hope to add an elite player in the 2018 NBA draft.

When asked about it, Porzingis said he hasn't thought much about the team's future. He said he is "confident" that team president Steve Mills and general manager Scott Perry will make the right decisions to improve the club.

"I haven't been really thinking about that as much. It's something that, it's their job, and it's in their hands, and we'll see what happens this summer," said Porzingis, who is eligible for a five-year, $157 million extension this summer. "I haven't really thought about it, and it's also not my job. So I'm confident that they will make the right moves."

He also said that he didn't feel the need to be involved at all in the draft process.

Porzingis had been at odds with the organization last summer but has since said he wants to be a Knick for the rest of his career. The Knicks had been comfortable with the idea of offering Porzingis the rookie extension this summer prior to his injury.