Kyle Turris a hero in more ways than one for Ottawa 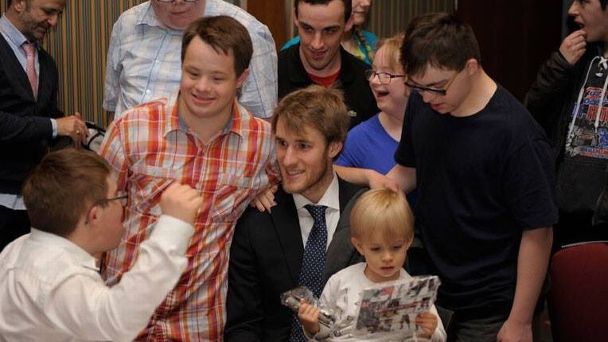 NEW YORK -- Sure, Kyle Turris scored in overtime in the Ottawa Senators' Game 5 victory over the New York Rangers on Saturday to give his team a 3-2 series lead. But he did something far, far greater after the game.

The 27-year-old center, along with his wife, Julie, and son, Beckett, attended the end-of-season banquet for the Capital City Condors, a hockey program for children with developmental disabilities.

"We were going to the banquet win or lose, goal or no goal. So, I don't think it was that big of a thing," Turris said Monday, after the Senators' practice at Madison Square Garden. "But all the attention the Condors can get, they deserve. They're such an amazing group and Julie and I are lucky to be involved with them."

Turris has served as the Condors' honorary captain since shortly after being traded by the Coyotes to the Senators in December 2011. And it sounds like a "job" he thoroughly enjoys.

"[The kids] are just so happy to be playing hockey and doing something their other friends can do that they didn't have the opportunity to do before," Turris said. "When a person scores on our team, the other team comes over and bear hugs them -- it's things like that that are really special."

The Senators, meanwhile, are one win away from advancing to the Eastern Conference finals for the first time since 2007, and for only the third time in franchise history.

But it won't be easy. The Rangers dominated the Senators in Games 3 and 4 in New York, winning 4-1 each time. The Senators fell behind early in both games. In fact, they've given up the opening goal in all five games in this series.

"Yeah, that'd be nice," Turris said, chuckling, when asked about scoring first for a change in Game 6 on Tuesday night. "But that just goes back to getting off to better starts, and having our legs early, and putting the puck in their zone and keeping it there as opposed to the other way around."

"The only focus we've got is the first 10 minutes of [Game 6], which need to be better than they were the last time that we were here," Ottawa coach Guy Boucher said Monday. "We're definitely not looking at clinching, or after the game, or the next game. It's 10 minutes -- we've got to have a good 10-minute start because we know [the Rangers] are going to come out surging."

It's a tall order. The Rangers have won 10 of their past 11 playoff games in which they have faced elimination at Madison Square Garden, dating back to 2008. The Senators might be leading the series, but have led on the scoreboard for only 13 minutes and 10 seconds out of a total of 329 minutes and 22 seconds played.

On the other hand, they've found a way to win three one-goal games at home, including dramatic, late third-period comebacks in Games 2 and 5.

"Our guys have displayed a lot of character," Boucher said. "They've developed a team soul -- there's a collectiveness to this group that really displayed an ongoing bond and a growing bond throughout the entire year. And it comes from outside-of-the-ice stuff and on-ice stuff."

Turris has been a big part of that. The third overall pick in 2007 had a rocky start to his career with the Coyotes, but has blossomed in Ottawa. He scored a career-high 27 goals this season. He also scored a big goal in Game 4, and scored in the Senators' Game 6 closeout of the Boston Bruins in the first round.

But it'll be hard to beat what he did on Saturday, both on and off the ice.

"It was unbelievable," Turris said. "Julie and Beckett and I walked into the banquet hall, and there had to be a couple hundred people, and all the kids come running at us and just bear hugging us, 30 or 40 kids. It was something I won't forget."