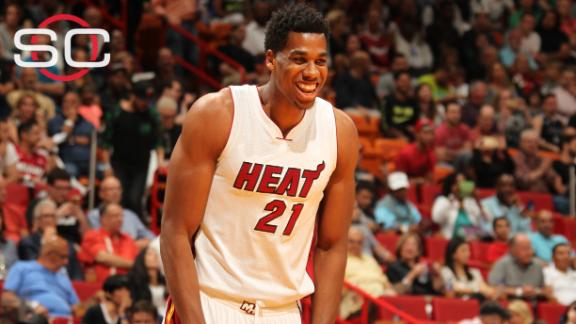 With rim protection and perimeter shooting ranking as the Lakers' foremost areas of concern heading into the open market, sources told ESPN that Whiteside has emerged as a priority target.

The Lakers, like the Heat, are still hopeful of securing a face-to-face recruiting meeting with Oklahoma City Thunder star Kevin Durant once free agency begins at 12:01 a.m. ET July 1. But the Lakers, sources say, are highly intrigued by Whiteside and what he could bring them as a double-double presence inside.

ESPN reported earlier this week that the Mavericks also intend to be a serious suitor for Whiteside, with Dallas expected to land one of the first recruiting meetings Whiteside conducts in the opening hours of free agency. The Portland Trail Blazers are another team that has been linked with Whiteside, and there will surely be others.

After averaging 14.2 points, 11.8 rebounds and a league-leading 3.7 blocks per game last season, Whiteside is expected to command a maximum contract, with a first-season salary forecast in the $22 million range.

"More than likely, players out there in free agency, our No. 1 priority is Hassan Whiteside," Heat president Pat Riley told reporters after the season.

ESPN also reported this week that that Lakers, Orlando Magic and Detroit Pistons are among the teams expected to pursue Atlanta Hawks free agent-to-be Al Horford.

Longtime Heat star Dwyane Wade will also be a free agent and is expected to stay with the only team he's ever played for.

The Heat have only early Bird rights on Whiteside, meaning they must use cap space to sign him for more than a league average salary and cannot offer a fifth year on his deal. A maximum contract for Whiteside would be a projected $94.8 million over four years.