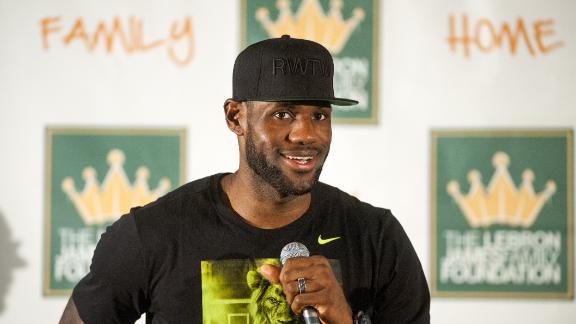 After playing his entire career with the weight of expectations of being the "chosen one" on his shoulders,LeBron James decided to shed some actual weight heading into his 12th season this fall.

"I lost a few pounds," James said during an interview on CNN's "Unguarded with Rachel Nichols" set to air Friday. "I haven't been in this weight class."

James, listed at 250 pounds last season but long rumored to be closer to the 270-pound range, did not reveal his specific weight but copped to undergoing a "very strict" diet that lasted 67 days during the offseason.

"I'm in the 250ish range, you know, a lot lighter than I've been playing at in the last few years," James said. "But I feel good."

The four-time MVP already has received a lot of attention for his trim look after he posted photos showing off his slimmed-down body on Instagram this summer.

"I'll tell you what I couldn't have -- no carbs, no sugar, no dairy, no refined sugar -- no nothing. Meat. Fish. Veggies. Fruit," James said.

"I had the cookie monster chasing me a few times in my dreams," James said jokingly.

James, who turns 30 in December, will open training camp with the Cleveland Cavaliers on Friday -- his first official function with the team since shocking the basketball world in July and choosing to go home to Ohio rather than remain with the Miami Heat.

The two-time champion said returning to the place he affectionately calls "The Land" was something he's thought about since going to Miami in 2010, but he figured it would happen in the twilight rather than the prime of his career.

He also said he likely would have stayed with the Heat if they had won the championship this summer.

"I mean, it's a greater chance, for sure," he said in the CNN interview. "I mean, it's-- it would be hard to leave-- back-to-back-to-back -- championships, you know, and try to go for four. But obviously, you really can't live -- and think of what may have happened. You just kind of -- for me, I've always been a person kind of live in the moment."

While James was bombastic in his early days with the Heat, predicting he and his teammates would win so many championships that "not six, not seven" would even be enough to satisfy him, he is taking a more measured approach with the Cavaliers.

Just because he isn't predicting an immediate title in Cleveland doesn't mean everything will be going slowly for him this season. He says the weight loss has already made him faster on the court.

"I am (quicker)," James said. " And that's not such a good thing for the competition."