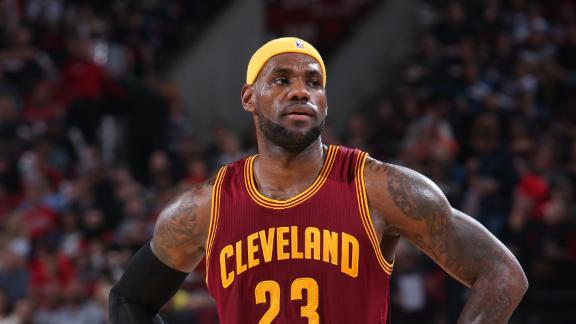 PORTLAND, Ore. -- The Cleveland Cavaliers' Big Three era has started off with two losses in its first three games, and after the latest setback, a 101-82 defeat to theTrail Blazers on Tuesday, LeBron James made it sound like he's bracing himself for more tough times ahead.

"We have to understand what it takes to win," James said. "It's going to be a long process, man. There's been a lot of losing basketball around here for a few years. So a lot of guys that are going to help us win ultimately haven't played a lot of meaningful basketball games in our league.

Irving and Waiters were on the team the last two seasons, of course, as the Cavs racked up a combined record of 57-107.

James did not call out any teammate by name, but seemed to be referencing Irving's and Waiters' play when reflecting on what needs to change in order for Cleveland to start playing the right way.

"There's a lot of bad habits; a lot of bad habits have been built up over the last couple of years and when you play that style of basketball it takes a lot to get it up out of you," James said. "But I'm here to help and that's what it's about."

Irving did not speak to reporters after the game.

Kevin Love, who experienced his fair share of losing in the last couple of seasons in Minnesota, has been the most consistent Cavaliers player so far.

He finished with a team-high 22 points on 7-for-14 shooting and 10 rebounds against the Blazers -- marking his third double-double in as many games -- but had his struggles defensively as Robin Lopez scored 19 points on 8-for-11 shooting and LaMarcus Aldridge chipped in 16 points.

Cavs coach David Blatt deflected the blame from James on a night when the four-time MVP finished with 11 points, seven rebounds and seven assists along with three turnovers.

Even though James went scoreless in the second half en route to the least amount of points he's scored since Dec. 5, 2008, he managed to extend his double-digit scoring streak to 575 games, tying Karl Malone for the third-longest such streak in NBA history.

"I don't hold him responsible," Blatt said of James. "We have to help him get looks. It's not only about him. It's about helping him get looks. That's what I feel like."

Blatt chose to point the finger at the Cavs' defense, or lack thereof.

"I don't think we brought any type of mindset to defend," Blatt said, later adding, "We never took a stand defensively tonight at all."

There is no question the Cavs have started lame out of the gate, not only going 1-2 but also losing the battle of the boards in both losses after James said during the preseason that Cleveland should outrebound its opponent every game this season.

The question is, just how long will it take before the Cavs start to play like the team that many predicted would be in the championship chase come June?

"Hopefully not too long, but it could go on for a couple months until we're all on the same page. We know exactly where we need to be both offensively and defensively and we buy in on what it takes to win," James said. "I think a lot of people get it misconstrued on what it takes to win [by thinking] just scoring or just going out and trying to will it yourself. This is a team game and you have to rely on your teammates as well. So we will get an understanding of that as the time goes on."

It's been well-documented that James experienced similar growing pains during his last stop with the Miami Heat. The Heat lost their first game in 2010-11 and stumbled to a 9-8 start before winning 21 of their next 22 games.

Before the loss to Portland, Blatt was asked how many games his team would have to play before it would be a fair time to judge them.

"I think you got to go a good few games in," Blatt said.

"Yeah, something in that area," Blatt said. "That's a realistic indication."

James said he would lean on teammates Mike Miller, James Jones, Shawn Marion and Brendan Haywood-- each of whom has at least one championship ring on his rsum -- to help mold the group.

"It's just something we got to break collectively," Marion said. "We just got to come together and help each other. We're losing as individuals right now. We got to put it together as a team and that's going to take time. I think it's a new bunch of guys, new system, new coach, new everything. It ain't going to happen overnight, but we can resolve a lot of stuff by just playing together."

After uttering the word "challenge" four times during his 5-minute postgame session with the media and the word "process" six times, James ended his thoughts by sharing the story of how he restored his sky blue 1972 Chevy Caprice.

"You enjoy it when you see the finished product," James said. "For me, it's like building a car from scratch. I've done that before. I hated the process, it got on my nerves, I sent it back to get repainted a hundred times, and it came back and it still wasn't done [right].

"Once it was completely finished, you're excited about it. So that's what it feels like."

Growing Pains For Cavs
Following a 101-82 loss to the Blazers, LeBron James talks about the Cavs' early season struggles.

LeBron Sending A Message
Tim Legler says Cavaliers forward LeBron James sent a message to his teammates with his play in the second half of Cleveland's loss to Portland.