LeBron: Patience is key for Cavs 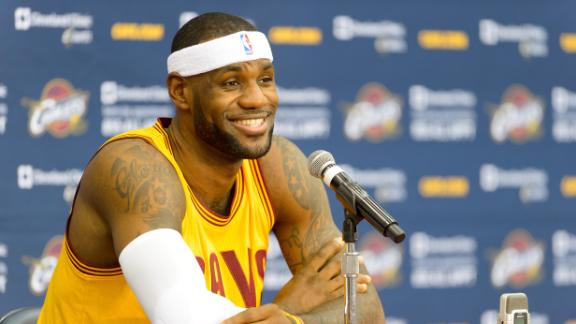 INDEPENDENCE, Ohio -- While the Miami Heat ushered in their Big Three era with a grand stage and a dramatic opening four years ago, there was more of a soft-launch feel when the Cleveland Cavaliers introduced the league's latest superteam at media day Friday.

Instead of fanfare and fireworks, there were intentionally tempered expectations by LeBron James, Kevin Love, Kyrie Irving and others in the organization.

Seeing James back in a No. 23 Cavs jersey might have been a familiar sight, but his demeanor in his first official day back on the job after returning home was far different than the guy who proclaimed the Heat would win "not six, not seven" championships when he got to Miami.

"Patience," said a subdued James when asked about the biggest lesson he learned in South Beach. "You need to be very patient with the process and understand. I think everyone always wants to see the end result and what's at the end of the tunnel, and don't quite understand what goes on from the start to the finish and what's in between that. And I understand that and I know that, so patience is the biggest thing that I've learned."

"There are a lot of great names that have come into the organization ... but I know from my multiple years of experience in the business that names don't play, teams do, and teams do need some time to develop, to find their identity, to establish themselves, and to establish what they're made of," Blatt said. "Our goals are high. We're not shying away from that. Does that mean championship today? I don't know. I don't know if that's fair."

The rest of the league might not find it too fair that James, a four-time MVP, is teaming up with Love -- a three-time All-Star at just 26 years old -- and Irving, the MVP of this summer's FIBA Basketball World Cup.

"It took me really until after the press conference [after he signed with the team in August] and all the way to now, moving here to Cleveland and getting settled in, for it to really hit home," Love said.

Even though Love is eager for a taste of success, having missed the playoffs in each of his first six seasons in the league, he too is endorsing James' step-by-step plan.

"Nothing is going to be given to us," Love said. "A lot of people want to say, 'Championship or bust,' and sure, that's going to be a good mentality to have because we want the pressure on us. We want people to look at us as one of the best teams because we're going to have to hold ourselves accountable for everything that we do with our actions on and off the floor. But I'm looking forward to building with this team."

Clearly it is a different ballgame with James back in town. There were so many credentialed members of the media Friday that reporters had to park at a steakhouse a half-mile down the road from the Cavs' Cleveland Clinic Courts practice facility and be shuttled back and forth.

"I couldn't find a parking place," Blatt said, marveling at the scene. "That hasn't happened to me yet."

James' presence was also the reason several of the Cavs' new players were in attendance, too -- from Love, to Mike Miller and James Jones, to accomplished veteran Shawn Marion.

"No," Marion said when asked if he would have considered Cleveland as a free-agency destination without James. "I'm going to be honest. No."

"When you cut LeBron loose in the free-agency pack, you tend to get results that you don't get otherwise," Cleveland general manager David Griffin said. "To say he's been an amazing partner this offseason would be a gross understatement."

All of the Cavs' offseason moves were especially felt by Irving, who went from being the team's most notable player to more of a complementary piece despite signing a max contract extension of his own in July.

"I was in the locker room and looking around, and somehow I've become the youngest on the team again," Irving said. "It's a weird feeling, but I'm truly appreciative of what management did this summer and all the pieces they added because it's just going to make my job that much easier."

The Cavs planned a team dinner Friday evening and will open with their first practice of training camp Saturday.

No matter how much the Cavaliers try to keep their focus on the first steps of the season, there will be pressure from day one from outsiders wondering how the team will finish.

"I still have a lot to prove because of the expectations I put on myself," said James, who has won two rings since last playing for the Cavs. "I ask more of myself than anybody could ever ask of me. So, yeah, my expectations are still high.

"So I wept from crying tears of joy and tears of frustration. Two up, two down, so I know. I know it all. I know what it takes. I'm a guy that, my expectations are still high because I believe in this team and what we can ultimately get to. But I also understand it won't be easy and we can't try to play November and get to June or May right now. We have to go November to December and the rest of the calendar year to even have a chance."

Cavaliers Open Training Camp
Jay Crawford reports from Cleveland, where Cavaliers superstar LeBron James and coach David Blatt spoke about leading by example and getting ready for the season.

Learning Curve For David Blatt?
Brian Windhorst discusses the advice David Blatt has received entering his first season with the Cavaliers and how he will earn his players' respect.