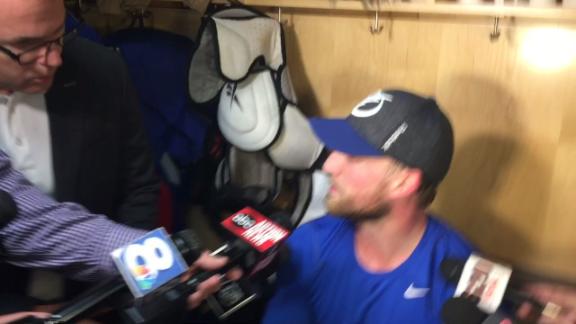 TAMPA, Fla. -- It's unlikely the Tampa Bay Lightning will have the services of goaltender Ben Bishop and captain Steven Stamkos for Game 4 of the Eastern Conference finals against the Pittsburgh Penguins on Friday at Amalie Arena.

Bishop, who suffered a lower-leg injury in Game 1, practiced with the team for the first time Thursday but was moving noticeably slower than normal during the 45-minute session. Stamkos has not yet been cleared for contact, and his frustration level appears to be near its tipping point.

The Penguins hold a 2-1 series lead after Wednesday's 4-2 win.

"We've moved into football terms now, so Ben Bishop is probably [doubtful]," Lightning coach Jon Cooper said. "I'd consider him in that doubtful range, but that's better than being out."

Prior to Thursday's practice, Bishop skated on his own to make sure his legs could get warmed up enough before he joined the team.

"It's better than yesterday. It's feeling better day to day and just keep taking steps forward here," Bishop said. "It's one of those things where you really want to come back as soon as possible, but at the same time you want to make sure you're ready. You don't want to come back and hurt the team."

Stamkos said his status has not changed. He's still in a "holding pattern" and hopes to return at some point.

"I'm hoping to, but there's still a real possibility that I may not play at all in the playoffs," Stamkos said. "It's tough when you have two different parts of the spectrum; it's either you're going to be able to play, or it's just not safe to play.

Stamkos has been sidelined since having surgery to remove a blood clot near his collarbone on April 4.