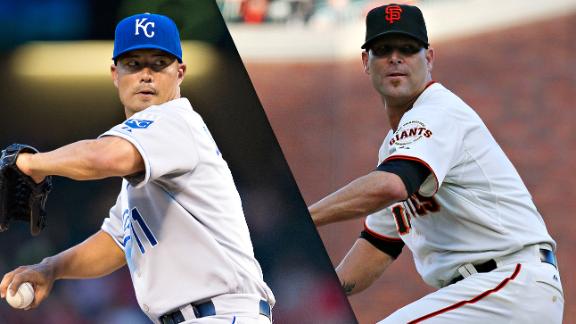 SAN FRANCISCO -- Royals outfielder Lorenzo Cainwill be moved from center field to right for Game 3 of the World Series on Friday night to boost defense in one of AT&T Park's trickiest positions.

Kansas City manager Ned Yost made the move Friday night with the best-of-seven matchup 1-all. Usual right fielder Nori Aokiis not in the starting lineup, while Jarrod Dysonis starting in center field and batting eighth.

"We've made a couple adjustments," Yost said. "We didn't scramble it up. I mean, we did, but it was out of necessity. With this vast outfield, we knew that we had to put our best defense out there."

Alex Gordon, who batted sixth in Games 1 and 2 this week at Kauffman Stadium, moves up into the No. 2 hole as the Royals lose their designated hitter -- Billy Butler -- in the NL ballpark.

With the loss of the DH, San Francisco's Michael Morseis out. The rest of the Giants' lineup is the same behind starter Tim Hudson, making his World Series debut at age 39 and after 16 major league seasons.