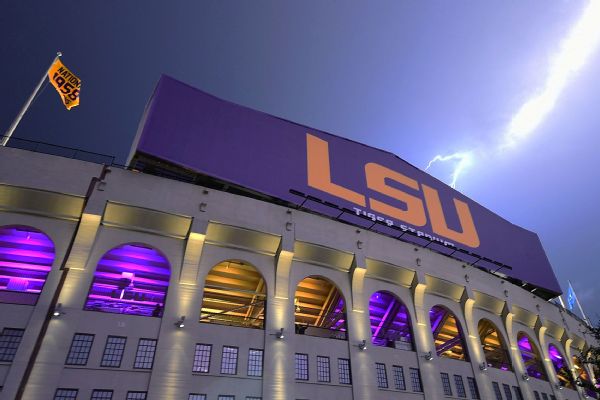 BATON ROUGE, La. -- From Ed Orgeron's perspective, Thursday's LSU-Florida decision was nearly as perfect as he could have hoped.

LSU's interim coach and his team will now host Florida on Nov. 19 instead of playing the Gators on the road, as the Tigers would have done Saturday had Hurricane Matthew not postponed the game.

LSU (3-2, 2-1 SEC) also maintains its open date on Oct. 29 ahead of a Nov. 5 showdown with No. 1 Alabama, which was a key negotiating point to Tigers athletic director Joe Alleva as the schools worked to find a makeup date.

"I think it's great, especially having the open date before Alabama and getting to play Florida at home," Orgeron said after Thursday's practice. "I believe it's a win, and I want to thank our administration, Joe Alleva. I know he worked very hard at keeping that open date and to have that home game here, so he did a tremendous job."

LSU still must play three SEC games in a span of 13 days, first visiting Arkansas on Nov. 12 and then hosting Florida on Nov. 19 before closing the season with a Thanksgiving night visit to Texas A&M on Nov. 24. That will be no easy situation to manage for Orgeron and his coaching staff.

"We're not going to make it an issue," Orgeron said. "It's the task we have at hand, and we're going to face that task when we get there, one day at a time, and that's far away. There's a lot of things that can happen between then, and we've got a couple good teams to play before them."

Orgeron learned of the LSU-Florida resolution just before taking the field for practice Thursday but opted against his first impulse to tell his team that the issue had been settled. He is preparing for just his second game as Tigers coach and wanted to make sure that the team's focus was on Saturday against Southern Miss and not on a game that will be played a month from now.

"I thought it was the wrong time to tell them: 48 hours before game time, [while in] preparation for Southern Miss, and all I preach is one game at a time," Orgeron said.

LSU, Florida and SEC officials have engaged in contentious conversations over how to handle the makeup date since they announced the postponement last Thursday. Alleva on Monday insisted that LSU would not give up a home game to travel to Florida on Nov. 19 and reiterated that he did not want to surrender an open date before the Alabama game.

Finally, the SEC announced that the schools would buy out nonconference games on Nov. 19 -- Florida against Presbyterian and LSU against South Alabama -- so the Gators could visit Tiger Stadium that day. The conference also announced LSU will play at Florida in each of the next two seasons.

The 18th-ranked Gators (4-1, 2-1 SEC) will lose two home games -- about $7.8 million in projected revenue from ticket sales alone -- but likely will recoup some of that through insurance.

That was a painful, but necessary, way to solve the ordeal, according to Florida athletic director Jeremy Foley, who spoke at a news conference Thursday.

"It was obvious that they were committed to that position and that it was going to be difficult to change that position, and therefore that we felt the only way to escape an even more difficult situation was to make the decision that we did," Foley said. "I think it would have been a huge mistake in my opinion, my staff's position and opinion, [Florida president] Dr. [Kent] Fuchs' position, for the University of Florida to draw a line in the sand, and then what would happen? And nothing good would have come out of that. At the end of the day, it's time to step up and do what you think is right and go play a football game."

The SEC statement also predicted that the conference's presidents and chancellors would agree to alter league bylaws to give its commissioner wider authority to solve further disputes such as the one that occurred between LSU and Florida.Current bylaws state that only the teams that play all eight conference games are eligible for the SEC Championship Game in Atlanta.

"It was important for us to come to a resolution," SEC commissioner Greg Sankey said in a statement. "Each university had its own set of concerns throughout the process; however, existing SEC regulations did not provide an avenue to resolve conflicting issues in a more timely manner. As I have repeatedly said, this game needed to be played. In the end, I want to give credit to the University of Florida for making concessions to move this year's game to Baton Rouge."

Foley said Sankey's authority to act was unclear in this situation and that it will surely be an issue that the league's athletic directors address at their meetings in December. The ADs have plans to make the necessary changes at the league's spring meetings next year in Destin, Florida.

"Obviously, LSU and Florida did not see eye-to-eye on this situation, but also understand the fact that they're dealing with situations too. It's hard for me to say that right now, but I do understand that," Foley said. "And so trying to move schedules around in a short period of time is extremely difficult, and I assure you that Commissioner Sankey looked at a lot of different options trying to make this work. Changing the schedule in midstream is extremely hard.

"I do think, obviously, unfortunately now that this situation has happened, there'll be a lot of conversation on how to prevent it from happening again. I think the lines of authority will be much clearer."