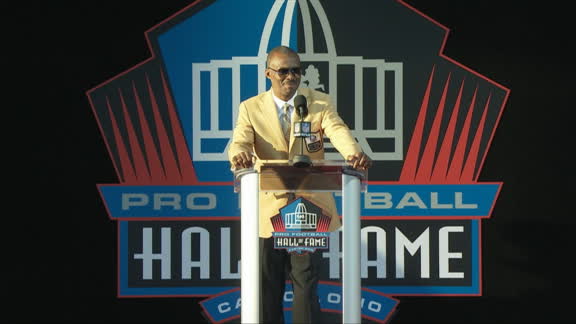 CANTON, Ohio - Former Indianapolis Colts receiver Marvin Harrison kicked off the 2016 Pro Football Hall of Fame by being the first speaker on Saturday.

Harrison spent his entire 13-year career with the Colts where he compiled 1,102 receptions, 14,580 yards and 128 touchdowns. Harrison's NFL-record 143 catches, which he set in the 2002 stands, still stands today.

Like Harrison, Pace played 13 years in the NFL, 12 with the Rams and one with the Chicago Bears. The Rams had seven 1,000-yard rushing seasons with the Pace, who was selected to the Pro Bowl for seven straight seasons from 2000-2006. Pace and the Rams won Super Bowl XXXVI.

Stanfel was a four-time Pro Bowler while playing with the Detroit Lions and the Washington Redskins during a career that spanned from 1952-1958. He was the offensive line coach for the Chicago Bears when they won Super Bowl XX.

Dungy coached the Tampa Bay Buccaneers and the Colts. Dungy led the Colts and Buccaneers to the playoffs in 11 of his 13 seasons coaching those teams. The Colts won at least 10 games in all seven seasons under Dungy. They won five division titles during that span, and Dungy became the first African-American head coach to win a Super Bowl.

Greene recorded at least 10 sacks in 10 of his 15 seasons, including at least 14 sacks five times. He was named to Pro Bowl five times - twice with Pittsburgh and Carolina and once with the Rams.

Stabler quarterbacked the Oakland Raiders to the AFC title game each season form 1973-77. His 59.85 completion percentage was second all-time at the time of his retirement in 1984. Stabler was 12-of-19 for 180 yards and a touchdown with no interceptions in the Raiders 32-14 victory over the Minnesota Vikings in Super Bowl XI. Stabler and Steve Young are the only left-handed quarterbacks to start and win a Super Bowl.

DeBartolo Jr. played an instrumental part in turning the 49ers from being one of the worst teams to one of the best teams on a regular basis. He hired Bill Walsh as coach and drafted Hall-of-Fame quarterback Joe Montana. The 49ers, won five Super Bowls with DeBartolo Jr. as owner, also had players like Young and safety Ronnie Lott. The 49ers won an average of 13 games from 1981-1998.