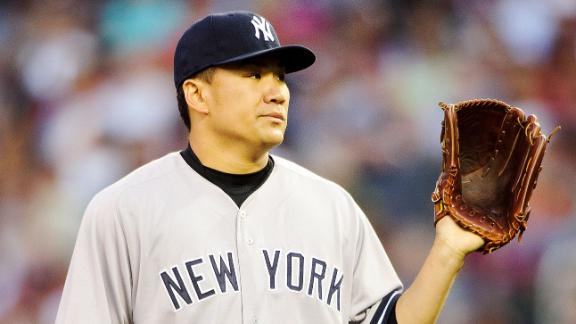 BOSTON -- Monday will be one of the most important days of the season for the New York Yankees playoff hopes, and not just because they're facing defending AL Cy Young Award winner Max Scherzer and the Detroit Tigers.

It's because earlier in the day, Masahiro Tanaka, their fallen ace, will test out his injured right elbow for the first time since he received a platelet-rich plasma injection on July 14 in the hope that he could avoid Tommy John surgery for a partially torn ulnar collateral ligament. According to a source in the Yankees clubhouse, it has already been decided that Tanaka will play catch on the field at Yankee Stadium.

Joe Girardi, as is his nature, refused to commit to a Tanaka throwing session by saying cryptically, "Catch or no catch. Those are the options."

But he did acknowledge Tanaka had seen the Yankee doctors on Friday and that, barring a setback Monday morning, was likely to pick up a baseball for the first time since July 8, when he was knocked out of a game for the first time in his brief but stellar big league career as he allowed five runs, including two home runs, in 6 2/3 innings against the Indians in Cleveland.

"We'll see tomorrow what everyone wants to do with him, but as we said, three weeks is the mark," Girardi said before Sunday night's game between the Yankees and the Boston Red Sox at Fenway Park. "[He told] his doctor he feels good, so we'll see what we do. We'll get home and talk and decide what we're going to do."

Even if Tanaka's game of catch goes well, Girardi said it was unlikely the Yankees would get him back before September, as previously noted by general manager Brian Cashman. Assuming Tanaka is well enough to begin rehabbing, Girardi said he would probably need less than a full six-week spring training before returning to action.

"I'm not exactly sure how we would do that," Girardi said. "It's not starting all over because he's been built up. But it'll be probably [throwing] 60 feet, and then 60 and 90, and 90 and 120, then flat ground and bullpen and probably a rehab game."

If all goes well, the Yankees could have both Tanaka and Michael Pineda, who had an outstanding start to the season before he was suspended for 10 days for using pine tar on the ball in a game against the Red Sox at Fenway on April 23 and then suffered a back muscle strain that has kept him on the disabled list ever since. Pineda started a minor league game on Sunday for the Yankees' AAA Scranton affiliate and worked 3 1/3 scoreless innings in which he allowed three hits, walked one and struck out four. He threw 58 pitches.

Girardi said the workload for Pineda would increase to 75 pitches his next outing and 90 pitches for the outing following that, after which, theoretically, he would be built up enough to return to the Yankees' starting rotation. Barring further setbacks, a normal five-day schedule would put his earliest possible return around August 19, when the Yankees begin a homestand with a three-game series against the Houston Astros.

"He was letting it go free and easy with no issues. So that's real encouraging," Girardi said of Pineda. "We're pleased with the progress that he's making, and we'll take it step by step."

David Phelps, who started the Yankees' 8-7 Sunday night win over the Red Sox, left after just 2 innings due to right elbow inflammation. He will be evaluated further in New York this week.