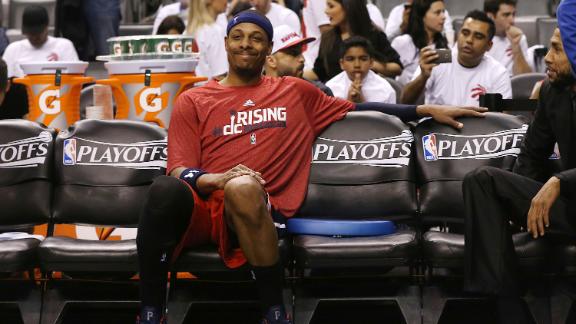 NEW YORK -- Toronto Raptors general manager Masai Ujiri was fined $35,000 and the team docked $25,000 by the NBA on Sunday for his expletive Saturday talking about Washington Wizards forward Paul Pierce when addressing fans before the teams' playoff opener.

"People want me to say something about Paul Pierce, but we don't give a s--- about 'it,'" Ujiri told a cheering crowd outside the Air Canada Centre in an area dubbed Jurassic Park.


Ujiri was referring to the Wizards veteran, who told ESPN he wasn't worried about the Raptors because "I don't feel they have the 'it' that makes you worried."


Pierce later clarified his comment by saying he meant the Raptors didn't have a superstar who could take over a game.


In a statement, Ujiri apologized for this outburst.


""I have the deepest respect for Commissioner [Adam] Silver and the NBA, and while showing passion for our team and fans I will choose my words more carefully in the future so as not to indicate otherwise," Ujiri said.


On Sunday, Raptors players said they want to move past the focus on Pierce as they prepare for Game 2 on Tuesday.


"If we keep talking about Paul Pierce, this is going to be a Paul Pierce series, not the Wizards," Raptors guard Greivis Vasquez said. "What he's doing is motivating his team, talking trash, so why would we talk trash? We don't have any trash talkers in our locker room."


Silver attended the Raptors' overtime loss in Game 1 of the first-round playoff series. Hetold Canadian broadcaster TSN that Ujiri's comments were "not appropriate."


"Typical Ujiri," Pierce said after the game. "You heard what he said last year when I was in Brooklyn. I could really care less. I think I can play the psychological war a little better than him."


Last year, Ujiri was fined $25,000 by the NBA for ending a speech with an expletive before the team's postseason opener against the Brooklyn Nets.


The Associated Press and ESPN's Brian Windhorst contributed to this report.