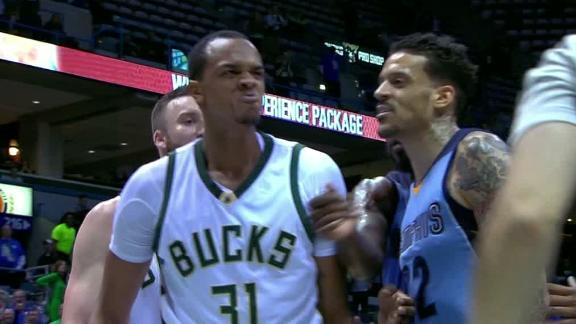 Barnes served the punishment Saturday night against the Los Angeles Clippers. The suspension will cost Barnes nearly $40,000 in salary.

Barnes and Henson were both ejected during the late stages of Milwaukee's 96-86 victory on Thursday at the Bradley Center. Henson blocked a Barnes shot with 5.5 seconds left in the game and was assessed two technical fouls for taunting, which resulted in his ejection. Barnes also received a technical foul as part of the incident and was ultimately ejected for a "continuing use of obscenities," according to the league's news release.

Barnes told the Los Angeles Times that he didn't try to get into the Bucks' locker room but was led astray by an arena worker.

"It's a tough deal," said Joerger, who is coaching through a rash of injuries, including to core players Marc Gasol, Zach Randolph and Mike Conleyandreserves Brandan Wright and Chris Andersen. "... You might agree or disagree, I'm not going to get into that."

Joerger said he would've liked to have known Friday night or Saturday morning, so that he could adjust his game plan to Barnes' absence. But, he added, it's paramount the league is thorough in such situations.

"I'm sure when you look into those kinds of situations, you ask 12 different people," he said. "I'm sure you get 11 or 12 different answers on what exactly went on."

In January, Barnes was suspended by the league for two games in the wake of a physical altercation with then-New York Knicks coach Derek Fisher. Fisher and Barnes were involved in a physical altercation on Oct. 3 during a party at the home of Barnes' ex-wife in Los Angeles. Barnes later told ESPN's Ramona Shelburne that he went to Gloria Govan's home that night to check on his 6-year-old twin sons after receiving text messages, using FaceTime with his sons and sensing they were uncomfortable. Barnes said one of the twins told him, "Mommy's friend Derek is here."

Barnes lives about 15 minutes from his family in Redondo Beach, California. He drove to the home, where the situation involving Barnes, Fisher and Govan escalated, and a physical altercation reportedly took place. Police were called, but no charges were filed.

One factor in Barnes' suspension, according to the league, was his continuing use of obscenities. Asked if he had heard of such reasoning, Joerger replied with a laugh: "Then I would have got thrown out."

ESPN Staff Writer Ian Begley and The Associated Press contributed to this report.