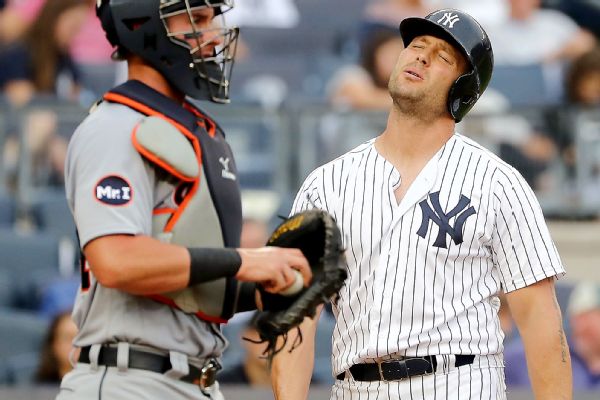 CLEVELAND -- New York Yankees designated hitter Matt Holliday was moved to the 10-day disabled list Sunday because of a lower back issue. It is the second time this year that the 37-year-old Holliday has been put on the list.

He has not been right since he returned from his first stint on the DL, which was the result of his contracting the Epstein-Barr virus. Since his return after the All-Star break, Holliday is just 11-for-81 (.136) with a home run and two doubles.

Manager Joe Girardi described Holliday's injury as a "tweak" in the lower side of his back. Girardi didn't seem to think it was serious but noted that back injuries require rest.

The Yankees have options to replace Holliday. They could choose to use catcher Gary Sanchezas a designated hitter more. Sanchez has struggled defensively all season. Girardi also mentioned that he could use his extra outfielders in the role.

Aaron Hicks, who was having a breakout season, is not ready to come off the DL yet. Hicks is working himself into shape in a minor league rehab stint.

"I don't think he's lost it in a month," Girardi said. "I just don't. I just think that he's off. Physically, he was unhealthy there for a little bit, and it seemed to kind of mess him up, and we haven't been able to get him back on track."