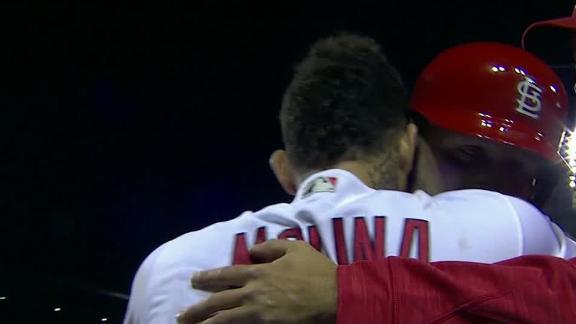 ST. LOUIS -- In what was billed as a largely ceremonial pinch-hitting appearance, Matt Holliday hit a home run Friday night.

The St. Louis Cardinals activated the outfielder before playing the Pittsburgh Pirates so that fans at Busch Stadium could bid the seven-time All-Star goodbye in one of the final three regular-season games.

Holliday was greeted with a loud standing ovation from an announced crowd of 43,070, but that was nothing compared to the greeting after he hit relieverZach Phillips' third pitch to him over the right-field wall. It was the first pinch-hit home run of Holliday's 13-year major league career.

Cardinals players also greeted Holliday with a standing ovation, and he was mobbed in the dugout before coming out for a curtain call.

"I still have chills," Cardinals manager Mike Matheny said. "To watch how the fans responded, we had a great crowd tonight, and every one of them made that extremely special for him. And how he responded, that's, yeah, amazing. Very special night."

General manager John Mozeliak said before the game that he spoke with Holliday earlier this week and informed him the odds of the team picking up his $17 million option for 2017 were "low."

"Most people who have options and they ask me in season, I simply tell them, 'Look, we'll deal with that when the time comes.' In his case, I feel he's earned the type of respect and had the type of career here that he had that right," Mozeliak said.

The Cardinals said Holliday was too emotional to meet with reporters before the game, but he released a statement through the team that read, in part: "It has been an honor to play in front of such great fans and for such a historic organization. I can honestly say it has been a dream come true. While I'm disappointed this could be it here in St. Louis, I understand that it might be time to move on."

Holliday, 36, expressed his "love and admiration" for Matheny, former manager Tony La Russa and the coaches with whom he worked.

"The most emotional part of this is my teammates and the relationships I've built with some of these guys over the years, particularly,Adam [Wainwright] and Yadi [Molina], to be considered part of the core with two of the finest human beings I've ever known," Holliday said.

Holliday had faced live pitching just once since he was hit by a pitch in July, which required surgery on his thumb.

"It's been tough for him because he wants to be back," Wainwright said. "Each time he went out and hit batting practice, his thumb would swell up, and nobody wants to have surgery and then have it swell up. I think he just wanted to get out there and play, help the team win. He's a great hitter, one of the best hitters of this generation. He's been a great Cardinal, but I know he did not want to sit on the bench and not get another at-bat here."

Matheny said he thinks Holliday wants to continue playing beyond this season. Holliday entered Friday batting .247, the lowest average of his career, but the home run Friday gave him 20 for the sixth time in his past seven seasons.

"I don't think there's a question about that, at least in conversations we've had," Matheny said.

The Cardinals acquired Holliday from the Oakland Athletics in 2009, then signed him to a seven-year, $120 million extension the following offseason. Over nearly 1,000 games with the Cardinals entering Friday, Holliday had collected a .292/.379/.493 line.

Once the Cardinals decline his option in November, he will get a $1 million buyout.

Holliday's extension is viewed as one of the few multiyear free-agent deals in which the player lived up to it throughout its length.

"Very rare, especially a deal of that length. I feel grateful," Mozeliak said. "As I mentioned, I've always admired him as a player, even before we traded for him, thought he was one of those gritty, hard-working individuals. But getting to know him, getting to see how he is as a person, I've gained tremendous respect for him."

Holliday homers on final at-bat as a Cardinal
St. Louis activates Matt Holliday, who was on the DL with a broken finger, to give him one last at-bat as a Cardinal and when he hits a home run, the stadium erupts.
Related topics:
sportsespnmlbcardsst louis cardinalsmatt holliday
Copyright © 2021 ESPN Internet Ventures. All rights reserved.
More Videos
From CNN Newsource affiliates
TOP STORIES