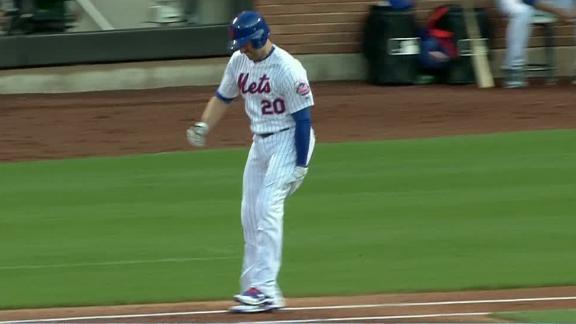 NEW YORK --Metssecond baseman Neil Walker injured his left leg on Wednesday night, the latest ailment to befall a New York team hampered by a long list of health problems over the past two seasons.

Walker tried to bunt for a hit in the third inning against the Chicago Cubs and appeared to have a good chance to beat it out before pulling up lame about halfway down the line. After hobbling a few more steps, he grabbed at the back of his left leg and collapsed to the ground.

Thrown out at first base but credited with a sacrifice, the switch-hitter eventually got up and walked off the field with a trainer and Mets manager Terry Collins.

"I'm concerned," Collins said after the Mets rallied for a 9-4 victory.

Lucas Duda entered in the fourth inning at first base, with T.J. Rivera shifting from first to second.

A couple of innings later, the Mets announced that Walker has a left leg injury and will have an MRI on Thursday.

The injury occurred one night after his double-play partner Asdrubal Cabrera went on the 10-day disabled list with a sprained left thumb.

In his second season with the Mets, Walker is batting .270 with nine homers and 33 RBIs.

Walker matched his career high with 23 home runs during a solid 2016 season that ended in late August because of a back injury. He had surgery in September.

In other injury-related news, the Mets' former ace,Matt Harvey, plans to see a doctor on Thursday after giving up three home runs in four innings on Wednesday.

Left-hander Josh Smoker was placed on the 10-day disabled list with a strained left shoulder, and right-hander Rafael Montero was recalled from Triple-A Las Vegas. Smoker threw 81 pitches in long relief on Tuesday night -- 33 more than his previous career high in the majors.

Mets outfielder Michael Conforto (stiff back) was held out of the starting lineup for the third consecutive night but said he felt great.

"It tightened up a few days ago, and I think we're pretty sensitive to those kinds of things lately," Conforto said. "We're just being really cautious."

Conforto struck out as a pinch hitter in the sixth.

"I think what [Collins] really wants is for me to be 100 percent for this weekend," Conforto said.

Mets slugger Yoenis Cespedes received a scheduled rest on Wednesday, but he is expected to start the next three games against theNationals, Collins said. Cespedes, who recently returned from a strained hamstring, singled as a pinch hitter in the eighth and was immediately removed for a pinch runner.