Mets newcomer Jed Lowrie ready to play all over the diamond 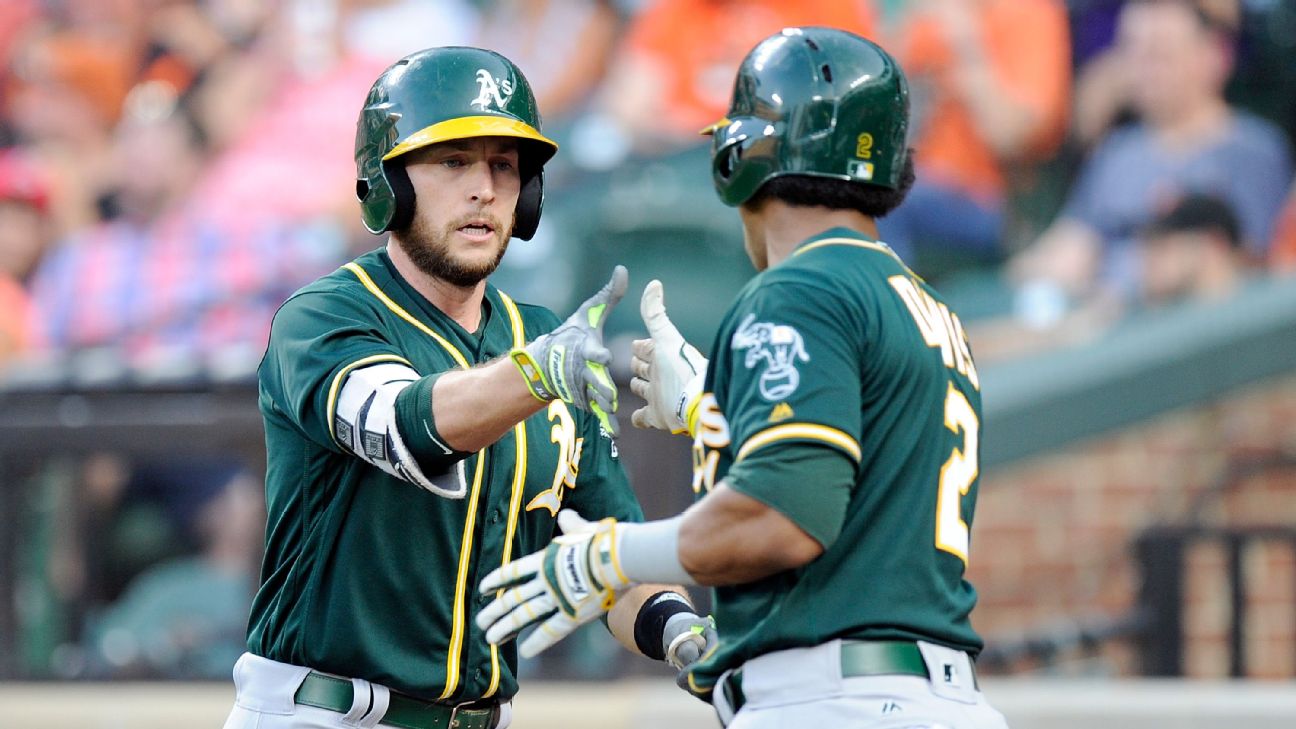 NEW YORK -- Jed Lowrie would rather talk about wine than whine.

The infielder visited Citi Field on Wednesday after finalizing a two-year, $20 million contract with the New York Mets, likely less money and a shorter term than he would have gotten before the free-agent market for solid-but-less-than-stellar veterans buckled a year ago.

"I think that argument could be made," he said. "But you deal in reality, and so I'm excited to be a Met."

A switch-hitter who turns 35 in April, Lowrie and is coming off his first All-Star appearance. In his 11th major league season, Lowrie set career highs last year for Oakland with 23 homers, 99 RBI, 78 walks and 128 strikeouts, hitting .267.

"He's a big wine connoisseur. He gets better with age like many of the wines that he collects," said new Mets general manager Brodie Van Wagenen, Lowrie's former agent.

Lowrie, wife Milessa, daughter Saige and son Miles likely will live in New York City, possibly in Brooklyn. They have homes in Houston and his hometown of Salem, Oregon, where he keeps his wine collection of several hundred bottles.

"Mostly reds. I've got California. I've got a lot of good Oregon pinot noir," he said. "Got some whites for my wife. Not a lot -- some French."

Lowrie spent the last three years as a second baseman but played all around the infield before that. Van Wagenen plans for him to back up 36-year-old second baseman Robinson Cano, 23-year-old shortstop Amed Rosario and third baseman Todd Frazier, who turns 33 next month. Rookie Peter Alonso, Frazier, J.D. Davis and Dominic Smith are possibilities at first.

"We have a veteran club and we want to make sure that we're not overtaxing the players that we have," Van Wagenen said. "We don't want to feel like anybody has the need to play 162 games, but if we can manage the workload to get the maximum performance out of each guy, there's more than enough playing to play time to go around."

Lowrie likely will hit second in the order behind right fielder Brandon Nimmo and ahead of Cano.

"He's going to be in our lineup virtually every day," Van Wagenen said. "We've talked a lot about this offseason of making sure that we are covered in the event that the inevitable adversity happens to our club."

Playing a lot could pay off for Lowrie as well. Hecan earn a $500,000 performance bonus during each season of his deal if he makes 550 plate appearances.He would get a $500,000 assignment bonus each time he is traded and also can earn award bonuses.

Lowrie will wear No. 4 with the Mets. He was No. 8 on the Athletics, but the Mets have not given out that number since 2001 and seem likely to retire it in honor of Gary Carter.

In signing with New York, Lowrie said he is willing to move around the infield.

"If you look at look at a lot of teams that have had recent success, they're very deep, and I think that's what it takes to win at the major league level at this point," he said.

Van Wagenen has been reshaping the Mets roster, acquiring Cano, closer Edwin Diaz and catcher Wilson Ramos and reacquiring reliever Jeurys Familia. Jeff McNeil will see time in the outfield, and Keon Broxton was obtained to back up Juan Lagares in center.

While making these moves, Van Wagenen reads his Twitter feed "every day throughout the day" and is aware Mets fans are clamoring for a big-name acquisition such as Bryce Harper or Manny Machado.

"I'm really happy that this fan base is not apathetic, and some of their ideas make more sense than others," Van Wagenen said. "But they're all interesting content, for sure."

He thinks the Mets are in position to win the NL East and return to the playoffs for the first time since 2016.