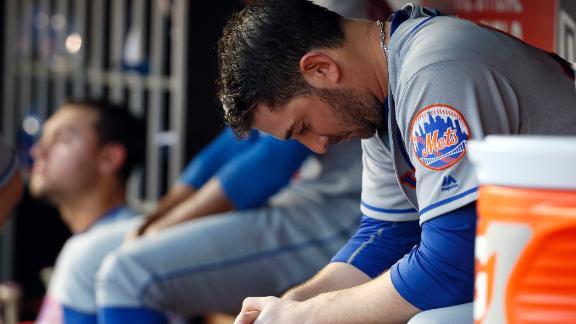 WASHINGTON -- New York Mets right-hander Matt Harvey successfully lobbied to make Tuesday's start against the Washington Nationals. After another flop, Harvey now might have run out of chances to work out his kinks while remaining in the rotation.

Harvey's ERA swelled to 6.08 after he allowed five runs on eight hits and two walks in five innings in the Mets' 7-4 loss at Nationals Park.

Afterward, Harvey bolted from the clubhouse without speaking to reporters.

Mets manager Terry Collins acknowledged serious consideration needs to be given to at least temporarily bouncing Harvey from the rotation. A team official said it was too early to know whether Harvey would be sent to the minors, placed on the disabled list or reassigned to a non-starting role at the major league level.

Collins indicated that he will discuss the matter with general manager Sandy Alderson and pitching coach Dan Warthen on Wednesday. Harvey's next scheduled turn is Monday against the Chicago White Sox at Citi Field.

"Right now we've got to think what's not just best for Matt, but what's best for us moving forward at the moment," Collins said. "There's a lot of things to consider. That's why we're not going to make any rash judgments tonight. We're going to sleep on it and talk about it tomorrow."

Harvey had convinced team officials to allow him to make Tuesday's start, despite allowing a career-high nine runs in a career-low 2 innings against the Nationals on Thursday at Citi Field -- and despite again matching up against Stephen Strasburg.

"I'm really surprised," Collins said. "This guy is too good. He's just way too good to continue like this."

As catcher Kevin Plaweckisaid,"He's a competitor and wants to do well and hasn't really gone through a tough stretch like this before. So it's somewhat new to him."

In Tuesday's rematch, Harvey surrendered a career-high 20 total bases before departing. Of the 90 pitchers to make at least nine starts this season, he is one of four to fail to reach the seventh inning at least once. The others areMichael Pineda, Wily Peralta and Shelby Miller.

The Mets had implored Harvey to fire his fastball more forcefully on Tuesday than in previous starts. And Harvey actually had his best velocity of the season in the early innings, registering as high as 96 mph with his fastball. But he missed on changeups to Zimmerman and Rendon, who belted consecutive solo homers in the fourth. And his velocity dipped and he had a "different" delivery, according to Collins, while allowing three runs in the fifth.

Collins suggested that having Harvey throw a 65-pitch simulated game between starts at Citi Field on Saturday to try to remedy his flaws might have cost him fatigue-wise in the middle innings. However, that would not explain the season-long pattern of fading in the middle of outings.

If it's any consolation to the Mets' coaches and front-office staff, Harvey's 2016 stats through May 24 (6.07 ERA, 1.69 WHIP, .330 opponent BA) closely match Strasburg's numbers through the same point last season (6.50 ERA, 1.69 WHIP, .321 opponent BA). Strasburg went on to produce a 1.84 ERA the remainder of the 2015 season. Of course, Strasburg was dealing with a neck issue during the height of his struggles last season, whereas Harvey has not disclosed any ailment that would explain his poor performance.

Collins continues to harp on Harvey throwing 216 innings last season as a possible explanation for his struggles. That was the most innings ever thrown by a major league pitcher in his first season back from Tommy John surgery, and Harvey could be dealing with a productivity hangover.

"My experience says it takes a little time and it'll come back," Collins said. "He's just got to keep working at it and not get frustrated with some things."

Collins sticking by Harvey
Despite his recent struggles, Mets manager Terry Collins tells reporters he's not giving up on Matt Harvey and is confident he can return to his dominant form.