Miesha Tate retires after loss to Raquel Pennington at UFC 205 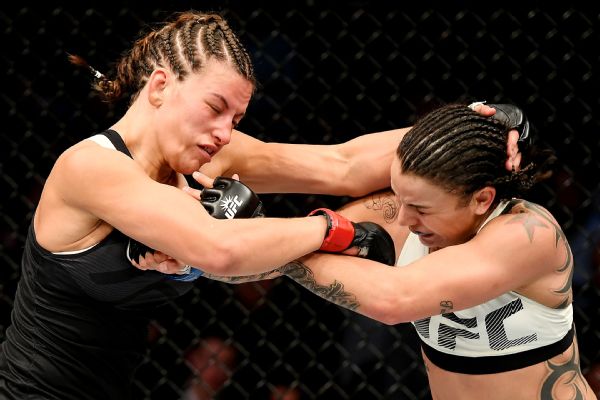 Pennington outboxed Tate and controlled position on the floor and along the fence. Outside a few knees and some very limited grappling success early, Tate had trouble getting anything going. The former Strikeforce and UFC champion admitted, "It's not my time anymore."

Asked why she was retiring, Tate said, "Because of the result. I just had a lot more to give and I couldn't pull it out of myself. It's been a long time; I've taken a lot of punishment.

Tate enjoyed the biggest win of her career earlier this year, when she submitted Holly Holm in the final round of a UFC championship fight in March. She followed that with a disappointing, first-round submission loss to Amanda Nunes at UFC 200 in July. Tate suffered a broken nose in that bout.

On Saturday, she appeared to realize early she couldn't win a boxing match and consistently punched her way into the clinch. She didn't fare much better there, however, as Pennington turned her into the fence and hit her with short shots.

Tate grew desperate enough to pull guard at the start of the third round. She tried to hit armbars and triangles from there, but Pennington easily worked out of them and scored with punches from the top. All three judges scored the fight for Pennington: 30-27, 30-27, 29-28.

"She is an idol to me and needs to keep her head up," Pennington said of Tate. "Everybody talks about how Ronda [Rousey] is the face of women's MMA. I think that Miesha is right there with her."

Fighting out of Colorado Springs, Colorado, Pennington has quietly won her last four fights. Her last loss came via decision to Holm in February 2015; Pennington still believes she actually won that fight.

Born in Washington and fighting out of Las Vegas, Tate has been one of the most popular female fighters ever. She fought former UFC and Strikeforce champion Ronda Rousey twice, in 2012 and '13, losing both times by armbar. After the second loss, Tate fought her way back to a title with four straight wins.

Tate publicly contemplated retirement last year when the UFC skipped over a promised title shot in order to book a fight between then-champion Rousey and Holm.

Tate retires after loss to Pennington
In their bantamwright fight, Miesha Tate falls to Raquel Pennington by unanimous decision and immediately announces her retirement.