Mike Keenan's career is marked by controversy, but his Hall of Fame credentials are impeccable 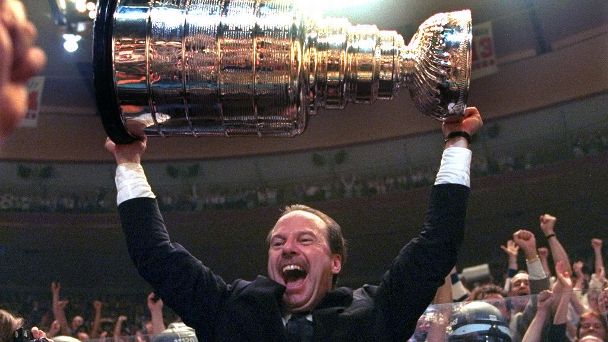 Is Mike Keenan a Hall of Famer?

Greg Wyshynski: The Hockey Hall of Fame selection process is rife with politics and personal agendas, and that's never more apparent than in the enshrinement of coaches through the "builder" category.

You have some coaches who make the cut based on undeniable merit, such as Scotty Bowman (1,244 career wins) and Al Arbour (782 wins), while others get in based on more nebulous criteria. Roger Neilson (460 wins) never won a Stanley Cup or a Jack Adams Award, but was a well-liked innovator who was battling cancer when he was inducted. Herb Brooks (219 wins) was elected on the strength of the Miracle on Ice Olympic gold medal in 1980, and was inducted three years after a car accident took his life.

Keenan is ninth in NHL career wins with 672. He won the Jack Adams in 1984-85, won four conference titles and, of course, the Stanley Cup in 1994 with the New York Rangers. So he has the numbers and the merit -- there aren't many non-dynastic coaches who can boast four conference titles in their careers. He also has that nebulous "something" the separates him from the pack: leading an Original Six team to its first Stanley Cup in 54 years.

Of course, he then left the Rangers after that season because of a conflict he had with GM Neil Smith. Then Keenan bounced from St. Louis to Vancouver to Boston to Florida to Calgary to the KHL, where he was just fired early in the season from the Kunlun Red Star. Throughout that journey, Keenan burned more bridges than a welder and made his share of enemies.

So, to circle back to my initial thought: The Hockey Hall of Fame selection process is rife with politics and personal agendas. And while he's utterly qualified to be a Hall of Fame coach, one wonders if Keenan kissed the right backsides instead of kicking them. So I'm not entirely sure he gets in. What do you think?

Emily Kaplan: I love a good Keenan anecdote, and my favorite might be from a 1995 Sports Illustrated profile of the famously ornery coach. The story begins with Keenan saying: "No one who has ever written about me has a f------ clue who I am." He then offers the author, Gary Smith, a copy of "The Great Gatsby," and says: "It's much more complicated than anyone really thinks."

Well, the same could be said about Keenan's Hall of Fame candidacy. Keenan helped build a lot of teams and win a lot of games. He guided a marquee franchise (the Rangers) through a lengthy a Stanley Cup drought. Keenan is also just as known for his unceremonious exits, however, often leaving bitter resentment in his wake. He has reached the Stanley Cup Final four times and has coached eight NHL teams.

Will the committee be impressed by his scope or deterred by his impermanence? The entire Hall of Fame process is rooted in cloak-and-dagger practices. The criteria, specifically for coaches, can be murky. That's because there's no specific coaches wing, just the all-encompassing builder category that is described as: "coaching, managerial or executive ability, or ability in another significant off-ice role, sportsmanship, character and contributions to his or her organization or organizations and to the game of hockey in general."

That's quite the collection of intangibles. Keenan ranks ninth in career coaching wins, with 672. The four guys above him who aren't active in the league (Bowman, Arbour, Dick Irvin and Pat Quinn) all have been inducted. But Keenan also ranks 32nd for all-time winning percentage (.555), which isn't as convincing. I think it comes down to Keenan's impact on the game, and there's no question he has had one. My gut feeling is that he deserves to be a Hall of Famer. Maybe his case isn't as complicated as a book we were required to read in high school.

Chris Peters:Emily brings up some good points, and while I think it makes Keenan a strong candidate, I don't know that he gets in on his NHL tenure alone. In recent years, however, the committee has allowed itself to step outside of the NHL bubble when it comes to builders and players to make sure that the Hockey Hall of Fame remains less a shrine to the NHL specifically and one that honors the game as a whole. For instance, longtime Canadian university coach Clare Drake, whose NHL tenure begins and ends with a two-year stint as an assistant coach with the Winnipeg Jets, was just inducted. Looking at the whole of Keenan's career makes for a much stronger case, as it might be one of the most unique runs in coaching by anyone anywhere, with plenty of success along the way.

First off, Keenan's career in coaching spans 40 years -- or at least 39 after his ouster at Kunlun. While we know of his one Stanley Cup and three other tries as a runner-up, he has earned many titles in his career as a coach. Iron Mike is the only coach to have won championships in both the NHL and the KHL, as he led Metallurg to the Gagarin Cup 20 years after the Rangers' memorable run. Throw in winning the AHL's Calder Cup in 1983, and Keenan has titles in the three most prominent professional leagues in hockey.

He also won three championships in junior hockey, including with the Peterborough Petes in the precursor to what is now known as the OHL back in 1980. Keenan also won a Canadian university title with the University of Toronto in 1984. The hardware that may resonate most with the committee outside of the Stanley Cup is the two Canada Cups he won as Canada's head coach. That includes the 1987 tournament, which is remembered for perhaps the greatest collection of talent in the history of international hockey. Keenan got to coach a Canadian side that included both Wayne Gretzky and Mario Lemieux. You'll say anyone can win with those guys, and you're right, but the fact that Keenan was chosen to be the man to do it says a lot. There are also a lot of great Keenan stories from that tournament as well, like a near player rebellion. (Hat tip to eliteprospects.com for the coaching rundown.)