MLS is Back Tournament lessons so far: Bubble holding up; Atlanta, Galaxy and Red Bulls on the slide 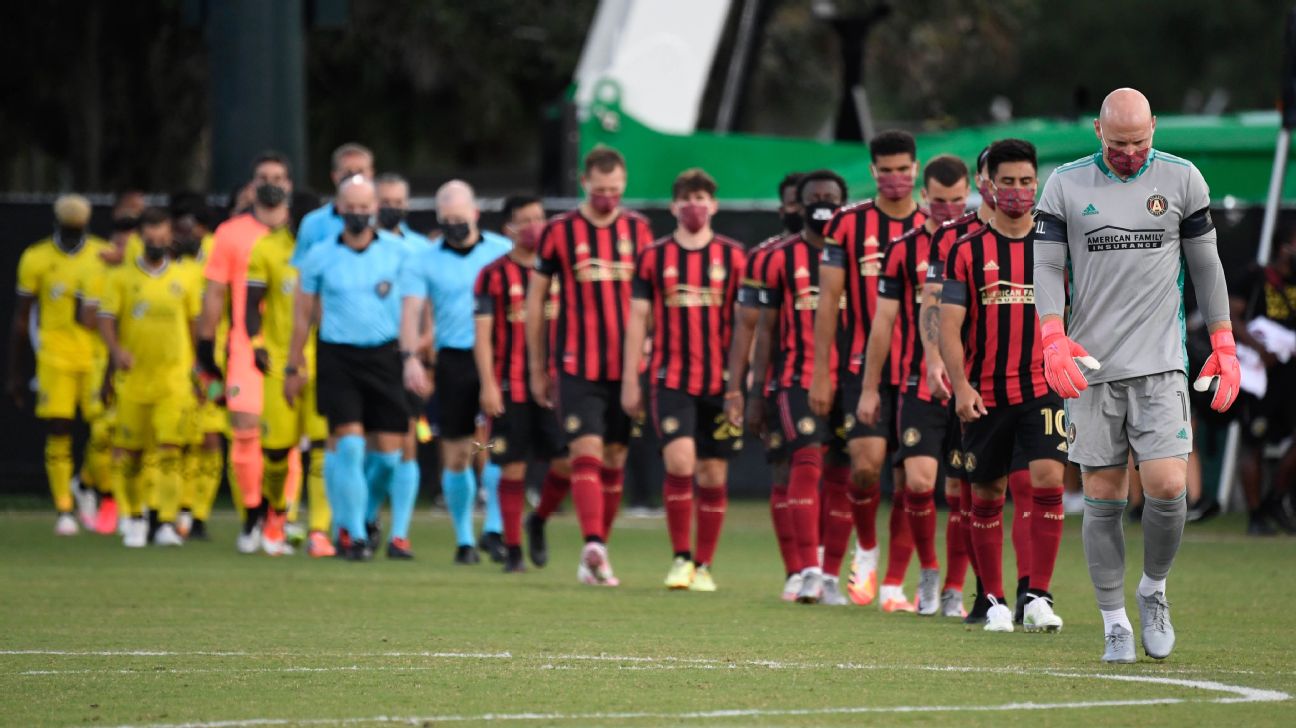 The group stage for the MLS is Back Tournament has concluded, and it was every bit as wild as one would expect considering the league was coming back from a four-month hiatus. There were dramatic finishes, head-shaking gaffes and some upsets as well.

There's always a risk of taking too much away from a three-game stretch for these teams, all of it played in brutally hot and humid conditions at the ESPN Wide World of Sports Complex in Florida. But there were some lessons to be gleaned from a group stage that was like a train wreck -- you didn't dare look away.

The fact that the tournament made it through the group stage counts as an accomplishment for MLS. When FC Dallas and Nashville SC had to withdraw from the tournament due to clusters of positive tests for COVID-19, there were legitimate concerns about whether the competition would continue. Since that decision, the bubble has held firm with no confirmed new positive tests in the past two weeks for the remaining teams, dating back to July 10.

While that counts as excellent news, it's still too early to declare victory. Following the round of 16, the eight remaining teams will move into the Dolphin Hotel, according to sources with knowledge of the situation. The Swan Hotel will be opening to the public after July 29, though all MLS operations will have moved by then. That last detail would seem to add a variable in terms of keeping things secure, but to the credit of MLS protocols, matters seem to be going well for now.

-Stream MLS is Back LIVE on ESPN networks and the ESPN app (U.S. only)

- MLS is Back Tournament group standings

MLS has long been a league where it benefits to expect the unexpected. With the players stepping onto the field for their first competitive matches since early March, there was bound to be some rust and unpredictability.

In that respect, the tournament has exceeded expectations. There has been plenty of late drama, with ESPN television analyst Taylor Twellman reporting that 9% of the goals in the MLS is Back Tournament have been scored in stoppage time. If that holds up, it would be the highest percentage in the league's history.


The teams that have excelled or flamed out have sparked some double takes as well, even when you take into account that the tournament format sees 16 of the 24 teams make it to the knockout rounds. Presumed powers Atlanta United, the New York Red Bulls and the LA Galaxy (more on them later) were among the teams eliminated at the first hurdle. Meanwhile the likes of the Vancouver Whitecaps and FC Cincinnati progressed, while the San Jose Earthquakes -- chaos personified -- and Orlando City SC each won their group. Portland were a mild surprise in beating LAFC for the top spot in Group F, but the Timbers have been worthy winners in their first two matches and picked up a creditable 2-2 draw against Bob Bradley's side on Thursday night.

Given the inherent unpredictability of knockout round soccer, the drama looks set to continue.

It seems for years now that when it came to acquiring attacking talent, the league has cast its collective eye abroad. In a global market, that makes perfect sense, and in 2020 the approach continued for some teams. The Columbus Crew spent $7 million on Lucas Zelarayan, while D.C. United forked out $5 million for Edison Flores. Then there was the big one, with the LA Galaxy spending $9.4 million to acquire Mexico's Javier "Chicharito" Hernandez.

But the MLS is Back Tournament has seen some American players step up. Toronto FC's Ayo Akinola is tied for tournament top scorer (alongside LAFC's Diego Rossi) with five goals, while Orlando City's Chris Mueller has chipped in with three.

Philadelphia's Brenden Aaronson has continued his role as one of the key cogs in the Union's attack. Memo Rodriguez has settled into a more central role in the Houston Dynamo's midfield, while Ethan Finlay's two goals for Minnesota United against the Colorado Rapids hint that he is getting back to his best after dealing with injuries. Portland's Jeremy Ebobisse has looked sharp as well in his bid to fend off a pair of winter acquisitions in Jaroslaw Niezgoda and Felipe Mora.

Can this group sustain the success? That is often the big question, and Chicago Fire playmaker Djordje Mihailovic seems to have fallen out of favor, but the signs from this tournament remain encouraging.

4. Depth has been tested

In the wake of the worldwide COVID-19 pandemic and subsequent shutdown of soccer leagues across the globe, the International Football Association Board -- which oversees the Laws of the Game -- agreed to allow two more subs per game. Now managers have considerably more wiggle room in making changes that can have an impact, and those teams with depth have an advantage. The additional subs also help explain the aforementioned increase in late goals, though the fitness of teams has played a part as well.

The rule's impact was illustrated during the San Jose Earthquakes' wild 4-3 win over the Vancouver Whitecaps on July 15. With the Quakes trailing 3-1, manager Matias Almeyda made a triple substitution in a bid to rescue the situation. It worked to perfection, with two of those subs -- the ageless Chris Wondolowski and Shea Salinas -- scoring to give San Jose a dramatic win.


Injuries have also played a part in revealing which teams are deepest. Reigning league MVP Carlos Vela didn't take part in the tournament, and Adama Diomande has been dealing with a foot injury, but that hasn't slowed down LAFC's warp-speed attack. Rossi has done plenty to pick up the slack, Bradley Wright-Phillips has shown he still has plenty left to give, and Brian Rodriguez stepped up for his first league goal.

Columbus has also held up well, with the Crew looking sharp despite injuries to goalkeeper Eloy Room and defender Vito Wormgoor.

5. Atlanta, the Galaxy and the Red Bulls are on a downward slide

Sample sizes and all that, but there are still plenty of questions surrounding these teams for whenever the league resumes.

The LA Galaxy are suffering immensely, especially when compared to LAFC, who thrashed their crosstown rivals 6-2. The losses of both Jonathan dos Santos and Hernandez have cut especially deep, and while the expectation is that they will return later this season, it highlights just how much work remains to be done on this roster. Little has been done to shore up the Galaxy's defense, though the team's identity shouldn't crumble just because a few players are missing.

It's tough to know what to make of the Red Bulls. Their overall record is 2-2-1, so they're not in trouble, strictly speaking. But they just don't look the same as in years past, which is understandable when you lose former mainstays like Luis Robles, Wright-Phillips and Kemar Lawrence. There is still time for the Red Bulls to reestablish their identity, but at the moment they look like a team thrashing about to find form.

Then again, for the Galaxy and the Red Bulls, it could be worse. They could be Atlanta, who went goalless and pointless in Orlando -- and are now coachless after parting ways with Frank De Boer on Friday. Atlanta has struggled to maintain its lofty perch at the top of the MLS heap ever since Tata Martino departed following the MLS Cup triumph in 2018, so some of their struggles fell on successor De Boer. But the loss of players like Darlington Nagbe and Julian Gressel and Leandro Gonzalez Pirez, combined with Josef Martinez's knee injury, has compromised the balance of the squad, and the replacements have yet to reach the level of their predecessors.

De Boer wasn't able to turn it around turn it as Atlanta didn't look like a side that believed in what the Dutchman was preaching. 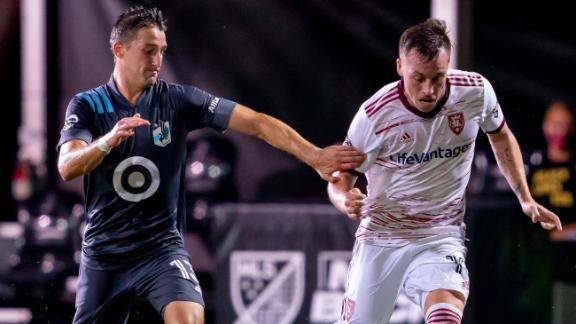 Onuoha: For some players MLS is like a hobby
Real Salt Lake defender Nedum Onouha discusses the pros and cons of promotion-relegation in football. 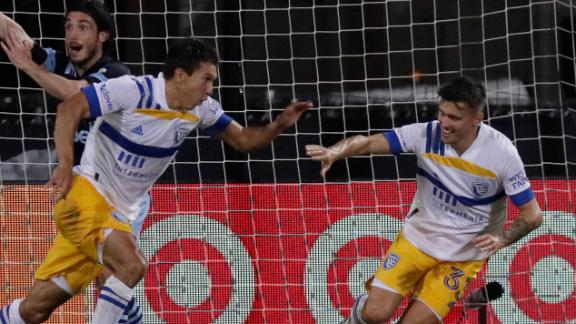 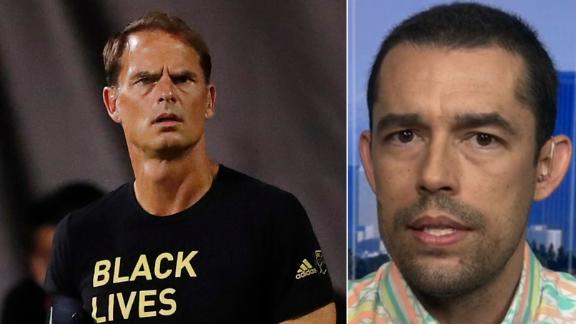