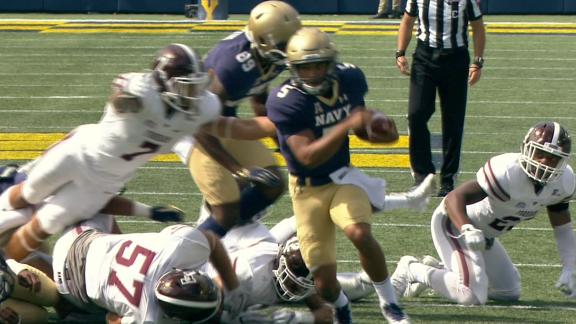 Playing quarterback at Navy isn't a job, but it's sometimes an adventure.

After starting quarterback Tago Smith injured his right knee in the first half of Saturday's 52-16 victory against FCS opponent Fordham, the Midshipmen pulled freshman Malcolm Perry out of the stands.

Perry, listed as the team's No. 4 quarterback after preseason camp, was wearing his uniform whites while sitting in the brigade at Navy-Marine Corps Memorial Stadium.

By the fourth quarter, Perry, from Clarksville, Tennessee, was playing in the game.

He ran for 32 yards on his first five carries in the Midshipmen's triple-option spread offense. He finished with 30 yards on seven rushing attempts, and he didn't throw a pass.

After Smith was injured, Navy's coaches decided to get Perry out of the stands. They also had to send someone to get his uniform, which was inside the team's locker room at the academy.

Navy officials said Perry didn't dress for the game because he was sick earlier this week, missing practices Monday, Tuesday and Wednesday. He returned to practice Thursday and played in the JV game against Louisburg Junior College of North Carolina on Friday.

Senior Will Worth took over the offense after Smith was hurt. Worth ran times for 22 yards with one touchdown and completed all three of his passes for 78 yards with one score.

The extent of Smith's injury wasn't immediately known. The senior from Fayetteville, Georgia, had waited the past three seasons to start while playing behind Keenan Reynolds. Smith ran 10 times for 97 yards with two touchdowns and completed his only pass attempt for 45 yards before he was hurt against Fordham.

Sophomore Zach Abey, who was the team's No. 3 quarterback, was suspended from playing in the game.