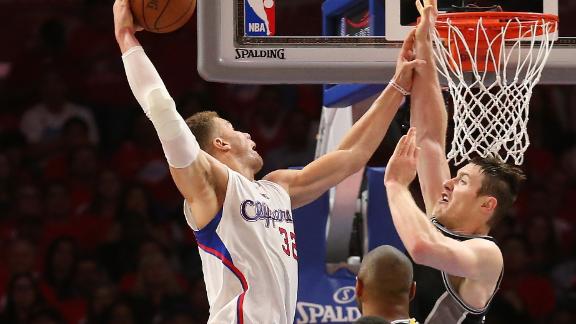 The NBA playoffs got off to a resounding start this weekend with every team in action. Our writers break down some of the highlights and lowlights:

1. What was the best thing about the first weekend?


J.A. Adande, ESPN.com: Derrick Rose's performance. I've always said the playoffs are about revelation and redemption. Now you can add restoration. Rose's 23 points matched the total in his last playoff game -- on April 28, 2012 -- only this time the result brought promise, not pain. To think of all the work and frustration he's been through these past three years made the moment he triumphantly came out Game 1 so poignant, while elevating the potential of the Bulls in these playoffs.


Amin Elhassan, ESPN Insider: Call me a sucker for theatrics, but the two Blake Griffin dunks over Aron Baynes got me out of my seat. Griffin's aerial acrobatics have grown more rare as his career has progressed, so for us to get two in one game was a special treat.

Marc Stein, ESPN.com: That Aron Baynes, bless him, kept trying to stop Blake Griffin from dunking Sunday night. Baynes never succeeded, but you can't have one (or more) epic posterization unless there's a defender stubborn enough to take on the dunker. We all won, except Baynes and the Spurs, because he was.


Brian Windhorst, ESPN.com: I found myself moved seeing Derrick Rose smiling to himself and then burying his head in a towel after finishing his first playoff game in three years. For some reason there has been a feeling that some of this has been Rose's fault, like these injuries have been a personal failing. Much of his suffering has been done in private, but this moment was public and it was genuinely uplifting, at least to me.


Royce Young, ESPN.com: Derrick Rose looked a whole lot like Derrick Rose. The bouncy athleticism was there, the rim attacks were there and the single-minded offensive aggressiveness was there. Six weeks ago, Rose's season seemed to be in danger of being over. Now, not only is he back, but he looked kind of like that guy who won an MVP and could lead the Bulls very deep into the postseason.


2. What was the biggest surprise of the weekend?


Adande: The Nets outscoring the Hawks over the final three quarters. In a weekend that yielded no upsets from the 6-8 seeds, at least the Nets managed to make it close against the Hawks. That's more than they could do in their previous visit to Atlanta, a 32-point blowout that was one of Brooklyn's four losses in its final seven games of the regular season. And if injuries to Atlanta's Al Horford and Paul Millsap linger, maybe this series will be closer and last longer than we expected.


Elhassan: Derrick Rose looked as consistently explosive as we've seen him all season long. The Bulls' offense didn't need his stellar play, but it definitely served as the knockout blow to Milwaukee in Game 1.


Stein: There were times in their respective series openers that the weight of the No. 1 seed, after 60-win seasons, was evident in both Golden State and Atlanta. It's a little too soon to suggest so-so performances in Game 1 mean anything, but it inevitably gets your attention when the Warriors hike the lead as high as 25 points in the third quarter and then fail to cruise to the finish in their usual manner.


Windhorst: Honestly, I wasn't really surprised by anything. Maybe the egg the Blazers dropped in Memphis and how much the Spurs struggled on offense. But almost everything that took place was either generally predictable or fit into typical Game 1 variance. There are plenty of players I'm expecting to bounce back from bad starts.


Young: The Spurs' little mistakes. We hold them to a higher standard because of who they are and what they've accomplished, but the open misses, the poor free throw shooting, the sloppy turnovers and inconsistent offense weren't very Spurs-like at all.


3. What was the biggest disappointment of the weekend?


Adande: The Toronto Raptors. The only home team to lose over the weekend. The Raptors shot 38 percent overall and 20 percent on 3-pointers. Their 2015 All-Star, Kyle Lowry, scored only seven points before fouling out. The way DeMar DeRozan and Terrence Ross shot you would have thought they made their playoff debuts Saturday, not last year. Now the Raptors will have to act like playoff veterans if they are to recover from losing home-court advantage in the series.


Elhassan: Dallas' insistence to stick with Rajon Rondo lineups, even as it was obvious Houston would not even entertain the thought of guarding him off the ball. He deep-sixes almost every Dallas lineup he appears in. I thought they'd figure out that it's time to bench him.


Stein: Toronto's stumbling start is up there, obviously, but Game 1 injuries are as disappointing as it gets. Although New Orleans is optimistic thatTyreke Evans--even if he's forced to miss Monday night's Game 2 -- will be back sooner rather than later in the Golden State series despite suffering a deep bone bruise in his knee in the opener, Al Horford's dislocated pinky on his shooting hand by contrast, is bound to have a bigger impact on how the East plays out.


Windhorst: The visiting teams. Just one "upset" in the Game 1s, if you can call the Wizards over the Raptors an upset. We'll see how many series are 1-1 after Wednesday night;, hopefully it's more than just one or two. But there aren't a lot of series that I immediately expect to be protracted at this point.


Young: The Nets, just in general. They were even pleasantly competitive in Game 1 against the Hawks, but it's hard to shake the lingering smell that the 38-44 boring Nets are in, and human electrical current Russell Westbrook is not.


4. What was the most promising thing you saw this weekend?


Adande: The Los Angeles Clippers. After so much je ne sais quoi during the regular season we might have seen the "quoi": the return of the aggressive, high-flying Blake Griffin. With higher stakes, he's expending more energy and taking more risks. And with fewer games per week, Doc Rivers can play his starters longer and minimize the self-inflicted damage from the bench. In their Game 1 victory over the Spurs, this team showed the template for how effective it can be in the playoffs.


Elhassan: Anthony Davis overcame his playoff debut jitters and made the second half of the Warriors-Pelicans game interesting. A glimpse of the future, when he'll dominate NBA Aprils, Mays and Junes for years to come.


Stein: For all of the understandable focus on the various big names making their playoff debuts -- Anthony Davis, Kyrie Irving, Kevin Love, Giannis Antetokounmpo, etc. -- Chicago and Houston have to be heartened by the flashes of top form they saw from Derrick Rose and Dwight Howard. It's somewhat hard to believe, even accounting for his horrendous run of injuries, that Saturday night's series opener with Milwaukee was D-Rose's first playoff game since the spring of 2012. And Howard, despite being plagued by foul trouble, had an unmistakable presence at the rim in the limited minutes those fouls had him on the floor for the Rockets, who will certainly need Dwight to do anything substantial in these playoffs.


Windhorst: I vividly remember LeBron James' first career playoff game when he put up a triple-double that promised many years of postseason greatness. I felt the same way about seeing Anthony Davis' big debut in Oakland. His team isn't there yet and this display is probably going to be just a cameo this year. But get ready for a lot of Davis in May and eventually June over the next decade.


Young: The Grizzlies are back. Entering the postseason, of all the contenders, the Grizzlies probably carried around the most questions. They had health issues, and were strangely up-and-down, especially against good teams. But both Mike Conley and Tony Allen were back and solid, and the rest of the team restored what made them so good the first three months.


Adande: Paul Pierce. No one else talked it and walked it to the extent Pierce did. His words had relevance in three series and he was the primary factor in the one in which he played, scoring a game-high 20 points in the Wizards' opening victory. He clarified that his "It" remarks were more a commentary on the state of today's NBA than a swipe at the Raptors. Then he provided the very thing he said is missing these days: a capital-M Man who absorbs the fans' hostility on the road and carries his team.

Elhassan: Hard to pick one, so I'll take one from both conferences: LeBron James in the East, Chris Paul in the West. Vintage performances.


Stein: I normally wouldn't pick someone from a team that lost its Game 1, but the way Anthony Davis owned Saturday afternoon's fourth quarter at Golden State left me no choice, particularly since (A) I was there to get swept up in the moment, and (B) it's not easy choosing between Chris Paul and Blake Griffin anyway. On the same floor where Golden State went 39-2 in the regular season with an average margin of nearly 15 points per game, The Brow uncorked 20 points in that final period and had the Warriors and their raucous fans legitimately worried down the stretch. Something they haven't felt at Oracle Arena in a long, long time.


Windhorst: Paul Pierce. He got the Raptors to curse, get fined and comment on his genitals, and he distracted all their fans by uttering two letters. Two! Then he pulled his real trick, playing his best game in two months. He was the only Wizard to deliver what passed for a good game and it was enough to go up 1-0 in the series. The master.


Young: Chris Paul. No player impacted a game quite like Paul did against the Spurs. He finished with 32 points on 20 shots, but played the kind of game that made it feel more like 50 on 20 shots. Every second-half shot he hit was dangerous and the way he completely controlled the half court, manipulating the Spurs' defense at will, was simply brilliant.

NBA Top Plays
Blake Griffin dunking on Aron Baynes is the top play in the NBA.