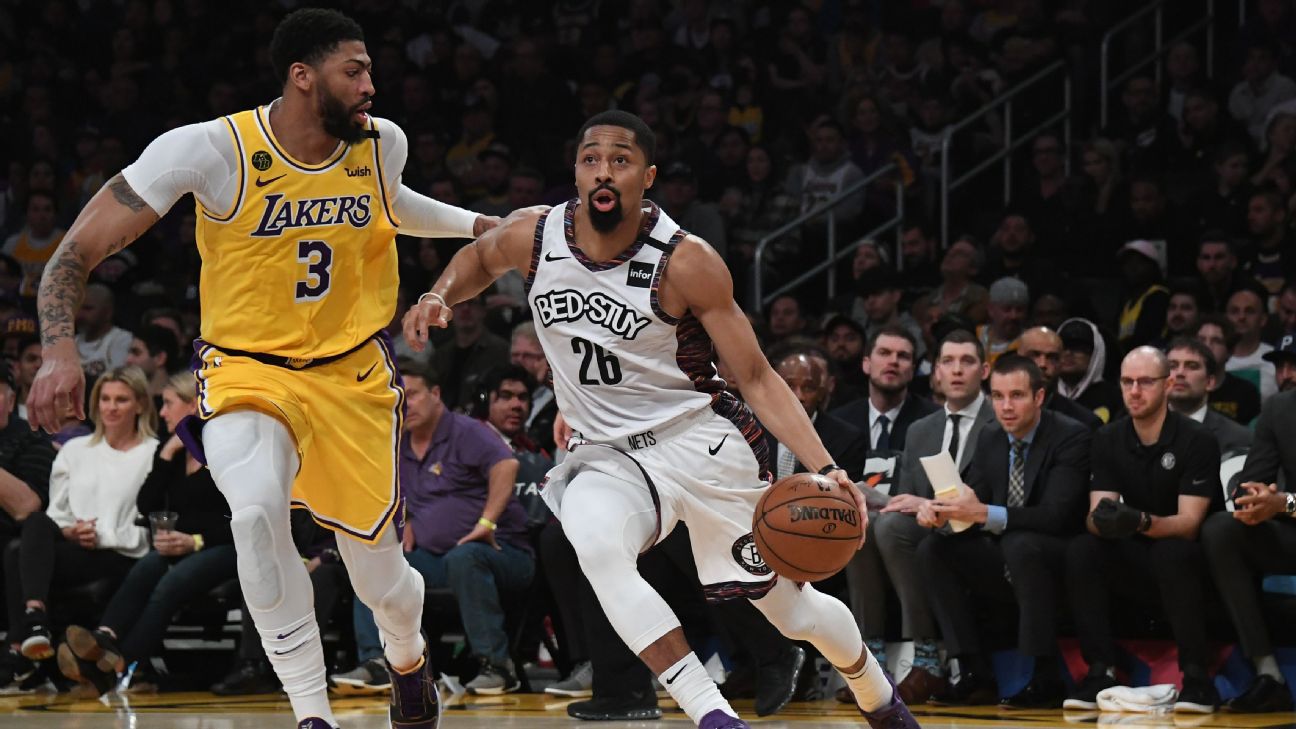 LOS ANGELES -- In a whirlwind 72 hours, the Brooklyn Nets saw their head coach change, were briefed on the league's new hyper-sanitary rules to help slow the spread of the coronavirus and made a cross-country trek.

Monday evening at Staples Center, playing in front a throng of fans for perhaps the last time for a while, the Nets defeated theLos Angeles Lakers104-102 behind 23 points from Spencer Dinwiddie and 22 points fromCaris LeVert.

"It's one of the biggest wins of the year," Nets guardTimothe Luwawu-Cabarrotsaid.

It came down to one shot.

With 5.1 seconds left in the game, "Welcome to the Jungle" blaring over the sound system and the Lakers down by two points, Danny Green inbounded the ball to LeBron James. Wilson Chandler, who had been defending James all night, crouched and forced the Lakers' star to his left. James dished the ball to an open and waiting Anthony Davis.

As the Nets' bench shouted at Davis andKevin Durant's face turned to stone, the ball left Davis' hands with less than one second left.

"It is like the joy and pain of basketball," said interim coach Jacque Vaughn, who coached his second game since the Nets announced that they "mutually agreed to part ways" with Atkinson on Saturday. "I had the perfect sight line. I see it leave. I am just watching the flight of it. And I looked to see if his feet were behind the line and said, 'That's a 3 ball. We're either losing this thing, or we're gonna win this thing.'"

The ball sailed, bounced on the rim and kissed the backboard before falling away.

By the end of the third quarter, the Nets had built a seven-point lead. Then the Lakers -- winners of 11 of their previous 12 games, including against the Milwaukee Bucks andLA Clippers-- surged back to tie the score on a Davis 3-pointer with just under a minute left.

James had a chance to give the Lakers the lead with 9.1 seconds left. He pounded his chest as if to say "this one is mine" before driving to the basket, but his layup attempt rimmed out. He finished the game just shy of a triple-double, with 29 points, 12 rebounds and 9 assists.

"There's possessions where we could've fought harder or executed better," Lakers coach Frank Vogel said. "But I just thought our intent, our desire to win this game and validate our weekend was at a high level. We just fell short."

Ultimately, the Nets won the game on an 18-foot pull-up jump shot from Dinwiddie that put them ahead with 28.8 seconds remaining.