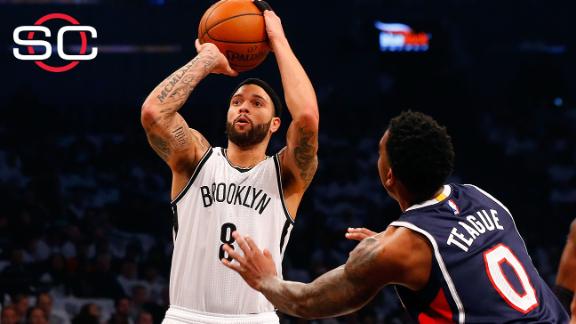 EAST RUTHERFORD, N.J. -- Brooklyn Nets general manager Billy King says the team will not buy out or use the stretch provision on the final two seasons of point guard Deron Williams' contract.

Asked about the possibility Wednesday, King responded, "No."

Williams is owed $21 million next season and $22.3 million in 2016-17, assuming he doesn't exercise his early termination option and opt out of the final year of his contract.

The stretch provision allows a team to waive a player and spread the remaining money owed on his contract over double the length of that contract plus one year.

So in Williams' case, the Nets could've paid out the remaining $43 million owed to him over five years instead of two, which would represent a fairly significant savings in the short term.

Williams averaged just 13 points and 6.6 assists per game last season while shooting a career-worst 38.7 percent from the field.

Much was made of the fact that both Williams and forward Joe Johnson's names were omitted in a letter to Nets season-ticket holders last week. Johnson is in the final year of his deal and owed $24.9 million next season.

"Within that letter, I think everyone made a big deal of that because we didn't mention Joe and Deron's name, but I think in doing so, we talked about Brook Lopez and Thaddeus Young, trying to retain them because they were free agents," King said.

"We talked about some of our younger guys because some of those guys we didn't know coming in how successful they'd be coming in the NBA. So I guess we were sort of saying, we know these guys can play in the league, and we weren't trying to slight Deron or Joe. We know what they have, what they bring to the table."

King said the team's goal is to avoid being a taxpayer, but that seems highly improbable, as he later admitted, given that the Nets want to keep both Lopez and Young.

King mentioned the possibility of making a trade to reduce salary. Johnson and backup point guard Jarrett Jack are among the candidates to possibly be moved.

King said the Nets are on the verge of reaching an agreement to have a D-League team again in the next couple of years. The plan is for the team to play in Brooklyn, at least for the first season, King said.