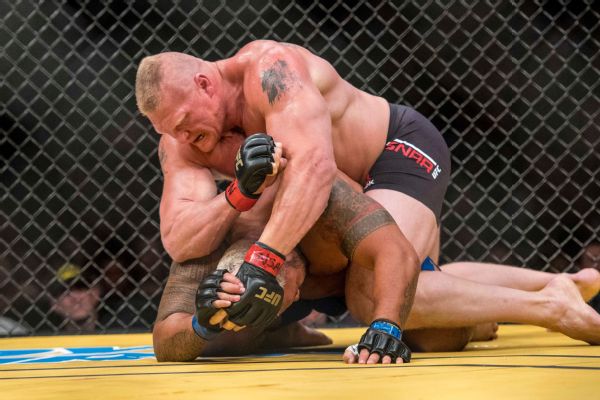 Lesnar (5-3), who did not appear before the commission, was also fined $250,000 of his disclosed $2.5 million purse. The sanctions were part of a signed settlement between Lesnar and the NSAC executive director. The NSAC voted unanimously in favor of the settlement on Thursday.

A professional wrestling star and former UFC champion, Lesnar fought in the Octagon for the first time since 2011 at UFC 200, defeating Hunt via unanimous decision.

Lesnar was not pulled from the event because the results of his prefight test were not available on fight night. The result of his victory over Hunt has been overturned to a no contest. His one-year suspension is dated retroactively to July 9. He has not indicated whether he intends to fight MMA again.

Per the settlement agreement, Lesnar does not admit liability in the failed tests. Lesnar "vehemently denied" knowingly taking any banned substances in public documents submitted to the NSAC by his attorney Howard Jacobs.

As a previously retired fighter, Lesnar was supposed to be subjected to a four-month drug-testing window under the UFC's anti-doping program with the United States Anti-Doping Agency. The UFC waived that requirement, however, citing "exceptional circumstances."

Hunt (12-10-1), whose disclosed purse at UFC 200 was $700,000, has demanded financial relief for the situation he was placed in. The New Zealand native has retained San Diego attorney Christina Denning on the matter.

According to Denning, her firm intended to address the commission on Thursday but was not privy to the terms of Lesnar's settlement ahead of time.