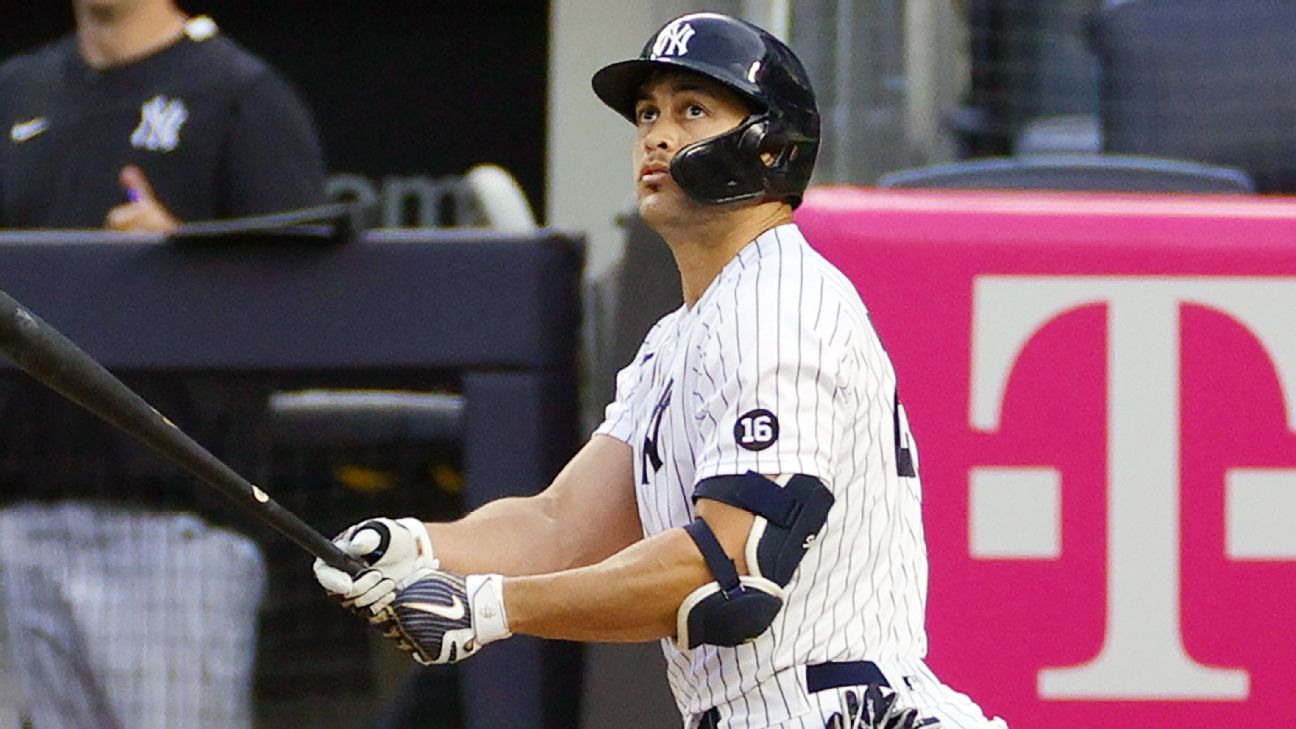 BALTIMORE -- In addition to a COVID-19 outbreak, injuries have started piling up for the New York Yankees, with Giancarlo Stanton and Aaron Hicks out of the lineup for Friday night's series-opening, 5-4 win against the Baltimore Orioles.

Stanton was scratched about an hour before first pitch due to left quad tightness, the club announced, replacing him with catcher Gary Sanchez batting fourth in the DH spot.


Manager Aaron Boone said postgame that Stanton is day-to-day and could miss a couple of games.The slugger told Boone that he felt the tightness during an at-bat in the Tampa Bay series finale Thursday, and during his pregame preparation Friday, and wanted to "get ahead of it."

"We'll just kind of see how he's doing tomorrow, the next day, and go from there," Boone said. "I don't want to put a timetable on it other than say it's day-to-day, and we'll see how he is tomorrow and Sunday. He could be down a couple days, but I'm hoping it's not more than that."

Boone also revealed during his pregame media availability that Hicks, who had undergone imaging after having soreness in his left wrist, was diagnosed with a torn tendon sheath.

Stanton's career in pinstripes has had a seemingly never-ending list of trips to the IL. Nonetheless, this season he has been one of the few shining spots in a Yankees lineup that has failed to live up to expectations. Stanton is the Yankees' leader in almost every offensive category, including home runs (9), RBIs (24) and slugging (.534%).

Boone had said before the game that he was so encouraged by Stanton's conditioning that the team was considering having him work out in the outfield. The slugger has been deployed solely at DH in the 33 games he has started this season.


"He's our best hitter. He's our main man in the middle of the lineup, the guy that's won us a lot of games, saved us in a lot of games," Aaron Judge said. "I'm not really too concerned with what he's got going on. He knows how to handle his body and he's being smart about it. To lose a guy like that, that would hurt, but the next man would have to step up and do their job. But I don't expect us to lose Big G anytime soon."

Boone said that Hicks, a switch-hitting 31-year-old, is currently taking anti-inflammatory medication to treat the wrist injury, which might require just an IL stint or even allow him to return to the lineup in the next few days. But Hicks also could need season-ending surgery.

"The MRI did reveal that he tore the sheath that holds the tendon in place," Boone said. "He started some medicine, and we'll see how he responds in the next couple of days. Sometimes that works and kind of declares itself at that point. Surgery could be on the table at some point, as well. But we won't know that for a couple of days. I think it could go either way. In these cases, it seems like a lot of times, the medicine works and knocks it out. If not, then surgery could be on the table."

Boone said that Hicks' type of injury cannot be traced back to a particular play, and that it could have happened even up to "a couple of years ago." A torn wrist tendon sheath is an injury similar to the one suffered by former Yankees first baseman Mark Teixeira in 2013, which allowed him to play all but 15 games that season.


In other injury news, Rougned Odor, who is eligible to come off the 10-day IL on Saturday, has not fully recovered from a right knee sprain. Boone said Odor could return during the Yankees' four-game set against the Texas Rangers later in the week but hinted that his return was more likely to happen during the club's next homestand. The Yankees traded for Odor after the Rangers designated him for assignment ahead of the start of the 2021 season.

It wasn't all bad news on the injury front for the Yankees on Friday, with Boone announcing that he expected shortstop Gleyber Torres, who was placed on the COVID-19 IL after testing positive for the coronavirus Thursday, to return to the team "real soon."

The Yankees are still dealing with a coronavirus outbreak that has affected eight members of their traveling party, including first-base coach Reggie Willits, third-base coach Phil Nevin and pitching coach Matt Blake. Torres is the only player to have tested positive during the club's current outbreak.

Boone did say that one of the individuals who tested positive has already registered at least one negative test, but did not name that person. Players who test positive for COVID-19 have to isolate for a minimum of 10 days, but the MLB/MLBPA joint committee is able to clear them earlier if they are completely asymptomatic and have multiple negative laboratory PCR tests.
Report a correction or typo
Related topics:
sportsespngleyber torresnewsmlbgiancarlo stantonnew york yankeesaaron hicks
Copyright © 2021 ESPN Internet Ventures. All rights reserved.
TOP STORIES
Voting hours, the candidates and more to know about NYC's mayoral primary
NYC Primary: What is ranked choice voting?
When will we know who wins NYC's mayoral primary?
Here's why each of the 8 Democrats say they want to be mayor of NYC
AccuWeather: Mostly sunny, but watch for rip currents at the beach
GOP filibuster halts Democrats' signature voting bill
Exclusive: Video shows huge fireworks explosion in Upper Manhattan
Show More
Tourist punched, hit with bottle in unprovoked assault on subway
NYC subway station gets makeover for Meryl Streep's birthday
Houston hospital says 153 employees who refused COVID vaccine have resigned or been fired
Adams picture found at polling site, other minor issues on Primary Day
Corbin Bleu announced as 2021 Jimmy Awards host
More TOP STORIES News