New York's season is over, but the questions are never-ending 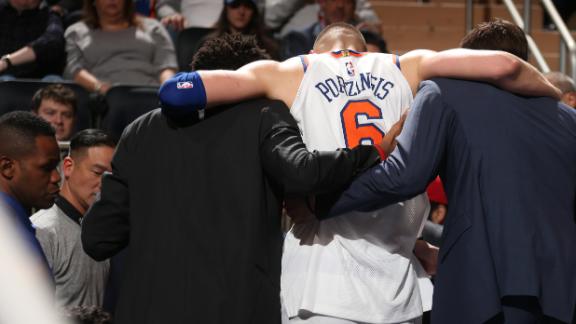 Kristaps Porzingis is expected to be out at least 10 months following his ACL surgery last week. What kind of team will he come back to?

Before the New York Knicks' star returns to the court, team president Steve Mills and general manager Scott Perry will make several decisions that could alter the course of what has been a mostly dysfunctional franchise for the past 18 years.

Below, we take a look at the to-do list for the Knicks in the wake of the Porzingis injury and why they have an opportunity to return to relevance after so much drama and disappointment.

What are the Knicks' options in the draft?

At 23-36, the Knicks have the ninth-lowest win percentage in the league. Assuming they finish in that spot -- they could very well drop further, given Porzingis' absence -- it would guarantee New York a pick no lower than 12th in the 2018 NBA draft. Perry has said that New York will be prepared for any and all scenarios as the draft approaches.

To that end, New York, like most other teams, has already sent personnel to scouttop point guard prospect Luka Doncic, according to sources. Some in the organization are also high on Michigan State forward Miles Bridges and Villanova wing Mikal Bridges, sources say.

It's too early to say with any accuracy whom the Knicks will target in the draft, given that we don't know how the pingpong balls will bounce. But in previous transactions, Perry has shown that he is open to acquiring the best talent available, regardless of position -- after all, he dealt for Emmanuel Mudiayat the trade deadline with rookie Frank Ntilikinaalready on the roster, and he acquired a fourth center, Enes Kanter, in the Carmelo Anthony trade. So it wouldn't be surprising if the Knicks took the best prospect available in late June.

With Porzingis expected to miss a good portion of the 2018-19 season, New York could have a high pick in the 2019 draft as well. Assuming Porzingis returns at full health, the Knicks have the opportunity to surround him with three lottery picks: Ntilikina and their 2018 and 2019 first-rounders. It has been a while since the Knicks attempted to build their roster in earnest through the draft, but that's the most effective tool for them at this point. Like most other rebuilding teams, their goal is to build primarily through the draft and be ready to contend at an elite level once the Golden State Warriors and LeBron James-led teams are finished battling for NBA dominance,according to opposing executives familiar with the matter.

The Knicks are well on their way to a fourth consecutive 50-loss season, so the idea that they'll be competitive in the near future might seem absurd at this point. But in the wake of Porzingis' injury, there is a clear path forward for New York. If management drafts well and Porzingis returns to pre-injury form, the Knicks should have a solid young core around the 7-foot-3 All-Star, one that could attract bigger-name free agents as well.

There are many variables at play, but New York could have at least $30 million in cap space in the summer of 2019 if the Knicks renounce the rights to all of their free agents that summer and remove all non-guaranteed money from their books (which are some big "ifs").

That number could change if they sign Porzingis to a new deal this summer. Porzingis is eligible for a five-year, $157 million extension, with a starting salary of $27 million. If New York decides to wait and offer Porzingis an extension in the summer of 2019, it would create an additional $10 million in cap space for the club.

If the Knicks sign Porzingis to an extension this summer, they could still have around $20 million in space (again, assuming they renounce their rights to all free agents). But the $10 million could be the difference between affording a max-salary player and affording a second-tier free agent,assuming the Knicks would be in the market for that kind of player. New York could also create cap space by trading a veteran such asCourtney Lee prior to the summer of 2019.

Regarding the extension, it's unclear how Porzingis' injury impacts the timing of the Knicks' offer. Prior to the ACL tear, the Knicks likely felt comfortable offering Porzingis the extension this summer. Now, they might follow the blueprint the Philadelphia 76ers established with Joel Embiid and construct a contract that is incentivized based on health.

It's also unclear if the bad blood between the organization and Porzingis from the summer of 2017 is still a factor at this point, but the Knicks are optimistic that all parties have moved forward and are on the same page. Porzingis has said that he'll address his feelings on the extension at the appropriate time but wants to remain in New York.

The Knicks still see Porzingis as a franchise cornerstone, despite the injury.

"He is obviously a very important member of this basketball team and this organization and part of this New York community," Perry said earlier this month after Porzingis' injury. "We'll deal with at that appropriate time."

Regardless of how things play out with Porzingis' extension, the Knicks should have significant money to spend in the summer of 2020. New York currently has Tim Hardaway's $18.9 million player option and Ntilikina's $6.1 million team option on the books for that summer. You can add salaries for the 2018 and 2019 draft picks, Porzingis' extension and, presumably, whichever free agents the team adds in the next two offseasons. Either way, New York should have plenty to spend that summer.

How will the Joakim Noah stalemate shake out?

The Knicks can also create cap space over the next two summers by stretching Joakim Noah's contract. Doing so would reduce his cap hit to $7,565,000 over the next five years, beginning in 2018-19 and ending in 2022-23. But that would eat into money that the Knicks could spend on other free agents in the summer of 2020 and beyond. It's not something the Knicks have seriously considered at this point, per sources.

Noah has been away from the Knicks since late January, amid what the team has called a mutual decision between the player and the organization. Knicks coach Jeff Hornacek said Tuesday that the plan, for the foreseeable future, is to have Noah remain away from the team.

"He's ready to move on and maybe have an opportunity somewhere else," Hornacek said.

The club feels that Noah would have a negative impact in the locker room following his heated argument with Hornacek last month (ESPN's Adrian Wojnarowski reported that the two had to be separated after the argument). The best-case scenario for the Knicks is that Noah agrees to a buyout, giving back some of the nearly $55 million he is owed over the remainder of his contract.

As of late last week, Noah remained opposed to any buyout, per sources. One date to watch here is March 1, the last date by which Noah can sign with another team and still be eligible for the postseason. The Knicks, to this point, have shown no interest in simply waiving Noah, so it seems that it will be a test of wills as March approaches. If Noah is bought out or waived, opposing executives expect the Oklahoma City Thunder and Minnesota Timberwolves to be among the teams interested in signing him.

Is Hornacek a lame-duck coach at this point?

Hornacek's contract is up after the 2018-19 season, and Perry has said that he and Mills will evaluate Hornacek -- and all other aspects of the organization -- after the season. Hornacek was hired by former Knicks president Phil Jackson, so it certainly wouldn't be a surprise if Hornacek is let go by the club's new management after this season.

"We're evaluating the entire season," Perry said earlier this month. "Jeff and his group are working really hard with this basketball team and doing the very best they can, and obviously, this is an adversity for them to deal with KP being out.

"But I'm confident that they'll be able to do a good job of keeping this team playing hard and playing together. That's what we'll be looking at moving forward."

Hornacek will have a chance to show that he is the right coach to lead the team forward over the final two months of the season. Recent results, though, haven't been pretty. New York has dropped eight in a row and has won just seven of its past 30 games.

Perry and Mills have said consistently that they wanted to see this year's team show improvement on defense. The Knicks enter play Thursday ranked 18th in defensive rating, up seven spots from last season. They have had some poor outings on defense, but there hasn't been an extended stretch in which it was obvious that the club wasn't giving enough effort. Where that leaves Hornacek after the season is unclear.

Some players have privately grumbled about Hornacek's rotations, according to sources familiar with the matter, but Hornacek was given the freedom to run his own offense and was handed an imbalanced roster and tasked with trying to fight for a playoff spot while developing young players.

It's premature to speculate on where the Knicks might go if they decide to let Hornacek go after the season. The group of available candidates could include Jason Kidd, David Fizdale, David Blatt, Monty Williams and current ESPN broadcaster and former Warriors coach Mark Jackson, who has strong relationships with several people in the Knicks organization. San Antonio Spurs assistant Ettore Messina will likely draw interest from teams with vacancies as well.

In addition to the 2018 draft, deciding on the right coach moving forward -- whether it's Hornacek or someone else -- is the most pivotal decision facing Mills and Perry over the next few months.

Will the Knicks be able to develop their young talent?

In a more general sense, the Knicks also need establish -- or re-establish -- a strong player development program. Mills and Perry hope to continue to acquire young talent via the draft, free agency or low-risk trades such as the Mudiay deal. It's incumbent upon the organization to then develop these players as part of the club's young core or as attractive assets to opposing organizations. Knicks executive Craig Robinson was hired by Mills and Perry over the summer to lead the organization's player development program.

"[Robinson] is doing an excellent job spearheading our efforts," Perry said, "making sure that we have goals for each and every player, sitting with coaching staff and each individual player, establishing goals, watching film."

New York has a spotty record of player development as a whole but found success under former head coach Derek Fisher, who tasked assistants Josh Longstaff and Dave Bliss with running player development. Players on 10-day contracts, such asLangston Galloway and Lance Thomas, thrived in the program, as did Porzingis and undrafted free agent Ron Baker.

New York hopes to have similar success with Ntilikina, Mudiay, Trey Burke, Luke Kornet, Damyean Dotson and Isaiah Hicks. These players will likely have increased roles in the final weeks of the season as the Knicks evaluate who fits their long-term vision and who doesn't.

Knicks' old issues are new again
Keith Olbermann breaks down the circus that is the New York Knicks following the injury to Kristaps Porzingis. 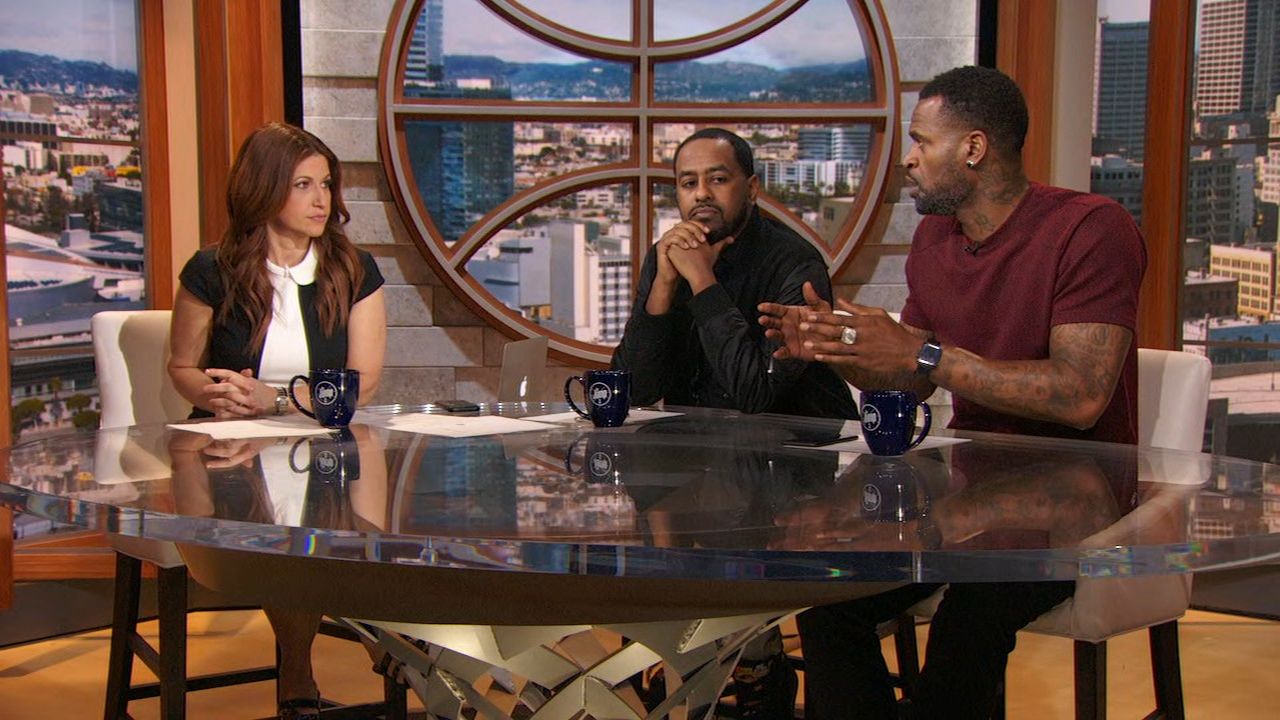