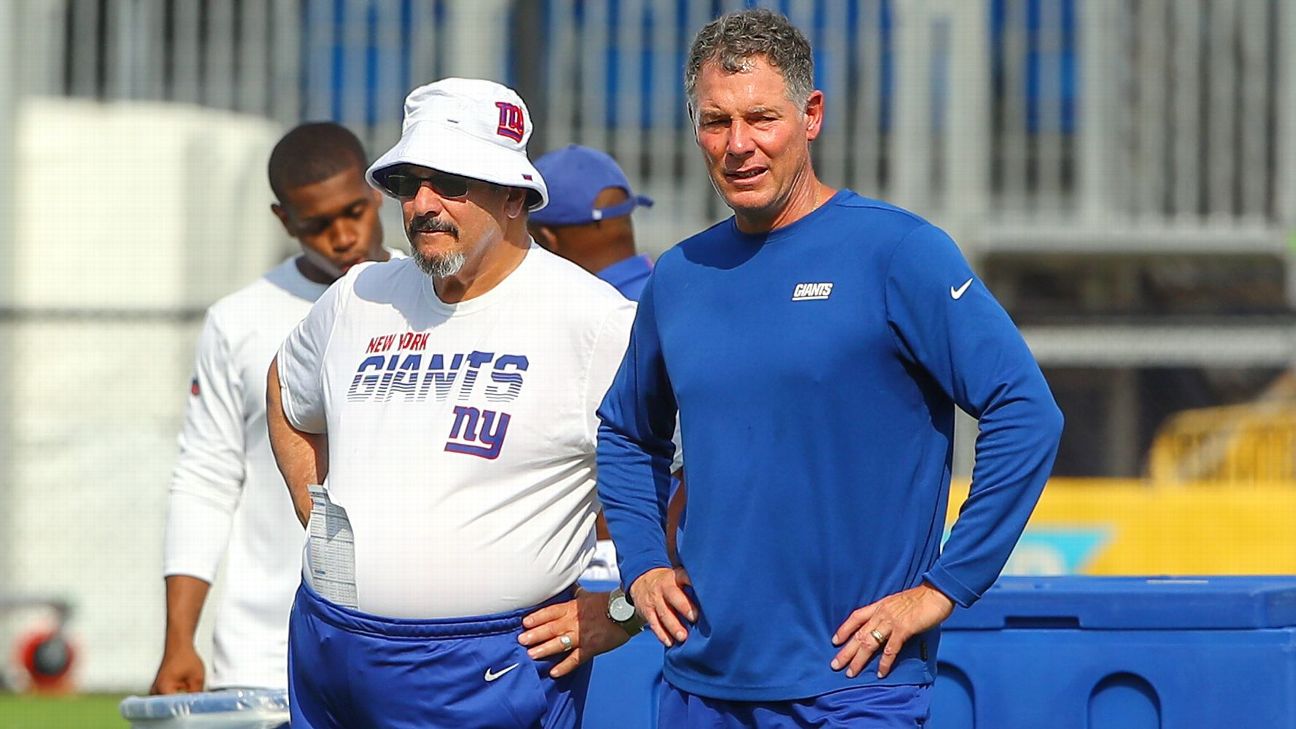 It's a rare NFL week when the Jacksonville Jaguars are the biggest newsmakers, but it sure was noisy around Duval County this week. First, the NFL Players Association announced that it had won an arbitration grievance against the Jaguars over the team's practice of fining players for skipping non-mandatory offseason time at the team facility. Two days later, the Jaguars fired Tom Coughlin, who as executive vice president of football operations for the past three seasons oversaw the strict program against which players and their union had been chafing.

Multiple sources close to the situation said there was a chance Coughlin, 73, was going to step away voluntarily at the end of the season in the interest of family time. And even if he wasn't, it's possible the NFLPA's scathing announcement, which suggested its members consider the Jaguars' recent history of player grievances when selecting their next team, merely hastened a decision team ownership was planning to make in a couple of weeks.

The Jags went to the AFC Championship Game in Coughlin's first season as executive VP but are 10-20 since then, and the disappointment of this season extends beyond the field. The failure of the Nick Foles contract to deliver the short-term jolt they thought it would, the defection of star cornerback Jalen Ramsey, who forced his way out of town over a dispute with Coughlin ... the plan wasn't working, and regardless of which side ended up making the decision, a parting was beginning to seem likely.

The easy instant reaction, of course, is to say that Grumpy Old Tom was done in by his inability to adjust to today's players -- an oversimplification that manages to insult him as well as them. The value of discipline isn't necessarily an outdated concept, and insisting that their employers honor their collectively bargained rights doesn't make players spoiled. Coughlin was wrong to require players to be at the facility when they didn't have to be, but his Hall of Fame-caliber record as a coach in Jacksonville and with the New York Giants refutes the notion that he doesn't understand how to motivate young people. He made some mistakes over the past couple of years, the experiment didn't work, and now they move on. A front-office tale as old as time.

The question in Jacksonville is: What happens now? The team didn't fire general manager Dave Caldwell or coach Doug Marrone, both of whom have been in their positions longer than Coughlin was in his. But that doesn't mean they won't do that when the season ends in 10 days. Sources say Jaguars owner Shad Khan thinks highly of Marrone, who joined the team as offensive line coach in 2015 and became interim head coach during the 2016 season. But we've discussed coaching-carousel possibilities in this space a few times already this year, so let's focus instead on front offices.

If Khan thought Caldwell was doing a great job three years ago, it stands to reason that he wouldn't have felt the need to bring in Coughlin. So there's uncertainty, at the very least, in Jacksonville, where whoever's running the front office -- be it Caldwell or someone else -- will have to navigate some significant hurdles in the coming offseason. What to do about Foles, who still has a fully guaranteed $15.125 million salary and a $21.875 million cap hit for 2020, leads a list of thorny salary-cap questions. An extension for star defensive end Yannick Ngakoue has to be addressed. Will the Jaguars pick up running back Leonard Fournette's 2021 fifth-year option? Could he get an extension?

If Jaguars ownership perceives the team as being at a crossroads, or having to dig out of a tricky financial hole, then major change isn't out of the question. There wasn't a lot of front-office turnover in the NFL last offseason, but this offseason could bring about big change in a few interesting places in addition to Jacksonville. Examples:

Bruce Allen has been there since 2010, in roles that have included GM, executive VP and team president. The team is 62-97-1 in that time. Only Tampa Bay, Jacksonville and Cleveland have fewer wins since Allen arrived in Washington.

His relationship with owner Daniel Snyder has long been thought of as the sort to make Allen somewhat invincible, but there's a lot of chatter around this situation about the potential that Snyder might make a change. Washington already fired coach Jay Gruden and will look for a permanent replacement this offseason. It's entirely possible Snyder could bring in a new GM to help make the selection.

Having fired coach Ron Rivera, Panthers owner David Tepper seems inclined to keep GM Marty Hurney, which feels like a smart move given Hurney's experience and his success as a drafter. Tepper did say, on the day he fired Rivera, that he planned to hire an executive VP of football operations and an assistant GM. It's possible that the former would be someone who'd work over Hurney in a dynamic similar to that of Coughlin and Caldwell in Jacksonville over the past three years, but sources seem to think that both positions would be under Hurney and perhaps the executive VP would be a younger executive working toward an eventual GM job there or elsewhere.

Tepper's Pittsburgh connections have industry people talking about him trying to swipe some folks from the Steelers' front office, with someone like Steelers VP of football and business administration Omar Khan a possibility. There's also some chatter about Tepper trying to lure away Steelers GM Kevin Colbert, though it's unclear what kind of impact that kind of move would have on Hurney's status.

The Giants aren't usually the kind of team that lacks patience, but things have been so bad in the two years under GM Dave Gettleman that people around the league are wondering whether owners John Mara and Steve Tisch might hit the reset button again. Obviously, the status of coach Pat Shurmur is worth watching. But if the Giants, who have made the playoffs once in the past eight years and lost more games than any other team in the league since the start of the 2017 season, ever decide to make a major overhaul in the way they do business, Gettleman could find himself in trouble.

The bet here is that the Giants are too much of a family business to do anything drastic, and that Gettleman gets a chance to draft Ohio State pass-rusher Chase Young for the defense as he builds around Daniel Jones and Saquon Barkley on offense. But it's ugly right now in East Rutherford, New Jersey, and no one is happy with the way things are going.

It's not ugly in Houston, where the Texans sit on the cusp of another division title and coach Bill O'Brien is heading up the front office. But there remains a chance of at least a minor shake-up in roles in the Houston front office, especially if the Texans can succeed this time around in luring Patriots player personnel director Nick Caserio, whose contract New England has tried and failed to extend. Caserio is a free agent this offseason.

One of the NFL's most disappointing teams this season, the Falcons have a messy salary-cap situation. And while the hot-seat watch has focused on coach Dan Quinn for months, it's not out of the question that GM Thomas Dimitroff could pay the price for the team's financial quandaries.

If you're wondering whom teams might hire for any front-office vacancies that come up, keep an eye on Caserio, who could be in play in places other than Houston if things don't work out there. Former Chiefs GM and Patriots and Falcons exec Scott Pioli is out there, and his background in those places indicates he seems to deserve another chance to run a building at some point. Rick Smith, who was GM of the Texans from 2006-17, is said to want back into the league and could be a candidate in a couple of these spots due to his experience.

Former Dolphins GM Jeff Ireland has been the Saints' assistant GM since 2015 and gets a lot of credit for New Orleans' draft successes over that time. People are going to want to speculate about Buffalo executive Dan Morgan for Carolina because he played there, but don't ignore Titans VP/player personnel Ryan Cowden, who came from the Panthers' front office, as a possibility there.

Current front-office execs who are seen as potential future GMs include Cleveland's Eliot Wolf, Minnesota's George Paton, Indianapolis' Ed Dodds, Dallas' Will McClay and Seattle's Scott Fitterer and Trent Kirchner. This has not been meant to be an exhaustive list, just a run-through of examples of the kinds of names you might hear connected with potentially open jobs. Someone like Dimitroff, if the Falcons were to let him go, could end up getting a look elsewhere as well.

A couple of other loose ends from this week:

If Ryan Tannehill gets a contract extension from the Titans this offseason, industry sources expect it to be similar in size and structure to the one Foles signed with the Jaguars last offseason. That would be four years, $88 million with $41.25 million guaranteed, all in the first two years. Maybe add a couple of bucks for inflation, maybe knock off a few because he's not on the open market, maybe play with the guarantee structure. But that's the general idea.

The Titans also will have to decide whether to sign running back Derrick Henry, a tricky situation to be sure, given the peculiarities and stubbornness of the running back market and the potential long-term durability issues Henry's physical, pounding running style could create. One thing to keep in mind -- if there's no new collective bargaining agreement by March, teams will be able to use the franchise tag on one player and the transition tag on another this offseason. That means the Titans could conceivably hold both Tannehill and Henry off the market if they wanted to. Same with Dak Prescott and Amari Cooper in Dallas and Jameis Winston and Shaq Barrett in Tampa Bay.

How the NFL could follow in the MLB's footsteps

Major League Baseball's announcement that it will no longer test for marijuana is of interest to NFL folks. My understanding, which comes via sources, is that the drug policy is one of those elements of the next CBA that has largely been agreed to pending agreement on the top-line issues of revenue split and expanded regular season. Once the owners and players agree on those two issues -- and it could be a while -- the rest of the deal could come together quickly, and my expectation is that one of the changes will be a revamped marijuana policy.

I don't think it will go as far as baseball has, to the point of not testing at all. I think the NFL and the NFLPA want to go to a model similar to the one the NHL uses, where they still test for marijuana but don't punish for it. The idea is to use the testing for diagnostic purposes -- i.e., if they see a spike in usage, they'd investigate to see if it indicates a larger problem. Is a guy hiding an injury? Is he dealing with some kind of other issue for which he might need some help? That kind of stuff. But I would expect marijuana suspensions to become a thing of the past in the new CBA. 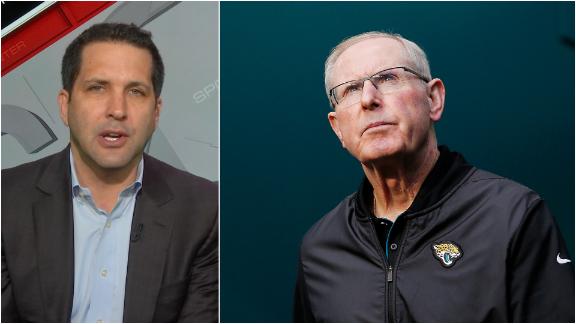 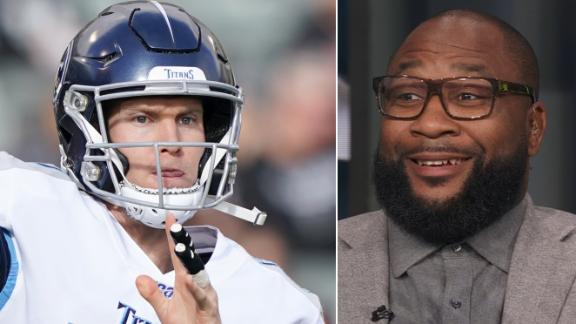 Spears: Tannehill has become Titans' identity
Marcus Spears and Dan Orlovsky reflect on the dynamic of the Titans' offense as they prepare to face the Texans in a key AFC South matchup. 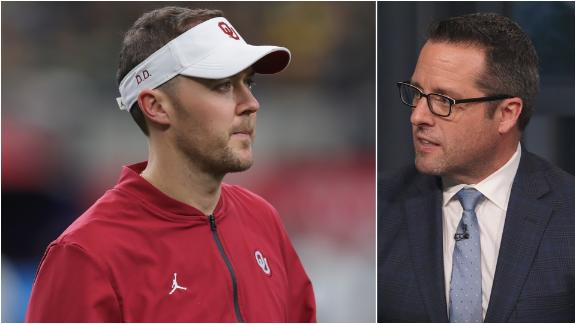 Graziano: Riley would be highly coveted in NFL if he chose to go
Dan Graziano breaks down some prospects -- including Lincoln Riley, if he chooses to make himself available -- who will be top candidates for upcoming NFL head-coaching openings. 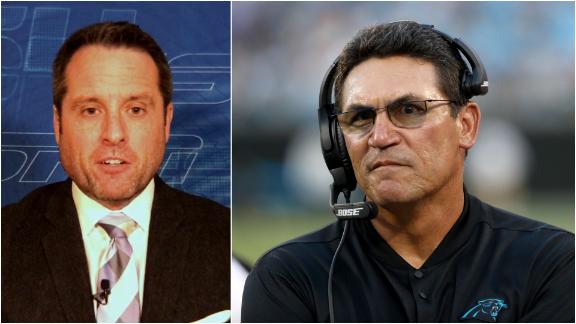